Using his sword to send the victim to a dimension where his/her worst fears become reality.

Unleash horror throughout the human world.

The Fright Knight is a ghostly knight that is described as the Spirit of Halloween and a villain in the Danny Phantom cartoon series.

The Fright Knight is a ruthless warrior, living to instill all who oppose him with fear and if this has no effect, he prefers to use his superior combat skills. He often works with anyone who can benefit him and has a flair for being dramatic, doing things dramatically and declaring things in rhyme.

During his time as a servant of Pariah Dark, the Fright Knight was seen bringing him the Crown of Fire and during the ghost king's defeat, he was sealed away, but was released many years later by Danny Phantom. He took the Fright Knight's sword, the Soul Shredder, so he could use it in a Halloween haunted house decoration competition between him and Dash in order to avoid detention. However this released the Fright Knight from his pumpkin prison and he chased Danny back to Amity Park, where he got his sword back. With the Soul Shredder back, he turned Amity Park into a nightmare realm, however Danny managed to discover how to reseal the Fright Knight. He plunged the knight's sword back into a pumpkin and spoke the incantation to seal him away once more.

However Danny Phantom had not seen the last of the Fright Knight and when Pariah Dark was freed once more by Vlad Plasmius, the knight was released by his master. He and the ghost king's skeleton army were sent to Amity Park to retrieve the Ring of Rage for Pariah Dark. After facing of against Danny, Valerie Gray, and Vlad, the Fright Knight drove his sword into the ground, claiming the town for the ghost king. If someone were to remove it, it would be a sign of surrender to Pariah Dark, which Danny did, not knowing the consequences and despite being warned not to by even Vlad himself, and sent Amity Park to the Ghost Zone. However, the Fright Knight eventually stood alongside the ghosts united against the ghost king and seemed to have made a deal with Vlad, standing next to him as he locked Pariah Dark in the Sarcophagus of Forever Sleep.

In the alternate timeline, the Fright Knight worked for his new master Dark Danny, appearing to help him attack Amity Park in the future. He attacks Valerie after the Ghost Shield goes down and basically chases her into Fenton Works. He later appeared in a dream of Danny's while under Nocturne's influence and later appearing in the series final helped Danny along with countless other ghosts to turn the planet intangible in order to save it from the Disasteroid.

The Fright Knight is quite powerful and possesses superhuman strength and durability, able to take most physical attacks without flinching. He can turn intangible, shoot beams from his eyes, teleport by disappearing, leaving behind a cloud of bats, and fly, but usually relies on his fearsome steed, Nightmare, for this.

The Fright Knight wields the Soul Shredder, which can fire energy blasts, transform objects and people into monsters, reflect ectoplasmic energy blasts, generate invulnerable shields, and, when he strikes people with it, send people into a nightmare dimension where they are subjected to their worst fear. 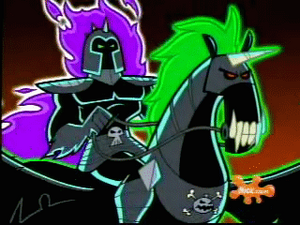 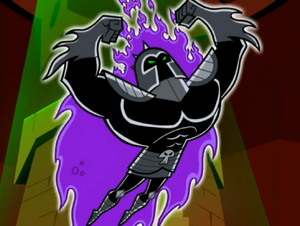 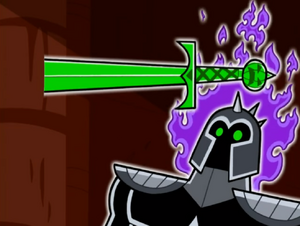 Pariah Dark throws his sword at he Fright Knight. 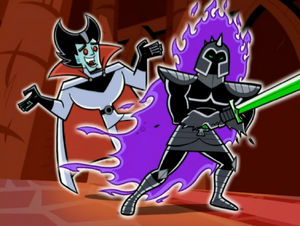 Vlad Plasmius attempting to make a deal with the Fright Knight. 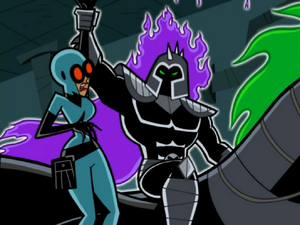 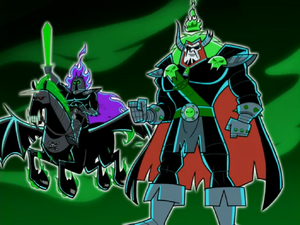 Fright Knight in the Alternate Future 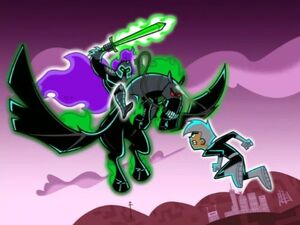 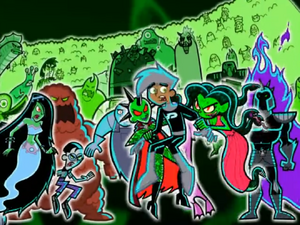 Fright Knight amongst the countless of ghosts attacking Danny in the Ghost Zone for trying to make them help. 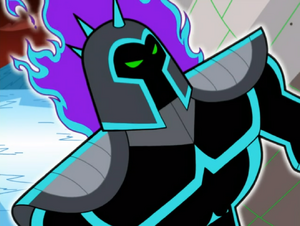