Frigimon (also known as Yukidarumon in the Japanese version) is a minor antagonist in Digimon Adventure 01, 02 and Digimon Fusion.

Frigimon is a Champion Level Digimon that resembles a white bear made out of snow. They have two red buttons and their eyes and nose are black.

When Devimon separated the Digidestined, Tai and Agumon encountered a Frigimon with a Black Gear stuck on his back. Since Agumon was to weak and couldn't Digivolve he had to improvise to how he was going to fight Frigimon. By tricking Frigimon, Agumon manage to grab onto Frigimon's back. He used his Pepper Breath attack and destroy the Black Gear. Frigimon offered Tai and Agumon his help by finding Matt and Gabumon, finding food, and help fight a Mojyamon with a Black Gear stuck on it's chest. He later returns to help the Digidestined fight the last Dark Master; Piedmon.

A large amount of Frigimon were under the influence of the Digimon Emperor. They all fought the Digidestined but were easily defeated by Flamedramon, Nefertimon and Pegasusmon.

Four Frigimon were members of the Bagra Army. In this version, the Frigimon are refered to as Yukidarumon. They served one of the generals; AncientVolcanomon. Instead of being used for fighting, they were used to cool down AncientVolcamon so he wouldn't erupt and destroy everyone in the process. Their current location after AncientVolcamon's defeat is unknown. 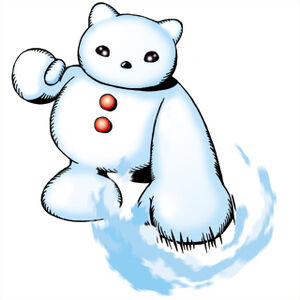 Retrieved from "https://villains.fandom.com/wiki/Frigimon?oldid=4006985"
Community content is available under CC-BY-SA unless otherwise noted.