The Frill-neck Monster is a unnamed member of Ludo's Army and a minor antagonist in Star vs. the Forces of Evil.

The Frill-neck monster first appears in "Quest Buy" as one of the monsters that accompanies Ludo to Quest Buy to help him search an Electric Beak Shiner. He tries to buy an object but Ludo slaps it out of his hand. When they run into Star and Marco, an epic chase and fight begins which results in causing a lot of damage to the store much to the anger of the sloth clerks. Later, he gets taken away by the Minotaur Woman into a cart. It is unknown how he managed to escape her and return to Ludo.

In the beginning of "Lobster Claws" he and the other monsters fight Star and Marco. He and Bearicorn dogpile on Marco, giving the chance for Lobster Claws to steal Star's wand, but he accidentally rips of Beard Deer's left antler instead. Soon he gets blasted with fiery cupcakes along with the other monsters.

In "Fortune Cookies", he is having a dance off with the Two-Headed Monster, then Boo Fly secretly putts a kick me sign on the back of him, he gets kicked by the Lizard Monster and is send flying to the other monsters who then push him on to Beard Deer, knocking him over which then starts a brawl between the monsters. Later, when Toffee sets up a trap for Star and Marco, Frill-neck monster and Two-Headed monster are disguised as break dances to distract Star. Who later reveal themselves when the other monsters come out of hiding.

In "Mewnipendence Day", after Buff Frog loses his espionage to Toffee he fears he might lose his job as second-in-command to one of the other monsters like the Frill-neck monster.

His last appearance was in "Storm the Castle" as one of the many monsters serving Toffee now. When Star uses the whispering spell to destroy her wand the Frill-neck monster is caught in the explosion. It's unknown if he died or survived.

In "Out of Business", it is revealed that the Frill-neck monster survived the explosion, as he is one of the many customers during Quest Buy's going out of business sale. 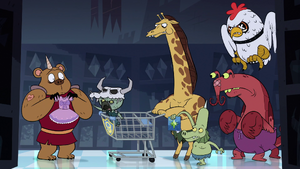 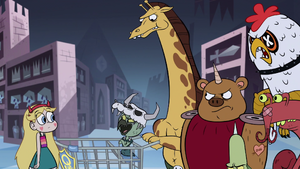 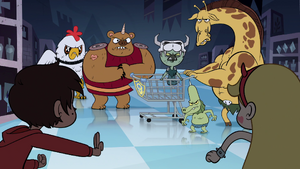 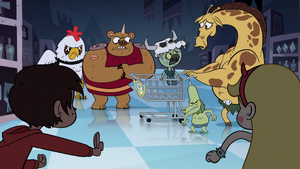 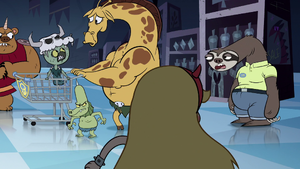 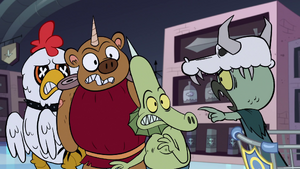 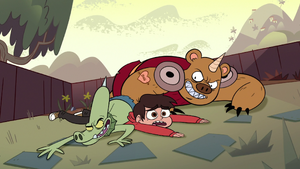 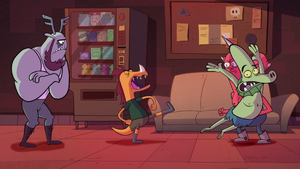