Fritz Fantom is one of the recurring main antagonists in the Austrian TV show "Die heiße Spur" or, as it's later called, "Tom Turbo" as well as the primary main antagonist of it's movie adaption "Tom Turbo - Von 0 auf 111" (which means "from 0 to 111", a reference to Tom having 111 tricks). He's also an occasional villain in the "Tom Turbo"-books which the TV show and the movie are based on, however, not to the extend of his TV appearances. He's the archenemy of the show's main character, Tom Turbo, a bike that works as a detective, and is a megalomaniac who seeks to become the greatest criminal mastermind ever.

During the TV-show, he appears in most episodes due to being Tom's archenemy.

During the classic series known as "Die heiße Spur", he, like many villains of the show, follows the show's concept of being in disguise for most time in the episode while carrying out his scheme before revealing himself near the end. However, there were also many episodes were he was committing his crimes without being disguised as somebody else, simply wearing his usual purple costume. Notably, some episodes featured imposters dressing up as him to frame him for their crimes. His base of operation was the Austrian sewerage, however he also tended to temporarily have other lairs.

When the show was renamed into "Tom Turbo", Fritz Fantom changed his lair. First, he lived in a bakery, but during the course of the show from 2001 to 2013, he soon evolved from the small-time criminal he was in the classic show (despite being Tom's arch-nemesis) into a great and powerful villain, featured by the changing design of his costume as well as him living in modern towers or castles, sending minions to do his bidding while sitting back in his lair now instead of becoming active like in the old show, although he sometimes still acted outside of his lair, but those cases began to cease during the show's progress. This also resulted in him not featuring his disguise abilities any more, something that was now a trait of his henchmen instead.

In the movie, Fritz Fantom (not yet wearing his purple costume) is seen along with his friend, Rudi Rat, who just got many things from his uncle, another evil inventor. Fritz' aunt Freda takes a box full of things and brings it to a woman who is about to sell them on a flea market. Just at this point, the video tape of Rudi's uncle tells them that one of the things in the box, a ball called "Tom Tempra", can help Rudi in finally making the robot which he's currently building for Fritz come to life and obey him. Fritz sends Rudi to the flea market, but he's too late as the family Klicker buys the ball. Fritz dresses himself in his purple costume for the first time in the movie and reveals his plan to Freda: with the robot Rudi is building for him, he wants to plunder Vienna and become the most powerful criminal of them all. However, he's soon informed that Rudi failed to get it from the flea market, so he sends him after the Klicker family. After Rudi's second attempt has failed, Fritz, displeased with his friend's failures, decides to become active himself. He disguises himself as a British agent who claims that the ball has been stolen. However, even after he manages to get it from Mr. Klicker, the ball melts a hole into the sidecar of Rudi's motorcycle and rolls back to the house. Fritz later orders Rudi to hack the car of Mr. Klicker's girlfriend Emma and kidnaps her, demanding the ball in return. Mr. Klicker's children, Karo and Klaro, who have meanwhile used the Tom Tempra to give life to their self-made bicycle Tom Turbo, which they originally created for the author Thomas Brezina (Tom's boss in the TV-show), use Tom as a vehicle to save Emma. Meanwhile, Rudi tried to activate the robot without the ball, which results in the robot being out of control until it stops due to a lack of energy. When the kids and Tom arrive, Fritz Fantom sends Rudi to get them, but Rudi fails. After Mr. Klicker arrived as well, Fritz and Rudi attempt to get them one last time, but Tom uses one of his 111 tricks to defeat them. Afterwards, they were most likely send to prison.

In "Die heiße Spur", Fritz had a bit of a childish personality and was, to some extend, a very incompetent criminal. For example, he was constantly called a failure by his grandfather and his aunt, and in one episode he's featured reading comic books. He was also featured to be easily scared in many episodes. However, he was very determined when it came to his plans, tending to tell his plans in a monologue like many villains of the show did. He was also extremely arrogant, calling himself the greatest criminal ever on many occasions, despite the fact that in most episodes, he was rather a small-time criminal carrying out other people's orders for money) as well as commenting on how angry at was at those who were more powerful than himself, like Don Dynamite.

In "Tom Turbo", he slowly lost all his childish aspects, but what remained from the classic show was his arrogance, which still made him call himself the greatest criminal, however now those statements were turning true as he was slowly evolving into a powerful criminal mastermind with a great lair instead of the small criminal living in the sewers he was in the classic series. He also had a tendency of calling himself invincible whenever he thought that he had won or Tom was pretending to be afraid of him, only be shown wrong mere minutes later. Just like his relatives, he tended to call his minions failures if they couldn't carry out their tasks properly.

In the movie "Von auf 111", he was kind of a mix of those two: he still was a megalomaniac, but now he also spotted childish features such as playing video games rather than to learn how to steal and caressing a teddy bear when sitting in his chair and placing his symbol, a mirrored F, all across a globe featuring his lust for power as well. Like in both shows, he was very impatient and unforgiving with minions, in this case Rudi Rat.

Fritz Fantom in the movie 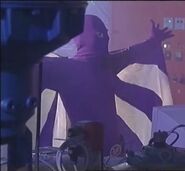 Fritz Fantom's Evil Gloating in the TV-show
Add a photo to this gallery
Retrieved from "https://villains.fandom.com/wiki/Fritz_Fantom?oldid=2440139"
Community content is available under CC-BY-SA unless otherwise noted.