Villains Wiki
Register
Don't have an account?
Sign In
Advertisement
in: Mature, Doctors and Scientists, Comedy Villains,
and 32 more

Defeat his son.
Find the "perfect joke" (both succeeded).

The mad scientist in the stop-motion animated sketch comedy series Robot Chicken, Fritz Hühnermörder appears in the opening sequence as the main antagonist. The sequence begins with him going outside his castle and finding a road-killed chicken which he takes to his lab and brings it back to life as a cyborg (the robot chicken). He then straps the bird into a chair and forces him to watch bad TV shows forever as a strange form of torture.

His regular voice is given by David Lynch and his singing voice is done by Les Claypool.

In the one hundredth episode, the Robot Chicken manages to escape after the maid releases him so that she can clean his chair. In response, the Mad Scientist abducts the chicken's wife (leaving behind a video so that he'll be aware of what happened) and begins torturing her in the same fashion in order to lure him into a trap.

The Robot Chicken then crushes him underneath the television sets he was forced to watch previously, killing him. Afterwards, his head is seen on a table as the Robot Chicken and his wife rejoice.

Shortly thereafter, he is revived by Robot Chicken as a cyborg and made to endure the same torture to which Robot Chicken was previously subjected.

However, some time later, his son comes around to rip out his remaining eye to access his laboratory and later kidnaps the US presidents for ransom. As a result, Fritz and Chicken are forced to team up to defeat the young man. After they kill his son's minions and save the presidents, Fritz punishes his son by subjecting him to the same torture that he, Chicken and the presidents suffered while Chicken flies away free.

In season nine finale, the Nerd jumps over the Grand Canyon with a motorcycle for the sake of ensuring the show's renewal. He succeeds but at the cost of crashing into a truck, resulting in an explosion that kills him. Shortly thereafter, Fritz and Robot Chicken dig up his corpse and revive him as a cyborg before forcing him to watch TVs.

After some time passes, Fritz talks in a science conference where he reveals that his forcing Robot Chicken and later the Nerd to watch TVs was for the sake of research into what is the "perfect" joke. After presenting his findings, he frees the Nerd from the chair, then puts him in a crate and delivers him to a warehouse. 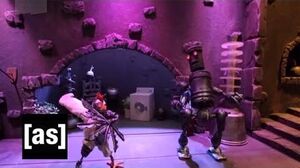