Frost is the main antagonist of the chick tract "Dark Dungeons".

In the film adaption, she was played by Tracy Hyland.

Frost was a black-haired girl who was playing Dungeons & Dragons with these other girls, one being named Debbie. A girl named Marcie played as the character Black Leaf, and Frost declares her character to be dead after she had failed to find the poison trap. Marcie tries to desperately beg Frost to not let her character die, but Debbie coldly tells her that her character's dead, and that she should leave the house. After Debbie graduated to the 8th level, Frost thought it was time to teach her real power. She later uses her power to mind bend her father into letting her continue playing Dungeons & Dragons uninterrupted.

Debbie later received a text message from Marcie and she goes to her house to see her. She goes up to her room, and she discovers that she hung herself out of sorrow that her character had died in the game. When she told Frost that Marcie had committed suicide, Frost didn't care, just as long as Debbie kept role-playing as Elfstar. Debbie chooses to not be Elfstar anymore, and asks her friend Mike for help. Mike convinces Debbie to burn all of her Dungeons & Dragons material, and she does so.

Frost will most likely go to Hell since, according to Jack Chick, it is a death sentence.

Frost plays the same role in the film that she played in the tract. However in this film, she uses Debbie to summon Cthullu from the the Cthully Mythos, which almost works until Debbie becomes a Christian. 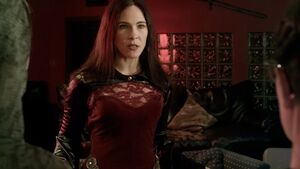 Frost from the 2014 film adaptation of Dark Dungeons.