Reclaim the Casket of Ancient Winters.
Subjugate the earth and plunge it into a new ice age.

The Frost Giants are recurring antagonists of the Thor comic series.

Of all the races of giants, the foremost enemies of the Asgardian gods are the Frost Giants, whose monarch is Utgard-Loki. The direct descendants of the first giant, Ymir, the Frost giants live in the area of Jotunheim whose climate resembles that of Earth's polar regions. Temperatures in this area never rise above the freezing point of water. The frost giants can exist comfortably at frigid temperatures but are highly vulnerable to heat. Although they can withstand the normal temperatures to be found in Asgard and in the temperate regions of Earth, intense heat causes them to shrink in size rapidly, as if they were melting. Long exposure to cold will eventually cause them to grow back to their previous size. The Frost Giants' powers are strongest in their own realm of Jotunheim, presumably due at least in part to the frigid climate of much of the realm.

The Frost Giants of this reality are a blue-skinned race with red eyes that stand at about 10' in height. As with their Earth-616 counterparts they have a profound tolerance for cold. They have also demonstrated the ability to spontaneously shape crude objects from ice, a talent often employed to create rudimentary crushing, or impaling weapons.

This race was once a war-faring race, under the leadership of Laufey, that led numerous attacks on the people of Earth until the Asgardians opposed them. They were eventually forced back to Jotunheim and defeated there. Odin granted them mercy however, and confiscated the source of their power, the Casket of Ancient Winters. He also took with him the abandoned jotun baby Loki, who grew up as a son to Odin. In the centuries that followed, Loki found out the truth of his parentage and tricked Laufey into assassinating Odin. Laufey was double-crossed and killed as part of a plan to curry favor with Odin, whereupon Loki attempted to annihilate the Jotuns by destroying their realm. This plan was foiled by the intervention of Loki's brother, Thor and while many Jotuns were killed in the incident, the race as a whole were spared. 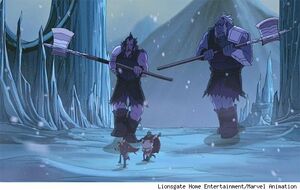 Frost Giants in Thor: The Tales of Asgard. 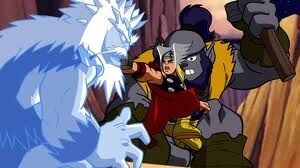 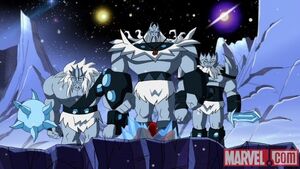 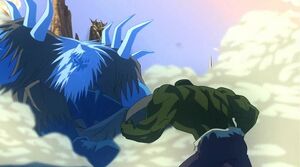 A Frost Giant in Hulk Vs. 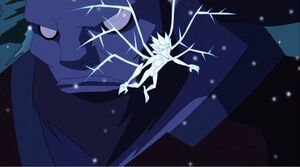 Frost Giant guard heard from the snow sprite that there were intruders in Jotunheim.