Rumbler of the Far North

Frost Walrus (Frost Kibatodos in Japan) is one of the eight Maverick bosses in Mega Man X4.

Frost Walrus was a violent and arrogant Maverick who loved causing destruction. He was marked for disposal due to his behavior, but General invited him to join Repliforce, allowing him to avoid being judged for his acts. When Repliforce starts their coup for independence, Walrus sees it as a great opportunity to cause as much mayhem as he wanted. He is stationed at Repliforce's snow base, where he guards the group's secret weapons under construction. X and Zero confronted him and with Repliforce losing their credibility to protect him, he was finally destroyed as intended.

Frost Walrus fights mainly by sliding on the floor, taking advantage of his humongous size. Upon taking some damage he will start shooting icicles from his shoulders, as well as breathing ice mist which forms giant chunks of ice, which then smash into the floor and makes various shards to fly all over the screen. Being a Ice-themed boss, he has a obvious weakness to fire weapons, in this case X's Rising Fire and Zero's Ryuenjin. 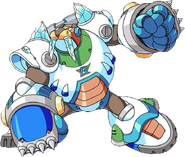