"A sweaty old costume" (By Peedee)

Possessed Costume
Frybo is the titular main antagonist of the Steven Universe episode of the same name. He's a mascot for the Beach Citywalk Fries dinner and was possessed by a gem by Steven in order to help his friend Peedee Fryman not wear it since he hated it. However, the costume became possessed and went out of control.

When Steven was going down the local sidewalk looking for Pearl, he ran into his friend Peedee who was wearing the costume and was being attacked by seagulls who confused the costume for having real french fries on them. Peedee told Steven how he hated the costume so Steven decided to help his friend by putting the shard of a gem in the costume after Steven tried but failed at wearing the costume itself. Frybo at first followed the orders the two of them gave him as he was able to convince Peedee's father that he was doing his job but he soon went insane. Moments later, Steven and Peedee ran back to the shop to discover that Frybo went insane and has begun ravaging the store and is seen stuffing french fries into peoples' mouths. Steven and Peedee get attacked by Frybo and are pinned down as Peedee's dad was thrown on top of them. Soon Pearl showed up in an attempt to stop Frybo and threw her spear at his eye only to have it spew out ketchup and mustard (blood) out of its eye, which causes both Pearl and Frybo to both falls back. Peedee attempts to save his dad by attacking Frybo only to be quickly defeated and is saved by Steven, who uses gems shards to turn his clothes into drones. Frybo is eventually pinned down by Steven, who pulls the gem shard (the source of Frybo's consciousness) out of Frybo's mouth, thus forever ending his terror spree.

Frybo is a tall costume that is a round container with a red apron and french fries on the top. When the costume is brought to life, the fries become tentacles and it grows french fry feet and red & blue veins.

Frybo is essentially the consciousness of a long-deceased gem emanating from a gem shard, which is possessing a costumed mascot. While possessing the suit, he is shown to have highly unstable and hostile behavior, which is seen in most other corrupted gem monsters. His one goal is to "give people fries", wan order that was given to him by Peedee. However, his determination to complete this task turned into a demonic obsession to stuff french fries down peoples' throats. This obsession is due to his corrupt nature. 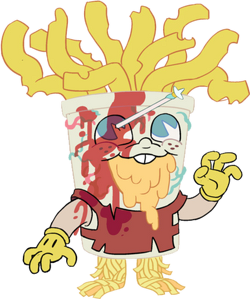 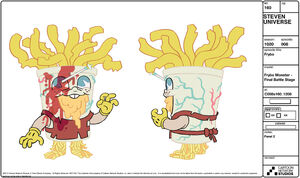 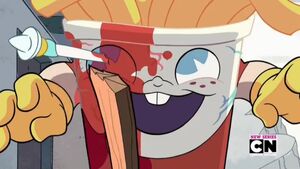 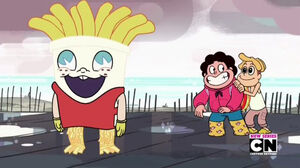 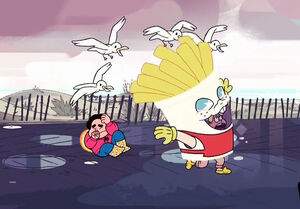