The Mystery of Dr. Fu-Manchu (novel)

To restore China to global primacy.

Fu Manchu, also called "Dr. Fu Manchu", is an infamous villain who originated in the novels of British author Sax Rohmer but has become somewhat of a stock character in fiction due to his popularity, and a very iconic villain overall.

Over the decades he's become a stereotype and an inspiration for countless other villains, and in more recent times he has been criticized by some as an example of the "Yellow Peril" stereotype. The Marvel Comics version called Zheng Zu serves as the main antagonist of the Shang Chi series where he is the arch-enemy and father of Shang Chi.

Dr. Fu Manchu shares traits that are common in all arch-villains such as cruelty, extreme intelligence and a hunger for power - he has been used in Marvel comics for a while but no longer appears in the comics due to the fact Marvel no longer own the rights to use him: however, Marvel gave Dr. Fu Manchu a son, who is a hero, whether this is canon outside the Marvel universe is unknown or not (though it seems likely it's the only canon for Marvel's version of the character). Marvel has replaced the character of Fu Manchu with Zheng Zu, though it's the same face and the history of Fu Manchu is his history, it apparently was simply a name he took.

Dr. Fu Manchu is an example of a mastermind and remains an iconic villain despite his considerable age as a character - have been appearing in varied formats for over 90 years. He has become an archetype of the evil criminal genius while lending the name to the Fu Manchu mustache. In films, he was played by the late Warner Orland, Boris Karloff, Christopher Lee, and Peter Sellers. He even appeared (unnamed) in The League of Extraordinary Gentlemen as a rival of Professor Moriarty.

Fu Manchu is a very ruthless man, but he has a sense of honor and his word is very important to him. Though partially out of his own desire for world domination, Fu Manchu has helped take down fascist dictators and communist regimes at times, making him a dark antihero. Fu Manchu never lets his underlings fail him twice, the only exception being his daughter, Fah Lo Suee, due to his fatherly love for her.

A very loosely adapted version of the character appears as the main antagonist of the Turkish Superman movie Demir Yumruk: Devler geliyor, in which he is portrayed as a wheelchair-bound transvestite crime lord seeking to use a Uranium deposit to rule the world.

Fu Manchu (true name, Zheng Zu) was born in the mid 19th century. He learned various scientific disciplines, the martial arts, and the esoteric arts at a monastery in China. Once he mastered all he could, he joined an ancient Chinese secret society, the Celestial Order of the Si-Fan.

By the early 20th century, he was the leader of the Si-Fan and has remained so ever since. Fu Manchu has attempted to take over either the United States or the world itself on several occasions, sometimes from behind the scenes and other times openly. In one of his earlier attempts in 1933, representatives of the League of Nations' were being mind-controlled by Fu Manchu but he was stopped by Denis Nayland Smith. The first known attempt by Fu Manchu in conquering the United States via the dispersal of a mind-control chemical into the atmosphere was defeated by his son, the hero Shang-Chi.

Afterward, he executed a plan to brainwash the population of the United States using television waves, but the operation was taken down by Shang-Chi and Spider-Man. Fu Manchu then attempted to start World War 3 by manipulating the United States and China into a war against each other, fortunately, he was foiled by Spider-Man, Iron Fist, and the Sons of the Tiger.

His most audacious plan was yet to come. Fu Manchu was going to knock the moon out of its orbit, which would result in cataclysmic effects on the Earth. Afterward, he would be able to use the opportunity to conquer the chaotic world. Shang-Chi working with the British intelligence agency (MI6) assaulted his subterranean mountain fortress city in the Arctic and then his space station, preventing the end of the world as they knew it. In the explosion on the space station, Fu Manchu appeared to die.

Fu Manchu returned and brought various secret societies together under his umbrella, which were the Hashishin (Middle East), the Templars (Europe), the Leopard Cult (South America), the Thugees (India), the Light-Seekers, the Followers of the Left-Hand Path (Satanic), the Three-Cornered Sight, and the Twenty-Third Sect. They joined his own Celestial Order of the Si-Fan in the Order of the Golden Dawn.

Using the Order of the Golden Dawn, Fu Manchu sowed confusion and fear around the world in an attempt to bring about chaos and eventually World War 3 by creating "UFO" incidents, mind-controlling the representatives of the UN, and attempting to detonate a nuke in the Big Apple. Shang-Chi was able to stop him before detonating the bomb. Years afterward, an old and ailing Fu Manchu apparently died.

For nearly two decades, he was believed dead. When he reemerged he appeared younger. Once again he threatened wold with a lightning ray weapon (Hellfire) that had the ability to destroy cities. Shang-Chi and the MI6 assaulted his Hellfire Base, destroying the weapon. Years later, Black Panther the Wakandan sovereign and Avenger team member, was on a tour of the United States in search of a wife. Fu Manchu offered his daughter to create an alliance between the two but was rejected and his forces clashed with the Black Panther and Luke Cage. The superheroes prevailed, and Fu Manchu withdrew with his daughter and forces.

Fu Manchu's Secret Empire (The Celestial Order of the Si-Fan) 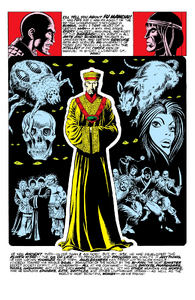 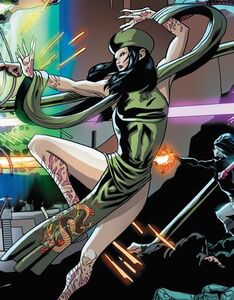 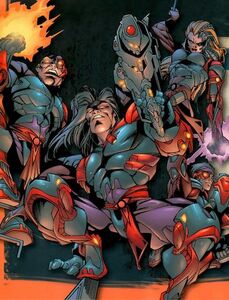 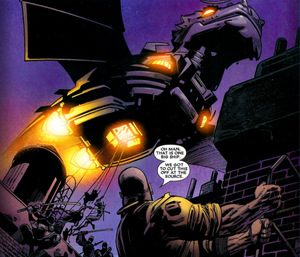 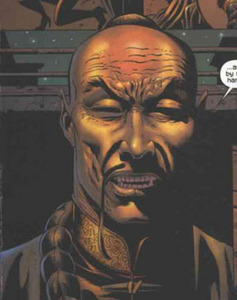 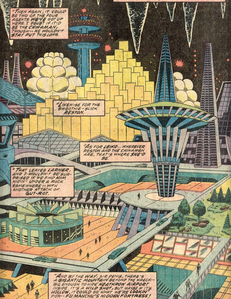 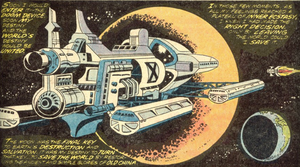 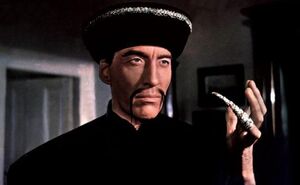 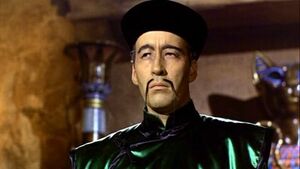 Christopher Lee as Fu Manchu in The Brides of Fu Manchu. 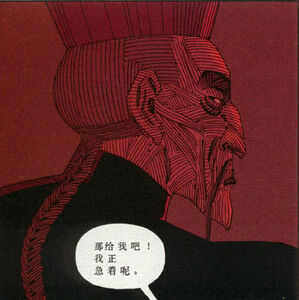 The Doctor aka Fu Manchu in The League of Extrordinary Gentlemen. 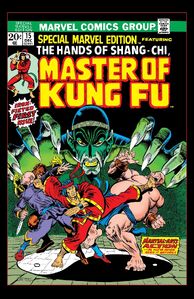 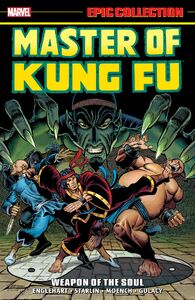