White Hero
Hero of the Beginning

Strengthen Lux's determination to be the excellent king.

Overthrow the Old Empire.
Helped Arshalia Rei Arcadia to create Sacred Eclipse.
Create a world that would bring salvation to the weak. (all succeeded although his death)

Fugil Arcadia (フギル・アーカディア Fugiru Ācadia) is the main antagonist of Undefeated Bahamut Chronicle. He was the Old Arcadia Empire former prince and was believed to be Lux Arcadia's elder half-brother from a different mother. But was revealed to be related to the Old Empire's imperial family from the ancient era. During his time of the Holy Arcadia Empire, he was known as an ultimate Drag-Knight at the empire and the original pilot of Bahamut

He was voiced by Ryota Ohsaka in the anime adaptation.

1000 years ago prior the story, the Holy Arcadia Empire considered Fugil a threat due of him being a member of the clan of traitors who had the highest aptitude for Drag-Rides. One day, Fugil saved animals from people who were torturing them as stress relief. Later, he was invited by a princess named Arshalia Rei Arcadia, the youngest princess of the empire, saw this and his kindness. She makes Fugil into her personal guard. Although Fugil still initially sees her as an enemy, they fell together and created Sacred Eclipse to the wish of mankind.

Before the current present, Lux Arcadia's family overthrew the empire and settle a new one, the Old Arcadia Empire.

Fugil and his girlfriend, Arshalia took part and became well-known in the history of the empire. Hand Arshalia conspired with the empire in order to save people who were mistreatment, eventually receiving the epithet "White Hero". However, Fugil would later removed his name in most of his records and identity during this era. After Fugil and his side had won, the Lords hid themselves in sleeping pods. Hundred of years later, the empire discovered the Lords' hiding place and attempted to kill them. Fugil rescue the Lords, but most of the servants were killed and except Mishis and Listelka was injured. Later, Fugil pretends to be the imperial family's first prince, and gained a reputation as an excellent Drag-Knight, but after being injured in an accident, he pretended to lose the ability to fight.

Years later, Fugil met Lux, during their training Lux was curious and asked Fugil's motive. He answered Lux's question that he wanted them to change the broken empire together. His motive was later untangle to find "someone" who would bring about salvation and justice upon humanity and that "someone" will also have a role as a great influencer in history. After Arshalia's death, he wonder around the world, even before he saved Listelka and her sisters. He gave his Leviathan to Singlen, over ten years prior to the present, Sacred Eclipse performed Baptism to to Greifer Nest who was barely alive, Tiamat to Lisha and Bahamut and Baptismto Lux during Old Arcadia Empire Downfall. Sacred Eclipse chooses Raffi Attismata and willing to seek power from him. Raffi fuses with Sacred Eclipse to escape from her blunder and compensate it.

Afterwards, both Fugil and Lux trained together to overthrow Arcadia Empire. Fugil strength Lux's body, gear leader Arshalia performed baptism to Lux so that he could use Bahamut. Fugil and Lux organized their plan and fought Arcadia's army. Fugil's true plan was to make Lux be the new emperor because he had noticed that Count Atismata would kill Lux for sure if Count Atismata survived in the end for political purpose. However, Raffi leaked his brother's plan to Arcadia's supporter, Waybra Hemt, who then reported it to the Emperor. Count Atismata's main plan did not go as expected.

Raffi's blunder attacked Atismata family, taking Airi as hostage and threatened Lisesharte to leaked the information. This caused her sister Almatea Atismata remained her status unknown and was believed to be dead. However, both of them were saved by Fugil during the downfall, which inflicted Almatea admired Lux as the "Black Hero". Once Lux gets to the palace, he tries to save Airi. But she was being threatened, so Fugil joins Lux and killed the army in the throne room. The emperor of the Old Arcadia Empire, Diseld Arcadia, was surprised to see Fugil eliminating the imperial guard because based on his documents, he saved the branch family who received bad treatment from the empire. This actually made Fugil slightly surprised that his origin was discovered. Fugil resumed his plan, he ordered Lux to announce that he had conspired with the Count Atismata. This was initially Fugil's main plan to make Lux to become the new emperor. However, Lux refused and lessen both casualties which men he disagreed his action to kill the his family. Lux attacks Fugil, but then lost to him, making Fugil disappointed of him and rethinking his new plans.

It is later revealed that Fugil was the one who defeated 1200 Drag-Rides of the Old Empire. Fugil transform into Bahamut and fought the Drag-Rides single-handedly. After defeating them, he altered Lux's memory, thinking believed he was the one who overthrown the Old Empire and defeated 1200 Drag-rides. Before he went missing, Lux asked him and told everything and also his expectation for Lux. However, Lux did not know what they were talking about. They later part ways as a farewell. The one last thing Fugil told Lux that he will be waiting for him to be a worthy ruler.

Fugil is seen watching Lux and his friends struggling against both Hayes and Yggdrafil. Lux's struggle causes him to further drives Fugil to look forward to his former sibling and future rival.

Fugil also attends the World Alliance Assembly in the New Kingdom, and meeting Listelka. He does not talk his mind and behaves like a normal individual. He then meets up with Lux after the assembly. Lux recalls Fugil's betrayal on the rebellion day.

As Lux and Aeril continued their journey for Avalon while combating numerous Abyss that infesting the Old Castle's first floor until they find a small room for their break. Meanwhile, Fugil and Listelka are keeping Lux and Aeril's tracks and via Mishis updates and Dragon Marauders' information.

After Seven Dragon Paladins had been defeated and Arshalia Rei Arcadia had appointed her to be, Fugil had the automatas to exterminate anything that will distort the new world.

Fugil observes which side will win the war. After Lux rescues Aeril and deinstalls Garden's Grand Force, Fugil stops the plan and is told by Raffi that Lux may not be the culprit. Fugil replies that it can not be someone else, while observing Lux and not helping Raffi. He later takes Yoruka to a save place without telling Raffi. Fugil later fails to overwriting history once again. So he intends to re-overwrites it due to the Grand Force that was stolen returned to him.

Fugil is a handsome young man with short silver hair and wears the attire of nobility.

Fugil started as a facade of a cheerful young man who cared a lot about his young brother Lux Arcadia. However, his true nature of his benevolence is a sinister side of his personality, willing to use anything and even anyone to achieve his goals. He is very manipulative towards others, when he uses Lux to destroy the Old Arcadia Empire. But strangely, he seems to take interest into Lux's progress, setting other various people such as Velvet Barth, Balzeride Kreutzer and even Hayes Vi Arcadia against him to witness his strength. His true reason was revealed to strengthen Lux's determination to be the new king of the Old Empire he has been looking for.

Before Lux was born, he was actually the second person that Fugil took interest to for the King of Salvation he has been looking, the first person he set his eyes on was Shinglen Shelbrit, but he rejected Fugil and his desire for hope. 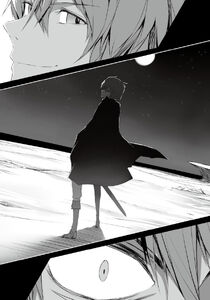 Lux seeing Fugil, causing him to remembering the betrayal. 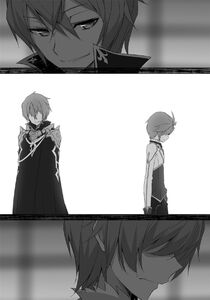 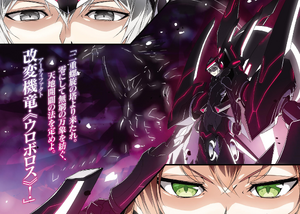 Fugil as the "Black Hero". 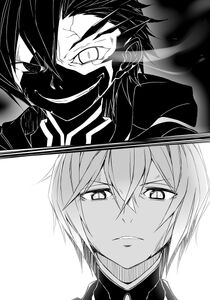 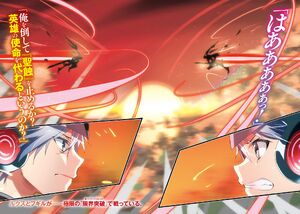 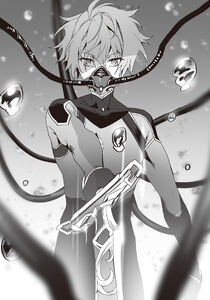 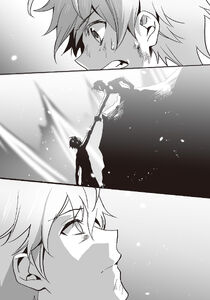 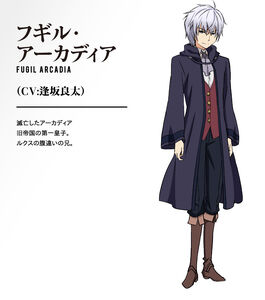 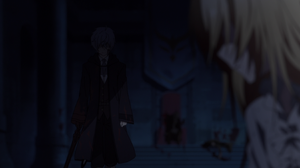 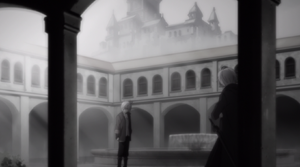 Lux with Fugil prior to the coup.
Add a photo to this gallery 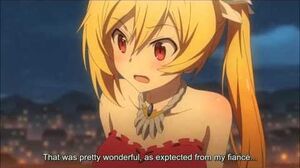 Saijaku Muhai no Bahamut ~ ENDING
Add a photo to this gallery
Retrieved from "https://villains.fandom.com/wiki/Fugil_Arcadia?oldid=3748895"
Community content is available under CC-BY-SA unless otherwise noted.