Fukua is the recurring antagonist from the 2012 indie combat game Skullgirls. She is the experiment of Brain Drain, which creates out to be a doppelgänger of Filia. A clone of Filia (along with the parasite Shamon, a clone of Samson), which contains two souls: one, the strongest in melee combat, and the second, the strongest in the distant. Anyway, this character is a joke and its existence is not a canon.

Fukua was created as a test for Robo-Fortune and was originally only a joke on April 1, 2014. On May 13, she became a regular character.

Her combat style is based on unused movements of Filia ("Zoner Filia" and "Grappler Filia"), because she was the very first character and there are quite a few things left for her.

It is a parody of the many "clones", repainted characters fighting games. The name Fukua is a typo in Filia. The name "Shamone" comes from the song of Michael Jackson "Bad", where instead of "come on" it was sung "shamone".

The design is completely identical to Filia, but the color scheme is different. It is based on the old game bug when the character suddenly turns green (Sonic the Hedgehog 2 and Mortal Kombat).

One of Brain Drain’s hobbies is cloning, and often he instills the souls of dead warriors in his clones. Fukua appeared as a result of a happy (or unlucky) set of circumstances, during an accident at Lab Zero. She is the result of the union of two souls: a mighty warrior and a quiet assassin. Together they use their best sides, but relationships formed in such extreme conditions usually do not last long.

Fukua, unlike other characters, smiles when she is finished off with a super blow. She enjoys the fight and loves to tease her opponents. All this suggests that she has some masochistic inclinations.

Since Fukua is a clone, most of her movements are the same as in Filia, but they work a little differently and the general style of combat is different. She has no dodging in the air, but there is a double jump. He has two shots, one of which cannot be knocked down. It can send forward shadow clones and energy balls, which allows you to keep the enemy at a distance.

All this makes it a universal fighter.

Fukua is a zoning character, but once she gets a hit, her clones enable very unique and powerful setplay. 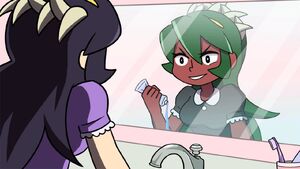 Fukua stalking Filia in the mirror. 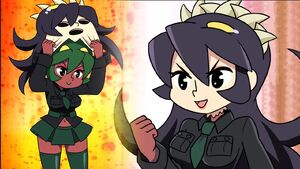 Fukua wake up of her dream. 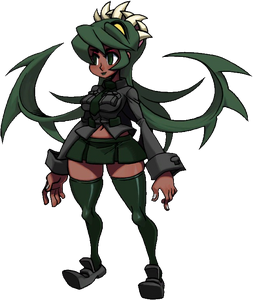 Retrieved from "https://villains.fandom.com/wiki/Fukua?oldid=2928967"
Community content is available under CC-BY-SA unless otherwise noted.