Fulgore is a character from Rare's Killer Instinct fighting series. He was a robot designed to test UltraTech's new capabilities.

Fulgore's first appearance was Killer Instinct. According to Fulgore's ending, he wins the tournament and mass production ensues. The Fulgore model that won the tournament is permanently shut down and put on display, the only humans left to view it are slaves. If you do not follow the Fulgore ending, then it ends that Jago ended the Model 1 Fulgore in the tournament.

Fulgore later returns in the sequel to yet again test his strength. Depending on which ending occurs, the same fate as the previous games is revealed (Fulgore taking over the Earth), or he is defeated by Jago and Orchid and is destroyed, along with Ultratech.

A third Fulgore model appears in Killer Instinct for Xbox One to help defend UltraTech against its enemies, acting as the final opponent of the game's arcade mode. However, it begins to develop self-awareness due to the residual memories of Eagle, Chief Thunder's disappeared younger brother, whose mind were used in its construction.

Bio: "Protocols reactivated. Enhanced system bootstrap complete. A new Fulgore prototype is online, with a singular directive: ELIMINATE ENEMIES TO ULTRATECH. However, the mind of the machine is different. It plans. It feels. It is aware. It is somehow... human".

Fulgore's appearance seems to be based off of an old English knight. His head and face resemble that of a knight's helmet and mask, his red eyes slanted into a death glare and no nose or mouth, though he seems to be able to make grunts and noises. One of the most dominant "knight" appearances is the feather-like extension protruding from the back of his head, as seen with most knight's helmets. The rest of his body is humanoid, having random circuitry and electrical tubing coming out of his neck and torso.

Endings in the Games

"The combat test of the Fulgore series assault cyborg has been a success. Mass production can now take place. After years of research, a weapon of awesome power is in the hands of Ultratech. The dawn of a robot controlled empire will soon begin. The first prototype model, Fulgore 1, is deactivated and placed in a museum. The only humans left to view it are now slaves."

"Defeating Gargos has opened the way towards a new and more Robot controlled Ultratech. Fulgore's program has run its course. The vengeance of Ultratech is complete with the death of Jago. All of Ultratech's enemies have fallen. Now none stand in the way of their deadliest weapon. Bent on armageddon, Fulgore builds his robotic army. A doomed Earth will soon fall to a merciless enemy."

2: Kill Jago but don't kill Orchid: "Defeating Gargos has opened the way towards a new and' more Robot controlled Ultratech. Fulgore's program has run its course. The vengeance of Ultratech is complete with the death of Jago. But other spared enemies lie in wait, eager to grasp vengeance and finish it once and for all. Although Fulgore rebuilds Ultratech, Orchid takes a warning to the future. A deadly strike by agents soon ends the Ultratech threat forever."

3: Kill Orchid but kill Jago: "Defeating Gargos has opened the way towards a new and more Robot controlled Ultratech. Fulgore's task lies incomplete and his deadly nemesis is still alive. The error of sparing his nemesis is soon apparent. Jago tracks down Fulgore for a final confrontation. Building modes of cyborgs, Fulgore fights an epic battle against the army raised by his nemesis. A final epic confrontation is inevitable. The fate of the world rests on the outcome..."

4: Don't kill Jago or Orchid: "Defeating Gargos has opened the way towards a new and more Robot controlled Ultratech. Fulgore's task lies incomplete and his deadly nemesis is still alive. The combined might of Jago and Orchid assails Fulgore. The price of failure is a high one. Fulgore's failure and destruction at the hands of Jago and Orchid has sealed the fate of Ultratech."

"PROTOTYPE. APPROVED. Echoes of a lost humanity have been purged from Fulgore's systems. The sum of what remains is a merciless machine, driven to destroy. Without a cycle spared to savor his victories, Fulgore begins a search for his next adversary."

"SYSTEM MALFUNCTION. KILLING BLOW ABORTED. How can a machine know mercy? Fulgore cannot ignore his imperative to destroy but human "memories" interfere with his machine logic. Unable to digest the echoes of a fighting spirit, Fulgore attempts to process his true nature."

"Thousands of Fulgores have been created, only to be destroyed, remade, and improved upon... But this one is different. Individuality and independence now race through his circuits. Still a killing machine, Fulgore rejects his coded imperatives and ponders his next target."

Fulgore is a powerful and influential opponent. Equipped with the artificial intelligence of a previous winner in the Killer Instinct Tournament; Black Eagle, Fulgore specializes in the Oki-Techa fighting style, which consist of multiple fighting styles including; judo, Taekwondo, and Hapkido combine with short ranged blades. Fulgore also possesses great physical strength, and reflexes. Fulgore also contains various other abilities including the quad-Plasma Claws, can generate lasers from his eyes, as well as plasma storm fireballs from his claws, possesses a cloaking device, a reflector, and a teleportation device known as a cyber port.

Fulgore also has four finishing moves known as No Mercies; The Turret Morph, Laser Site, Machine Morph, and Terminator. Inside Fulgore contains a Nuclear Reactor that controls partially everything in Fulgore's body. Fulgore can also manually charge up the nuclear reactor. When the reactor is fully charged, his strength, and speed get a doubled, as well as allowing him to unleash one of his most powerful moves; the Devastation Beam. 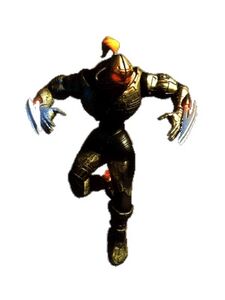 Add a photo to this gallery
Retrieved from "https://villains.fandom.com/wiki/Fulgore?oldid=3312744"
Community content is available under CC-BY-SA unless otherwise noted.