Fuminori Sakisaka is the main character of the 2003 Visual Novel Saya No Uta or Song of Saya written by Gen Urobuchi whom went on to write other great anime tragedies and psychological thrillers such as Puella Magi Madoka Magica, Fate/Zero, and Psycho Pass.

Fuminori Sakisaka is a completely normal human being whose life was turned into a living hell. After waking up in the hospital from a car accident and experimental operation that saved his life, he was left in a state of severe and exaggerated Agnosia where he perceives the world as a hellish landscape of gore, flesh, and pestilence. Even his close friends look like horrible monsters to him, but the only person that looks normal and beautiful to him is a mysterious girl he meets during his recovery in the hospital named Saya.

More in-depth information can be found on the page for Saya.

Fuminori Sakisaka is voiced by  Hikaru Midorikawa (credited as Hikaru).

Fuminori Sakisaka was a medical student at the University of Tokyo who sustained brain damage during an auto accident that killed his entire immediate family. The accident would have killed him if it were not for the intervention of a neurosurgeon named Dr. Masahiko Ogai who performed a risky experimental operation that saved his life. However there was a side effect, it caused an exaggerated form of Agnosia resulting in Fuminori perceiving the world as a twisted mirror of Earth, covered in blood and gore and people as horrific monsters shaped like amorphous, tentacled blobs of flesh, eyes, and mouths. Just as Fuminori's world is falling apart all around him and had decided to commit suicide once he would be discharged from the hospital, he meets a girl who introduces herself as Saya. Saya appears to Fumnori like a slightly abnormal but beautiful human girl, though in his mental state of mind she might as well had been an angel. In actuality, Saya is an extra-dimensional Eldritch horror similar in appearance to what Fuminori sees humans as, or possibly worse. Fuminori and Saya became very close and they began living together after Fuminori was discharged from the hospital. They spent most of their time trying to figure out Fuminori's odd mental condition and having an unnerving amount of sex from Fuminori's perspective. Saya began learning to cook and made many dishes to find any food Fuminori could stand to eat since his mental condition twisted his sense of taste as well. Later though, through an odd series of events he discoveres raw human flesh and organs taste great to him, although at first he had no idea what he was eating as he found that Saya ate the same thing. Saya and Fuminori went onto kill and eat several people including their neighbors and one of Fuminori's friends, a woman named Oumi Takahata. Saya even went as far to transform Yoh Tsukuba, another of Fuminori's friends, into one of her species, though it seemed Yoh's mind shattered from the extremely painful transformation.

There is one major uncertainty in the Visual Novel that sadly did not seemed to be answered by the end of the game. Dr. Ogai was the neurosurgeon who performed the new and experimental operation that saved Fuminori's life but left him in a mental state that made him see the whole world as made of gore and pestilence. Additionally, Dr. Ogai is also the person whom brought Saya into Earth's reality and cared deeply for Saya who he call his daughter. If he intended for Saya and Fuminori to find one another knowing that Fuminori would the only person that could see his daughter as beautiful and eventually fall in love with her it is sadly never stated outright.

There are three ending dependent on the choice the player makes for Fuminori and his best friend, Koji Tonoh during the story.

Back to Normal Ending

This ending is after a tragic scene where Saya is raped by one of Fuminori's neighbors, Yosuke Suzumi. Saya had tested her abilities on him in an attempted to understand and fix Fuminori's mental condition. She ended up giving him the same mental condition as Fuminori and this ended up shattering his sanity. Saya did not except this reaction and Fuminori walked in on Yosuke raping Saya. He immediately killed him with a knife in a fit of rage and consuled Saya. Saya afterward offers to change Fuminori back to normal as she had figured out what was wrong with him. If the player chooses this opition, Saya kisses him for the last time and her tongue seems to slide back into throat and up into his head and he passes out. When he wakes up his mental condition is gone and Saya is no way to be found. Fuminori realizes he was living as a cannibal, turns himself in, and is promptly thrown in a Mental hospital. After some time passes, Saya visits him on the other side of his cell door where he cannot see her. She uses a cell phone to message him in text to say goodbye for the last time. This is where Fuminori finally tells her for the first time that he loves her. Saya is certainly heart broken even though you cannot see her.

If the Player chooses to stay with his mental condition the story continues to the next set of choices.

Depending on the choice the player makes for Koji Tonoh after he discovers the body parts of Oumi Takahata in Fuminori's refrigerator and survives Fuminori trying to murder him by throwing him down a well he can make a phone call to two people: Fuminori or Ryoko Tanbo. This choice dictates which two endings the player will get.

Even though the heading says Humanity Wins Ending, this is often called the bad ending. Ryoko and Koji corner Saya and Fuminori at the abandoned house they are staying at and holding the abomination that was once Yoh as a slave. They kill Yoh and Ryoko then pours Liquid Nitrogen onto Saya. She hits Saya which makes a large portion of her break off and Saya screams in pain. Fuminori then shoots Ryoko in the face at point blank and kills her. Fuminori thinks Saya is dead and commits suicide by continually bashing his face into his own ax. Saya was not dead and has a tragic scene of crying out to him and is then killed by Koji whom wails on Saya with a metal pipe many times more than was needed. Koji is the sole survivor of the whole ordeal and lives the rest of his life as a paranoid schizophrenic. He continually sees hallucinations of Ryoko and Fuminori with the massive wounds they sustained at death. Being still sane enough to understand he's permanently psychologically damaged from what he's witnessed, he spends the rest of his life with a revolver with one bullet hidden in his bathroom, in case he ever reaches the point he can no longer stand to live with the insanity and kill himself.

Oddly enough, this is the good ending for the visual novel but the end result of this ending is the complete end of native life on Earth.

Koji calls up Fuminori and threatens him with the information he has found out about his cannibalism, Fuminori trying to kill him, and his somewhat limited knowledge of what Saya is. This leads down the story line to Koji foolishly going alone to the abandoned house Saya, Fuminori, and Yoh are staying at. Yoh jumps him crying out in a twisted voice wanting Koji to kill her, he does but does not even realize it was Yoh. He is then confronted by Fuminori where they fight and Koji get a well placed hit to Fuminori's ribs and breaks a few. Saya then drops from the ceiling and tackles Koji, breaks his neck, and devours him. Afterward, Saya keels over in pain which gets Fuminori frightened and takes her outside at Saya behest. She then blooms like a giant beautiful flower to Fuminori's eyes. She is hinted to have died in birthing her spores to infect the world and begin the process of changing all living creatures on earth into her species. The visual novel at this point leaves the player on a cliff hanger since whether or not Saya died from her blooming is not shown.

In the epilogue, Ryoko Tanbo has finished deciphering Dr. Ogai's journal and has already started to be transformed into one of Saya's species as the world is falling into choas. She even went as far to cut off one of her arms to slow the transformation, but begins to accept her fate as her mind is being manipulated by Saya's spores.

The person Fuminori Sakisaka was before the car accident and operation is dead and gone by the mid point of the game and by certainly the end of the visual novel. Furminori is a cynic, depressive, and highly unstable due to his mental condition. The only hope he has in the world is Saya and the comfort she brings him. His character, demeanor, and attitude changes dramatically when he is around her. He becomes exponentially protective of her as the story line goes on and also of Yoh after Saya changes her.

His attachment to her goes even further later down the visual novel's story line after he finds out Saya changed Yoh into one of her species and even says that she changed Yoh to be "like her". Fuminori now knows beyond a shadow of a doubt that Saya is not human but he does not seem to care too much. He is curious about what she is but his morality and sanity seems to have shifted so greatly that he does not think to much about his relationship with a creature that is not human and displays powers beyond any human medical science. He is too deep in love with Saya to question his relationship with her.

All 5 senses are effected by Fuminori's extreme Agnosia. He mentions that his sight was first thing that effected him when he woke up from the operation. He further details, that thankfully his other four sense took some time to succumb to the condition or he certainly would have not maintained his sanity as well. At least in the beginning.

Fuminori looks like an average university student at the outset of the game, though maybe suffering form a little malnutrition due to the fact that his mental condition making all normal human food taste beyond disgusting. As the story line continues though, he get skinnier and even gaunt after awhile. He begin to stop caring about hygiene, his appearance, and starts to have an mentally unstable look on his face. 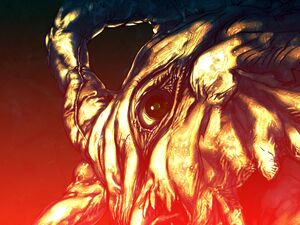 Through Fuminori's eyes, how he views human beings up close. 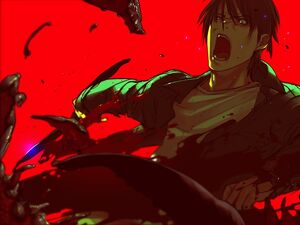 Fuminori killing Yosuke Suzumi in a fit of rage. 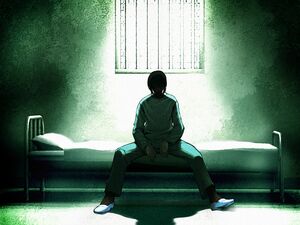 The last frame of the Back to Normal ending in Fuminori's cell. 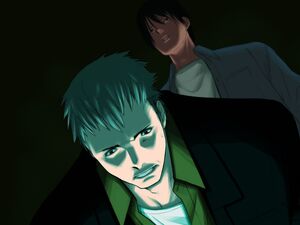 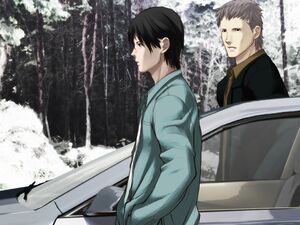 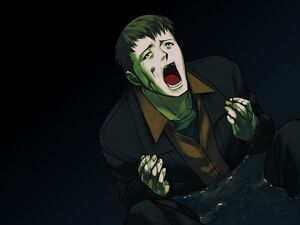 Koji Tonoh after Fuminori tried to murder him by pushing him into well. 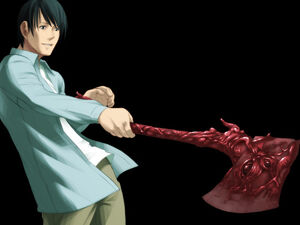 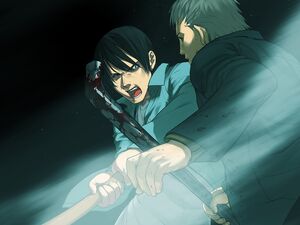 Fuminori and Koji Tonoh fighting. Fuminori with his ax and Koji with a metal pipe 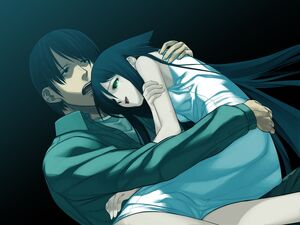 Fuminori holding Saya after she ate Koji before she began to bloom. 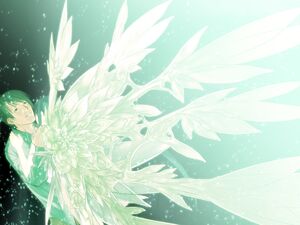 Fuminori mystified as Saya begins to bloom.
Add a photo to this gallery
Retrieved from "https://villains.fandom.com/wiki/Fuminori_Sakisaka?oldid=3312745"
Community content is available under CC-BY-SA unless otherwise noted.