Posing for the camera.

Funtime Chica is an animatronic that appears as a minor character in Freddy Fazbear's Pizzeria Simulator and as a minor antagonist in the Ultimate Custom Night. She is a variant of Chica the Chicken.

In Ultimate Custom Night, she is voiced by Becky Shrimpton.

Funtime Chica is a purchasable animatronic in this game, and is part of the Posh Pizzeria Animatronics set. She costs $71,000 to purchase.

Funtime Chica appears as an antagonist in this game. When activated, Funtime Chica tends to invade the office and spend her time in the spotlight, striking poses while accompanied by distracting camera flashes. Her camera flashes can disorient the player, allowing other animatronics to sneak into the office.

Funtime Chica seems to have dreams of stardom. She actually does not intend on causing the player problems but she cannot help but strike a pose whenever the camera's on her. 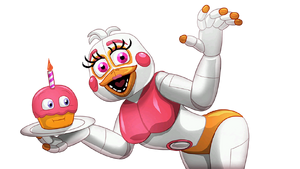 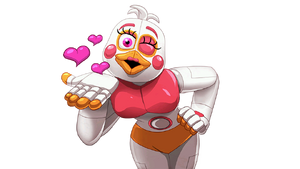 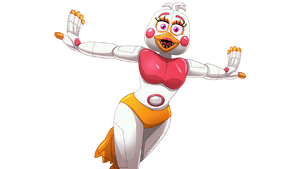 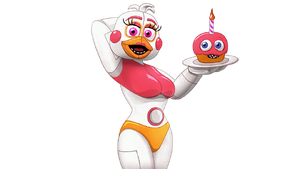 Retrieved from "https://villains.fandom.com/wiki/Funtime_Chica?oldid=3841083"
Community content is available under CC-BY-SA unless otherwise noted.