Find the energems for his master (failed)

He is known as the villain who separated Tyler from his father, captured Ivan and controlled the Ptera Zord.

In the finale of Dino Super Charge, he is killed with Sledge and the rest of his crew when they are sucked into a Black Hole. In the final battle between the Rangers and Sledge's Crew, in the past, Fury fights the Rangers (Shelby, Chase, Koda, Riley and Ivan) with Sledge and the Vivixes on Earth. He is defeated by Ivan and finds the container with the remaining five Energems. He gives it to Sledge but Tyler, who has rejoined the fight, has replaced the Energems with Keeper's bomb and Fury is killed by the explosion.

Fury will be finally destroyed for good with the rest of Sledge's Crew by the Power Rangers Beast Morphers.

True to his name, Fury is mad, wrathful, cantankerous, and filled with rage, although he keeps that feeling repressed to the point anyone could call his name ironic. As a pragmatic and levelheaded warrior and general to his cause, complete with a code of honor, Fury values brawn and brain equally. As with everyone, even the most reserved, Fury is still bound to get triggered.

Despite his deep respect for Sledge, he takes the scolding to heart to the point he would do anything to buy his master's favor, even goes so far to causes misfortune on three of the protagonists prior to the series began (separate James Navarro from his son Tyler when he discovered that he bonded with Aqua Energem and forced him to hiding, confined Ivan in his body due to bonding with Gold Energem, and indirectly froze Koda when he showed up when Koda and his brother being attacked by a sabertooth tiger just as they found Blue Energem). From there, his pride could get the best of him, dull his mind to the point that he would convince himself that Poisandra means nothing to Sledge.

When Heckyl took charge, Fury changed his conduct. Whereas he served Sledge out of respect, he worked under Heckyl out of fear. His relationships of servitude to Snide and Lord Arcanon were roughly the same as with Sledge and Heckyl, respectively.

The one person who has triggered him the most to date was Singe. It was the last straw for him after every hardship he was forced to face throughout the quest for the Energems. From there on, Fury was willing to burst and show everyone he has a voice, while still respecting the rules on the ship.

Fury can be recognized with red body armor that exposed his large maws on the chest that mostly closed at all times, yelow leather battle skirt and pants with stripes similar with that of tiger's, bladed gauntlets, clawed boots, and lion-like helmet, with branched horns. His weapon of choice is a seven-branched sword that capable of unleashing lightning-themed attacks. 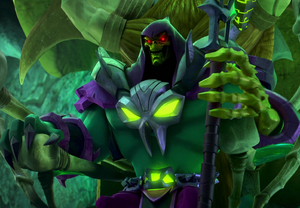 Fury's Death
Add a photo to this gallery

Retrieved from "https://villains.fandom.com/wiki/Fury_(Power_Rangers)?oldid=4287229"
Community content is available under CC-BY-SA unless otherwise noted.