Ability to turn people into puppets with his magic

Con as many people as possible to become his puppets (failed).

The "Great Fusilli", or better known as Fusilli, is an anthropomorphic alligator who serves as the main antagonist in the Courage the Cowardly Dog episode "The Great Fusilli".

He has a thick Italian accent (parodying other stereotypical magicians) and owns a traveling theater which he uses to search for potential "stars" to induct into his troupe, luring them in with the prospects of fame and fortune. Once his victims are snagged, Fusilli literally turns them into puppets that he can control via enchanted puppet strings, forcing them to perform on the stage for his own amusement.

He was voiced by Jim Cummings, who also played both Basil and Jean Bon in Courage the Cowardly Dog, Pete from Mickey Mouse & Co., Scar and Ed from Disney's The Lion King, Steele from Balto, and Hadrian from Minecraft: Story Mode.

Fusilli's escapades bring him to Nowhere, where he enacts the process on Muriel, Eustace, and Courage. Although even Courage seems to get comfortable with the role, he later discovers a room filled with the dozens of people Fusilli has turned into puppets (of which includes animals and seemingly normal people).

Although he tries to warn Muriel and Eustace, Fusilli manages to turn them into puppets, before trying to kill Courage directly. When an angered Courage (covered in white flour, making him appear like a ghost) confronts Fusilli, he mistakes Courage for a phantom and leaps off the stage in fright.

His own puppet strings activate and ironically convert Fusilli into a puppet himself.

Fusilli is a short dark brown alligator who wears a purple hat with a feather and a fuchsia cape, making him look like an actual magician. He has a long tail and his stomach is light green and dark green stripes.

Initially, Fusilli appears to be a sophisticated and friendly alligator, inviting people during his travels to join his theater and to perform some acts.

However, this is only to hide Fusilli's true nature. In reality, he is a cruel alligator who turns people into wooden puppets and plays with them for fun. Since it is possible that the "puppets" are dead, it's safe to assume that he killed several people during his travels and shows no remorse for it. Him playing with the "puppets" may also imply that he has necrophilia.

Despite his wicked and depraved nature, he is also cowardly, panicking when he sees Courage covered in powder, believing him to be a phantom, which even confuses Courage. He then jumps off the balcony to the stage, which the magic turns him into a wooden puppet as well, thus he finally receives his comeuppance for turning everyone else into wooden puppets. His fear of ghosts is indirectly responsible for his defeat and possible demise. Had Courage not have this miracle, Fusilli could have remorselessly killed him. 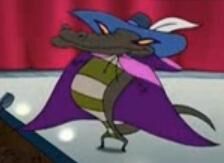 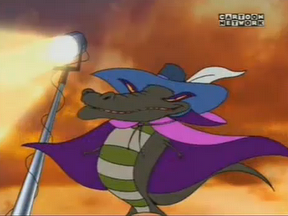 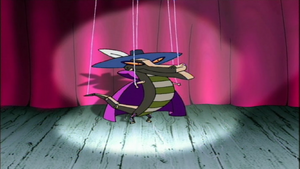