The Future Flash
The Flash

Seal the Speed-Force rupture by using his younger self as a sacrifice (somewhat succeeded).
Remake his future by killing Overload (failed).

The Future Flash is a villain from the DC Comics and is the main antagonist of the Out of Time storyline.

He is a version of Barry Allen/The Flash from an alternate future who blamed himself for the death of Wally West and became determined to prevent it. He starts with killing his enemies and use these actions to gain enough speed to travel back in time to correct his mistakes.

Realizing what needs to be done to fix his past mistakes, he goes off on a killing spree and executes his old enemies. Barry became a grim figure and was wracked with guilt over the failing to save Wally West. Barry tells the now crippled Iris West, that he will find a way to correct his errors. Now adopting a new armor, Future Flash starts by racing off to Gorilla City, challenging its carnivorous ruler Gorilla Grodd to a fight to the death. A poor match for Grodd's strength, speed, and savagery, Barry instead uses his powers to phase through the gorilla and leave behind a micro bomb which blows Grodd's head off. With this act, Barry sets himself on a course to make sure none of this future can happen by traveling back in time. Believing that his future can be averted by preventing Wally's death, Future Flash begins heading back to the fateful car accident.

Barry's first stop is sixteen years from now, where he confronts Mirror Master at the Museum of Natural History. Placing the guests into the Mirror World, Future Flash reveals that a freak earthquake would have shattered the mirrors and made Scudder a murderer. With the hostages now safe inside Mirror World, Allen heads to his next historical point and leaves Mirror Master to die in the quake. Future Flash pays a visit to Captain Cold twelve years from now. Thanks to the accident that merged Snart with his Cold Gun, the former Rogue is now dying of stage four bone cancer. After reminiscing about how Leonard surprised everyone with his stint as a Justice League member, Barry reveals that the Speed Force has broken. The efforts of Grodd, Reverse-Flash, and even Barry himself caused it to rupture; Allen has been losing time and failed to be where he was most needed. With this final meeting settled, Future Flash holds on to Cold's hands as his foe passes away.

Seven years from now, the Trickster, also known as Axel Walker, finds himself yanked off the street and dangled over a building ledge by Future Flash. Future Flash knows that Walker's latest scheme has dire consequences, and decides to drop the Rogue to his death. When Walker's robots catch him, Barry leaps onto his enemy to send them both to their doom. As Walker recants, Future Flash shows him how the upcoming robbery attempt would have killed an innocent family and eventually led to Trickster's own suicide. A tearful Trickster takes the Future Flash up on the offer of redemption, while the latter heads off towards his next destination.

Closing in on the Wally West accident, Future Flash heads to five years from now. While the actual Flash deals with a rock slide in Pakistan, the Future Flash arrives to confront Daniel West. As the men battle, Future Flash outlines the tragedy that Reverse Flash will cost. Filled with rage, Future Flash tears Daniel's head from his body just in time to prevent the accident that would have killed Wally. Seeing this act of murder, the Flash battles his future self only to be crippled by Future Flash. As the blue clad speedster heads to the present, a newly costumed Wally West takes up the Flash mantle in order to stop him.

Finally arriving in the present, Future Flash drags his past self out to the salts flats and the tear in the Speed Force. Revealing that he wants to sacrifice the Flash, using Barry's own energy to seal the rupture, the two speedsters duel. Future Flash gains the upper hand until the battle is interrupted by a speed empowered Wally West. The future Barry is still able to defeat both heroes, leading to Wally's demise and Barry's disappearance into the Speed Force tear. Now looking 20 years younger and trapped in the present, Future Flash seeks to remake his future.

Life As His Younger SelfEdit

Upon realizing of the de-aging effect he gained from changing the Speed Force, Future Flash takes advantage. He runs home and sweeps up Patty Spivot and kisses her. He agrees to spend some real quality time together with Patty later that night. During his time as his younger self, he reunites with Director Singh, Iris West and Wally West, and begins trying to jog his old memories to alter his future. During this time, Iris grows suspicious.

Barry later waits until Patty falls asleep and sneaks out to chase down a man called Kyle Korot, who will become a killer, though he hasn't yet. Barry remembers though, how this man was the straw that broke the camel's back for him, getting off on a technicality after killing eight people. Armed with the knowledge he has now, Barry can ensure that no murderer escapes justice by killing them, one by one.

Taking Over as The FlashEdit

After hundreds of homicide victims surface, Future Flash (as younger Barry) offers up to look after the bodies even if the cases will go unsolved. After Patty brings his attention to the death of Kyle Korot, he shrugs this off much to her shock. Unknown to him, she and Iris learn that Kyle was killed by a speedster and start suspecting him because the only other speedster is the currently imprisoned Daniel West.

Patty and Barry have dinner at a fancy restaurant, despite her anger with his callous behavior. Sheepishly, he admits that he was out of line, and frustrated by the issue with the bodies. She expresses her concern that the murder was committed by a speedster, and he promises to track down the killer - after finishing his date with the sexiest blood-spatter expert in the world.

After Future Flash (as the Flash) nearly kills Napalm during a bank heist committed by the latter and Mirror Master, Patty becomes horrified after learning from James Forrest about what "the Flash" nearly did and becomes more suspicious of him

Future Flash is trying to tie together the deaths of certain victims among those that Iris discovered had been collected following the Crime Syndicate's attacks. Because of his foreknowledge, Barry knows that these particular killings are the work of a man called Overload, who would go on to kill hundreds. With this chance to relive his past, Barry hopes he can bring these victims to justice - so long as he can find something to pinpoint Overload's location before he can disappear and be lost as he was when Barry first encountered him, twenty years ago. Fortunately, he finds a link quickly: more than one of the victims seems to have horse hair on their persons. Overload has some connection to horses. When Patty catches him working on the case, Barry lies that it's just an old case he's trying to close, and excuses himself, unaware that Patty has activated the GPS tracker in his phone, surreptitiously.

The Flash arrives at a press conference, sure that this is where Overload's major attack will occur - he just has to find the man to stop him. Soon, he spots Overload, standing next to his horse Alastair, and speeds over, punching him in the face, and chastising him for what he is about to do. He recalls how the attack that happened in his past killed 207 people and disabled all electronics within the area, preventing him from using surveillance to identify the killer. This time, he has found Overload - and intends to kill him. However, his promise of death is overheard. Confronted by Patty, he accidentally dislocates her shoulder and is overall revealed for his nature.

The Flash has just been blasted by Overload with a powerful jolt of energy. He recovers quickly, though, warning Overload that he knows all about him. He had never caught him in his past, but he studied the victims enough to build a theory that Overload hyper-charged electronic devices, causing them to explode. He had therefore, designed his new suit to withstand that attack, just in case he ever found him. Now that he's back in his past, he has that opportunity. Unfortunately, the watch that Patty gave him is not protected, and it blows up. Finally, Barry admits to Patty that he's not her Barry. He's from the future, and he thought he could fix all of his past mistakes, but he'd only made things worse. Despite all of her questions, Patty is most curious to know where the real Barry is.

Patty is not ready to accept that this other Barry has really changed, and mourns for the loss of the Barry she loved. To her surprise, though, the fabric of reality tears open, and the present-day Barry returns, coming face to face with his future self, who explains that he doesn't want this life anymore. Confused, Barry looks to Patty for explanation, but they are all distracted by William Selkirk, who just hopped through the rift whilst empowered by the Speed Force.

Unfortunately, Selkirk's speed of thought is so fast that he can out-think both of them, and seeing the potential for collateral damage, Barry decides to take the fight away from the people. Together, the two Flashes speed into a forest with Selkirk close behind, though they both know that being in the same place at the same time could cause an explosion. Unwilling to go on, the Future Flash triggers that explosion and it consumes Selkirk with it.

Barry finds his future self dying in the crater, and hopes to help him. Instead, the dying speedster explains that not everything can be fixed. He had been arrogant to think so, and allowed his quest to become one of vengeance. Before dying, he has one last piece of information to pass on, though. It is a clue to the murder of his mother, Nora: "Thawne".

An adapted version of the Future Flash appears on the CW TV series, The Flash, as the main antagonist of Season 3. In this adaption, he is a time remnant of the series' main protagonist, Barry Allen, who was created by a causal loop that involved the remnant's future self, Savitar, the death of Iris West and being shunned by the original Barry Allen and his team for being a remnant. He is portrayed by starring cast member, Grant Gustin; and he was voiced by Tobin Bell, who also portrayed Jigsaw in the Saw franchise. 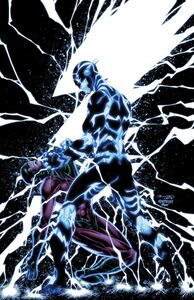 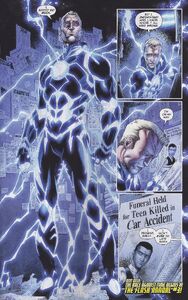 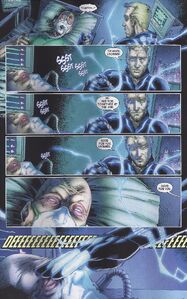 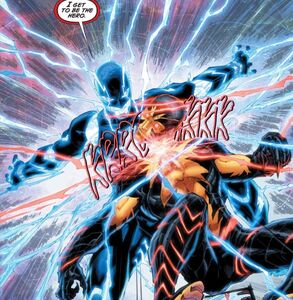 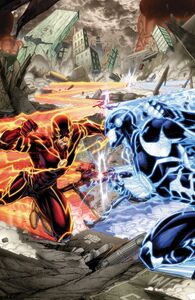 The Flash vs. the Future Flash. 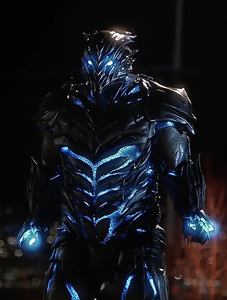 Savitar / Future Flash appearing on The Flash.
Add a photo to this gallery

Retrieved from "https://villains.fandom.com/wiki/Future_Flash?oldid=3536534"
Community content is available under CC-BY-SA unless otherwise noted.