The archenemy of Darwin

Keep Gumball being his BFF forever and replace/kill Darwin (failed).

Fuzzy is a minor antagonist in The Amazing World Of Gumball and the main antagonist of the episode episode "The BFFS". He is Darwin's arch-nemesis and Gumball's former BFF.

Fuzzy first appears when he comes to Gumball and Darwin's house, and Gumball is delighted to see him. When Gumball states to Darwin that Fuzzy was previously his BFF from Minnesota, Darwin grows jealous of Fuzzy.

Darwin becomes even more jealous when Gumball gets more attached to Fuzzy. Gumball eventually gets fed up with Darwin's jealousy and decides to go with Fuzzy to his house. After walking through miles between a desert, a snowy mountain, and through a forest, they finally reach Fuzzy's house.

Unbeknownst to Gumball, Fuzzy reveals his true colors that he was psychotic and extremely jealous of Darwin. He accuses Gumball of replacing him with Darwin, and forces him to wear toddlers clothing. At that moment, Fuzzy gets whacked in the back of a shovel by Darwin, who came to Gumball's rescue. Fuzzy, now revealing his robotic eye and burnt fur, pursues the boys in the woods. When Fuzzy draws near, Gumball and Darwin plunge off the cliff into the river below. The boys try to knock Fuzzy off the cliff with a log, but it backfires. Fuzzy attempts to heave a rock at the boys, only to be startled by Hank, who was Fuzzy's best friend. Hank then takes Fuzzy away as he begs Gumball and Darwin to save him and is never seen again. It is likely presumed that he went back to Minnesota. 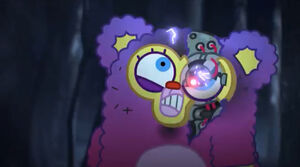 Retrieved from "https://villains.fandom.com/wiki/Fuzzy?oldid=4083235"
Community content is available under CC-BY-SA unless otherwise noted.