Enforcing the tyranny of Project Nexus.

Their name is a distortion of the word "golem" and they are about the size of Mag Hank. They wear armor that covers their entire body and makes them immune to bullets.

In order to kill a G03LM, its helmet must knocked off using melee or unarmed attacks. Once the helmet is off the G03LM can be killed by attacking its exposed head.

They start appearing halfway through Madness: Project Nexus. There are usually one or two per stage but both never appear in the same room together.

The G03LMs will be reappearing in Madness: Project Nexus 2. Concept art for the game shows them wearing armor more akin to medieval knights.

The G03LM Mk2 is an elite version of the G03LM unit that acts as a miniboss in Madness: Project Nexus. It appears in stage [1-G] in the story mode and in waves 37+ of Arena Combat Mode. Its armor is exactly the same as the original G03LMs, but black in coloration with a red trim.

They are killed the same way as a normal G03LM, but it is much harder to do so. The G03LM Mk2 has sturdier and more secure armor than a regular G03LM, making it harder to knock off its helmet. They are also about three times as strong than their Mk1 counterparts and, once unmasked, require more ammunition to be taken down. When its mask is cracked, the G03LM will stumble for a moment, before getting ready to attack again.

A G03LM Mk2 appears at the end of stage [1-G], wielding a mega hammer and minigun. Once it is killed along with any other grunts, the stage ends.

Zombie G03LMs are the zombie variants of regular G03LM units. They are a part of the Zombie Arena Mode of Madness: Project Nexus, first appearing after Wave 9. These G03LMs wear dented-up armor and will sometimes spawn, lacking a protective bulletproof helmet.

Like normal G03LMs, zombie G03LMs must have their helmets, if any, knocked off before taking any damage. However, similar to zombies, these G03LMs cannot use weapons and will usually drop them if held. On the other hand, because of their size, zombie G03LMs cannot steal weapons or ammunition from their foes. Like regular G03LMs, they can only used unarmed attacks to knock over and disarm victims, inflicting direct health damage (although the damage inflicted by Zombie G03LM is notably higher compared to regular G03LM). This also makes them different from other zombies, who drain the victims' TAC-Bars before killing them. 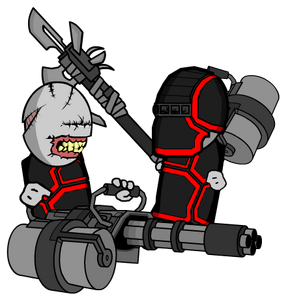 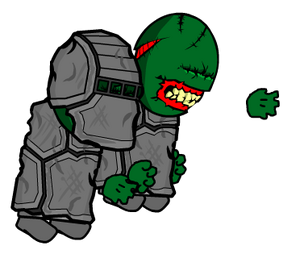