Seize hearts and souls of Earthlings with their music.

Defeat the Master (both succeeded).
Escape Earth (formerly).
Destroy the universe (ongoing).
Reclaim their throne in Hell from Satan (succeeded).

Gwar, often stylized as GWAR, is an American heavy metal band formed in Richmond, Virginia in 1984, composed of and operated by a frequently rotating line-up of musicians, artists and filmmakers collectively known as "Slave Pit Inc".

The band's thematic and visual concept revolves around an elaborate sci-fi mythology which portrays the band members as a gang of barbaric alien warriors with a hedonistic lust for sex, drugs, violence, and heavy metal. Members of GWAR dress in elaborate and grotesque costumes on stage, and bring out other costumed characters (usually famous celebrities and political figures) whom they fight and murder during each song, usually resulting in the audience getting sprayed with copious amounts of fake blood, urine, semen, and other bodily fluids.

The band's origins were originally two projects merged into one- the founder and former lead singer, David Brockie, was originally the vocalist and bassist for a punk rock band named "Death Piggy", and would put on mini-plays with cardboard props to go along with the music. During one of their earlier performances, Brockie got the idea to open up Death Piggy's performance with a fake band named "Gwaaarrrgghhlllgh", depicted as a gang of barbarians from Antarctica who would play nonsense songs, beat each other up, and sacrifice fake animals. After a while, the band began to notice more people in the audience came for Gwaaarrrgghhlllgh but left immediately afterwards. Thus, Death Piggy was phased out and Gwaaarrrgghhlllgh was refined and re-tooled into GWAR, which continues to evolve to this day.

GWAR's story begins at the beginning of time when the Master, a giant planet sized mass of flesh, shat out the entire universe. After viewing his creation, he decided it needed wiping. Thus, the Master created the Scumdogs of the Universe, an army of intergalactic pirates, warriors, and psychos who pledged allegiance to him, GWAR amongst them. Along with the Master's most loyal servant, Techno Destructo, GWAR and the Scumdogs of the Universe waged chaos across the universe, but GWAR invoked the Master's ire by blowing up the wrong planet (Flarv Quarv 7, rather than Flarv Quarv 6 as they were instructed) and when they began craving more power and decided to attempt to overthrow him.

GWAR was immediately defeated by the Master in combat and exiled to the backwards mud-ball planet Earth for eternity. But even in exile, the members of GWAR still managed to enjoy themselves- they invented rock music by stretching dinosaur guts across the grand canyon, killed the dinosaurs, and accidentally created humanity after raping a bunch of gorillas and various other animals. From there, they would go about wrecking human civilizations until the Master found out about their activities on Earth, and so, he froze them in ice and locked them away in a temple in Antarctica.

Thousands of years later in 1984, music mogul Sleazy P. Martini stumbled upon their hidden temple after fleeing from the U.S. for drug trafficking and crashing his helicoptor in the Antarctic. A combination of global warming and sunlight reflecting off his gold chains melted GWAR's icy prison. They attempt to kill Sleazy, but he quickly wins their favor by hooking them on crack and convincing them to let him be their new band manager. Shortly after this, they discovered the band Death Piggy and convinced the band members to join them as their personal slaves and/or butt-boys, and decided to continue this tradition, while at the same time kidnapping and mutating other humans to become their slaves and minions.

They would then go on to become one of the most renowned rock bands ever, and would attempt to either escape, conquer, or destroy the earth multiple times, facing deadly enemies such as Techno Destructo, Jewcifer, Dr. Skulhedface, Cardinal Syn, and many others

GWAR Slaves are members of the group that are involved in various non-musical aspects (though at least four of the slaves have sung in GWAR or GWAR-related projects) of the group such as prop/costume fabrication, writing, illustrating, and more. The slaves are the ones that play GWAR's enemies such as Gor-Gor and Cardinal Syn on stage. They wear costumes, though not nearly as elaborate as the musicians in the band. The longest serving slaves in Gwar are Scott Krahl, Bob Gorman, and Matt Maguire. Mike Bonner and Hunter Jackson were also long-term members but have since left the group.

The lineup of GWAR during the Battle Maximus era (2013). 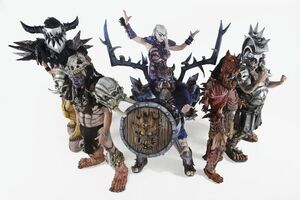 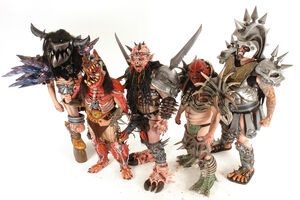 GWAR's lineup for Scumdogs of the Universe (1990), among other albums. From left to right: Bälsäc, JiZMak da Gusha, Oderus Urungus, Flattus Maximus, Beefcake 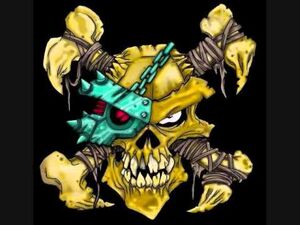 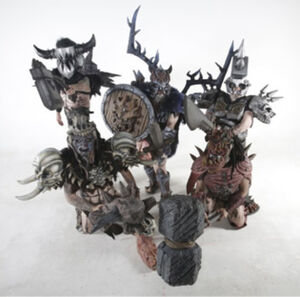