Your Malevolence
Your Maleficence

Khura'in Minister of Justice
Queen of the Kingdom of Khura'in

Ruling Khura'in with an iron fist (succeeded for 23 years, failed in the end)

Execute anyone who defies her (succeeded for 23 years, failed in the end)
Kill Phoenix Wright and Apollo Justice (failed)

Ga'ran Sigatar Khura'in is the main antagonist of Phoenix Wright: Ace Attorney - Spirit of Justice. She has been the queen of Khura'in for 23 years, ever since her older sister, Amara, was assassinated. In the aftermath, Ga'ran ascended to the throne and married Inga Karkhuul Khura'in. Over the next few years, she phased in the Defense Culpability Act, which declared that attorneys would receive the same sentence as their clients. She now has absolute power within the country.

She was also responsible for the murder of Apollo Justice's father, Jove Justice.

Prior to Amara Sigatar Khura'in's assassination attempt, Ga'ran served as a prosecutor and the Khura'in Minister of Justice while her sister, Amara, ruled as Queen of Khura'in. This caused her to develop deep jealousy towards her sister, culminating into a plan to replace her and discredit all defense attorneys, effectively giving her and her loyal Ministry of Justice absolute power over Khura'in's legal system.

She set her plan into motion, starting a fire at Amara's residence during Jove Justice's performance. To the public, this seemingly killed Amara, allowing Ga'ran to take her place as queen. However, the truth of the matter was that Amara survived, and Ga'ran blackmailed Amara into staying hidden and helping her when needed, using Amara's daughter, Rayfa's, safety. In the process, defense attorney and Amara's husband, Dhurke Sahdmadhi, was accused of causing the fire. Ga'ran prosecuted the case, causing an unjust guilty verdict, leading Dhurke, his son, Nahyuta Sahdmadhi, and foster son, Apollo Justice, to go into hiding, and eventually causing a widespread discrediting of defense attorneys, leading to the occupation to become dangerous and borderline illegal via the Defense Culpability Act.

When Nahyuta was forced to become a prosecutor rather than a lawyer as he had initially desired, she recognized him to be a threat and decided to force him into compliance by threatening to expose Rayfa's true parentage, forcing her into the same status as a pariah that he had suffered for being Dhurke's child, making him become the embodiment of the draconian legal system she forged. Unlike Inga, she never truly developed a soft spot for Rayfa, only seeing her despised sister's image in her niece, and her neglectful and abusive behaviour ended up giving Rayfa a high-strung and overly perfectionist attitude that would torment her throughout her life.

However, Ga'ran knew that one thing could end her long reign over Khura'in: the fact that she had no spiritual powers. For years, the queens of Khura'in had always been spirit mediums with enough spiritual power to channel the souls of the dead. Amara had plenty, and Ga'ran had used her for that. However, she knew that she would eventually need her own so that her cover would not be blown. Thus, she sought out the Founder's Orb, a mystical object that would grant whoever solved its secrets more spiritual power than he or she could ever want or need. However, Dhurke and Apollo found the Founder's Orb first and managed to keep it from her upon returning to Khura'in, even though this resulted in Apollo and fellow attorney Athena Cykes being hunted by Khura'inese soldiers and members of the Royal Guard in Ga'ran's attempt to obtain the orb for herself. Her efforts were in vain, like Apollo, with help from Dhurke's right-hand man, Datz Are'bal, was able to keep the Founder's Orb away from her long enough to use it as the trump card in exposing her crimes and her false position of royalty in court.

After being accused and then challenged by Apollo to channel the Holy Mother, the guards in the courtroom are blown away while Ga'ran reels back in shock. She then tries to perform the Divination Séance dance to channel the Holy Mother while the guards encourage her, only for it to fail. Her guards realize that she is both a murderess and, according to law, a false queen since she has no spiritual powers of her own. As they aim their rifles at her, she pleads with them to give her a second chance and attempts the dance again, only for it to backfire, knock her unconscious, and cause her to fall backwards into the Pool of Souls. She then lies on the pool, bemused.

She is then arrested for her crimes off-screen, and it is revealed that her exposure as the villainess she was caused her to have a mental break, as she had started believing that she was the Holy Mother.

In her duties as queen, Ga'ran seems to dress with the intention of seeming regal and harmless. She wears a heavy white robe with red-and-gold trim, along with a golden ministerial hat and her hair styled in extremely tight buns.

As with her kindly persona, this is a mask. Underneath her robes, she wears a customized prosecutor's uniform: a far more revealing, skintight purple dress and a necklace of Magatamas, with a bindi head jewel, large hair clips, and mascara to give herself a seemingly perpetual sneer. When removing her royal robes to reveal her dress, she will also undo her buns, allowing her hair to fan out into stiff coils and bangs that resembled a spider's legs and mandibles. She grows her nails long and painted red, and carries a large red-and-purple fan (which she used to blow at the defense when making her claims), as well as carried around a book about Khura'inese law that she would slam on the desk as a prosecutor (and to which she would make edits when issuing her decrees). 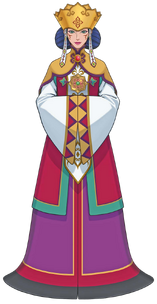 In her royal garments. 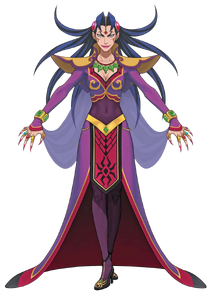 Ga'ran as a prosecutor.
Add a photo to this gallery