Gabriel, more commonly known as Gabe is a character in the DC TV Series Gotham and the henchman of Oswald Cobblepot, having formerly acted in the similar role for Frankie Carbone until betraying him as Oswald paid him more money.

He was portrayed by Alex Corrado.

He had worked for crime boss Salvatore Maroni for sometime, and was the henchman for Maroni's second-in-command Frankie Carbone. Gabe was bought out by Oswald Cobblepot (who had managed to slither his way into the Maroni crime family as a snitch for Carmine Falcone) and held Frankie whilst Oswald stabbed him to death.

When James Gordon was trying to uncover Arnold Flass for his conspiracy in drug dealing and murdering an innocent witness, he turned to Oswald for help to expose him. Although asked not to hurt anyone, Oswald went against Jim's wishes and sent Gabe to interrogate Flass' associate Derek Delaware and nearly kills the man's wife when questioning him about Flass' activities as he dunks her in a bathtub.

After Maroni's death, Falcone's retirement and Fish Mooney's presumed death at Oswald's hands, Oswald becomes the new "King of Gotham" and Gabe continues working for him. When Harvey Bullock confronts Oswald to leave Jim alone, he has a gun pointed at him by Gabe, however Oswald chooses to let him go.

When Oswald planned an attack my new mayoral candidate Theo Galavan for killing his mother, Gabe was seen preparing for the attack. What happened to him during the shootout is unknown, however Oswald ended up being injured and going on the run.

Gabe turns up at Edward Nygma's apartment (where Oswald is currently hiding out) to reveal to him that Theo has been released from custody after being on trial for kidnapping former mayor Aubrey James, which angers Oswald.

It is revealed that Gabe got someone to follow Theo and along with Oswald headed to his last known location - a warehouse. There Jim Gordon is being beaten by two police officers working for Theo, and Gabe shoots the pair. Oswald then begins hitting Jim, demanding where Theo has gone to.

Gabe assists Penguin and his gang, alongside an allied Jim Gordon, Alfred Pennyworth and Harvey Bullock to attack Theo Galavan's headquarters and prevent the Order of St.

Dumas from sacrificing Bruce Wayne and to also capture Theo himself. Jim faces off with Theo in his office (after he is abandoned by his sister Tabitha and niece Silver St. Cloud) and is in the process of arresting him, but is interrupted by the arrival of Captain Nathanial Barnes and another cop. But Penguin, Gabe and another gang sneak up and knock the pair out. Penguin bargains with Jim that if he brings Theo into custody he will just be let off again. Penguin and Jim later take Theo to the docks to execute him, although Gabe isn't present.

Gabe's activity during Oswald's incarceration at Arkham Asylum, release and absence from the criminal underworld is unknown, however once Oswald took back his place as crime lord and later became mayor of Gotham City, Gabe was shown to still be working for him and loyal. Oswald hired Gabe to kill a woman named Isabella, who was the girlfriend of Oswald's chief of staff Edward Nygma, whom Oswald himself developed a crush for and felt that Isabella was intruding and taking him away. Gabe cut the breaks on Isabella's car, which later led to her running into the path of an ongoing train.

After Oswald has been shot by Nygma, Gabe is among those who believe him to be dead. However, Oswald is saved by Ivy Pepper. Planning to exact revenge on Nygma, Oswald sends Ivy to find Gabe because he needs Gabe to build an army. Gabe indeed turns up with Ivy and states to be delighted that his boss is still alive. He immediately makes some calls to round up some of his men. When Ivy tells Oswald that she does not trust Gabe, Oswald insults her and Ivy runs away. However, moments later Gabe actually betrays Oswald and knocks him unconscious.

When Oswald regains consciousness, Gabe is visited by the men he called. He reveals that he and his friends will not kill Oswald but sell his death to the highest bidder. Before they can do so, however, Ivy saves Oswald by using her mind-control perfume on one of Gabe's men. She then orders the goon to shoot all others, which the man does.

However, when the gun is aimed at Gabe, Oswald tells Ivy to stop when Gabe pleads, claiming that he betrayed Oswald because Oswald never acknowledged him despite Gabe being there for Oswald when no one else was. Oswald reconsiders and asks whether Gabe will swear allegiance to him, to which Gabe falls onto his knees and promises to do so.

However, Ivy uses her perfume on Gabe and forces him to speak his mind. Gabe claims that he will never follow Oswald and that they everyone only ever followed Oswald out of fear. When Gabe states that everyone saw Oswald for what he really was, a freak, the outraged Oswald beats him to death with a gardening tool. 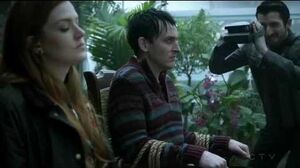 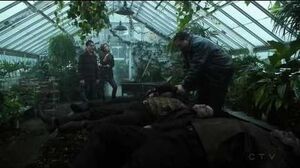 Retrieved from "https://villains.fandom.com/wiki/Gabe_(Gotham)?oldid=4166304"
Community content is available under CC-BY-SA unless otherwise noted.