Being with Nigel.
Eating flies.

Have a relationship with Nigel (succeeded).

Gabi is a tree frog and the secondary antagonist of Blue Sky's 9th animated feature film Rio 2. She was Nigel's minion and was in love with him.

She was voiced by Kristin Chenoweth, who also played Maleficent in Descendants.

Gabi is a pink tree frog with blackish-purple spots. She has turquoise eyes and blue irises with long pieces of skin above her eyes that give the appearance of eyelashes.

Gabi is madly in love with Nigel and will do anything for him. She supports Nigel no matter what, doing his evil bidding without question and trying to bond with him by doing whatever villainous things she has to.

Despite her small size, her sly, bitter and villainous heart is almost as large as Nigel's. She also has a somewhat unpleasant and murderous side; she attempted to kill Blu with her poison while he was asleep and only stopped when Nigel halted her.

She also often does "evil stares" throughout the film, such as when she was sneaking up on Blu. This was also shown when Nigel was slingshotted by Charlie towards a blue macaw (which they had mistaken for Blu); she yelled after Nigel with an evil look in her eyes "Go get 'em, tiger.".

Nothing is known about Gabi before the events of Rio 2. However, it is possible that she has been trapped in a poisonous bottle for a few years.

Gabi is first trapped in a poisonous glass bottle and is later freed by Nigel to be her assistant. Later on, Gabi sings her romantic song, "Poisonous Love" while going to the Amazon by dreaming about a "honeymoon on Rio". Later on, she and Nigel are present singing the unoriginal song, "I Will Survive". Later on, Gabi and Nigel try to get rid of Blu, Jewel, and the other blue macaws during deforestation. Seeing Blu and Nigel tangled in vines, Gabi sees her chance and uses Charlie to aim a quill covered in her slime at Blu. Gabi fires the quill, but it accidentally pricks Nigel instead, much to her horror, and she decides to die with him.

However, their dramatic death scene is subverted when one of the daughters of Blu and Jewel (Bia) knows that the shot which knocked out Nigel is not poisonous. Later, Gabi and Nigel are captured and sent back to Rio by humans, much to Gabi's delight and Nigel's horror and dismay. 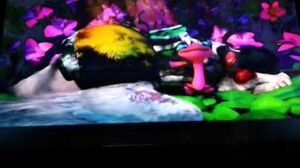