Take control of the Elf Kingdom

Gabilan is a minor antagonists in the Amulet series. He was hired by the Elf King as a mercenary in place of Luger.

A skilled mercenary, his only goal seems to be acquiring a desired amount of pay per contract, as he appears distraught after being told by the Elf King that he will only receive half of the payment until his duty has been fulfilled.  Despite this, he is headstrong and willingly duels against stonekeepers, including Emily and Trellis.

In Firelight, Gabilan's early life was revealed. In his youth, Gabilan and his family live on a farm and bred Stormbirds for the Elf Army. A Stonekeeper then lost control of his Amulet and destroyed the farm, killing Gabilan's family and their Stormbirds. From that point on, Gabilan developed a strong hatred towards the Stonekeepers.

Somewhere along the line, Gabilan had come across Luger, who had been defeated by Emily, Navin, and the gang at Demon's Head Mountain. He used his memory-erasing gun to wipe out Luger's memory.

The Elf king hires Gabilan as an assassin to hunt down Emily Hayes and her companions, along with the Elf King's son, Trellis, who has betrayed him again. Though he questions the Elf King's motives for wanting to kill his own son, the only thing he seems to care for is his payment. When he is told he will only be given half until his mission has been completed, he is upset. Gabilan questioned the elf servant, Logi, if he appreciated working for the Elf King, to which Logi explained that he is simply acting out of survival. Gabilan proclaimed that Logi would be given a better wage "when [he] is king", right before flying off on his Stormbird.

Gabilan managed to locate Emily by interrogating two elf soldiers at a bar by threatening to erase their memory with his Memory Extractor. He utilized the device on one of the soldiers after they refused to tell him and then viewed the information through a screen, where two cats appeared. Gabilan then questioned the bartender on who the cats were. The bartender told Gabilan that the two cats on-screen were Enzo and Rice, the crew of an airship called the Luna Moth.

When Gabilan asked the bartender if he knew where they were heading, he explains that Enzo and Rico would be taking Emily and her friends to the lost city of Cielis, which the elves had destroyed in an early war. Gabilan voiced his opinion that Cielis was destroyed, but the bartender stated that most people (including Enzo and Rico) believed Cielis survived the war, and relocated to the skies, as a flying city. As Gabilan knows that Cielis was a city of Stonekeepers, he concludes that Emily and her companions are gathering reinforcements. Gabilan gives the bartender a coin for his troubles, and walked towards the exit. As he did, the other guard asked Gabilan whose side he was on and why he'd do such terrible things to his own people, despite being an elf. Gabilan told the guard "I'm the only one of my kind there is." and left the bar.

On his Stormbird, Gabilan pursued the Luna Moth much later and eventually gained snuck onboard when the airship stopped at a refueling station. When they reached a floating island with a beacon temple near Cielis, Gabilan revealed himself and threatened to kill Emily's mother. Emily and Trellis fought against him in the floating temple, where he eventually fell and landed safely onto his Stormbird.

Gabilan questioning the Elf King's motives for wanting to kill his son. 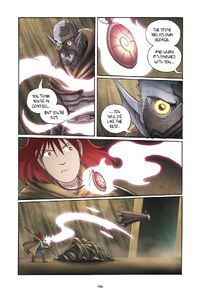 Gabilan warns Emily about the Stone's power.
Add a photo to this gallery

Retrieved from "https://villains.fandom.com/wiki/Gabilan?oldid=3773374"
Community content is available under CC-BY-SA unless otherwise noted.