The Snob (novelization only)

Musing at the theological society

Release Hell on Earth to make humanity worthy of Heaven

Gabriel was the main antagonist of 2005 American-German occult detective action film, Constantine. He was a supernatural being - half human, half angel - who despised humanity and plotted to set Mammon free from Hell in order to unleash demons on Earth.

He was portrayed by Tilda Swinton, who also played Jadis the White Witch in Chronicles of Narnia: The Lion, the Witch, and the Wardrobe, Karen Crowder in Michael Clayton, Minister Mason in Snowpiercer, Lucy and Nancy Mirando in Okja, and Madame Blanc and Helena Markos in the 2018 remake of Suspiria.

Gabriel first appeared in the film when freelance exorcist John Constantine visited him at a Theological Society. After he attempted suicide as teenager as a result of being driven to the brink of madness by his psychic visions, Constantine was damned to Hell, and spent the last few decades of his life attempting to buy his way into Heaven by keeping half-breed demons from wreaking havoc on Earth. However, Constantine was diagnosed with lung cancer, and knew it wou8ldn't be long before he faced his final judgement, so he approached Gabriel in an attempt to earn a reprieve. Unfortunately, Gabriel refused to help on the grounds that Constantine's good deeds over the years were motivated by selfish fear, and could never earn him entry to Heaven.

Despite his despair, Constantine soon found himself embroiled in an ongoing suicide investigation on behalf of Detective Angela Dodson: her identical twin Isabel - a long-term psychiatric patient at Ravenscar hospital - committed suicide, and Angela believed that she was murdered. Though that belief turned out to be unfounded, as Isabel's soul was damned to Hell for suicide, it's revealed that she only did so in order to avoid being possessed. Constantine's friends, Hennessy and Beeman eventually learned that the attempted possessor was none other than Lucifer's son, Mammon, who planned to claim Earth as his own kingdom - but to do so, Mammon required a powerful psychic and assistance from God. Isabel was one such psychic, and Angela possessed similar abilities, though she repressed them in order to avoid being institutionalized.

Soon after, both Hennessy and Beeman were murdered by Balthazar, a half-breed demon; with Angela's help, Constantine tracked Balthazar down and interrogated him at length, and he eventually confessed that Mammon had obtained the Spear of Destiny, which could be used as the assistance from God. However, shortly after they left, the mortally-wounded Balthazar was seen communicating with an unseen figure, who claimed to have arranged everything so that Angela could take her sister's place, and offered to continue the mission if the figure would heal him of the wounds that Constantine had inflicted. Instead, the figure decided that Balthazar had outlived his usefulness, and disintegrated him instantly.

Shortly afterward, Angela was abducted by an invisible entity and was brought to Ravenscar - where she was roughly deposited in the hydrotherapy pool where Isabel's body was found and left to wait for Mammon. With assistance from his driver and apprentice, Chas, Constantine was able to get to the hospital and kill most of the demons who guarded the hydrotherapy room; however, Angela was already possessed, and when the two exorcists attempted to force Mammon out of her body, Chas was beaten to death by the same invisible entity who killed Balthazar and kidnapped Angela.

Using mystic sigils tattooed on his arms, Constantine then forced the entity to reveal itself - only to find that it was none other than Gabriel. After he was despaired at the quality of humans admitted into Heaven through God’s favoritism, Gabriel believed that humanity could only reach its true potential in the depths of unimaginable torment, and that bringing Hell to Earth would enable any survivors to become worthy of God’s love through suffering, repentance and faith. Gabriel then flung Constantine from the room, and with nobody able to stop him, moved to physically release Mammon from Angela's body with the Spear of Destiny.

However, Constantine had one last option left to him: knowing that he was the one soul that Satan himself would collect in person, he then slit his wrists with a piece of broken glass. Sure enough, Satan then emerged from Hell and, wanting to savor the moment, stopped time just as Gabriel moved to stab Angela with the Spear of Destiny. Satan and Constantine - who called Satan "Lu" - then discussed the situation.

Upon discovering Mammon's plan to overthrow him, Satan then burst into the hydrotherapy room, dragged Angela out of Gabriel's arms, and then restarted time. Panicked, Gabriel attempted to smite Satan "in His honor," but God took away the angel's power as punishment for his betrayal, which then allowed Satan to incinerate Gabriel's wings and sent him tumbling into the pool, before he promptly sent Mammon back to Hell. Meanwhile, Constantine asked for one last favor of Satan in exchange for informing him of the incoming coup: Isabel's allowance into Heaven. After he fulfilled that wish, Satan then attempted to take Constantine's soul to Hell, only to discover that his sacrifices made the exorcist worthy of Heaven; enraged, Satan then removed Constantine's cancer, resurrected him, and claimed that keeping Constantine on Earth would ensure that he would eventually prove that he belonged in Hell.

After he was reduced to an ordinary human, Gabriel then tried to encourage Constantine to kill him, and even went as far as to put his shotgun back into his hands and insisted that he pull the trigger. After he recognized an attempt to make him sin all over again, Constantine then punched Gabriel in his face, which gave the fallen angel his first taste of serious pain. Angela and Constantine then left the hospital, and ignored Gabriel as he shouted after them.

In a post-credits scene, it was revealed that Chas took Gabriel's place as the Angel of Revelation.

Unlike his depiction in the Hellblazer Comic series on which the film was based, the film's version of Gabriel was not a true angel: at present, an ongoing wager between God and Satan barred pure angels and pure demons from Earth. That version was a half-breed - a human who was rewarded for virtuousness in life by being empowered with angelic abilities. However, Gabriel's self-righteousness was consistent with his comic book portrayal, as was his disgust for humanity. His delusional and misanthropic nature made Gabriel strongly believe to the point of fanaticism that people were unworthy of God's love. He believed by bringing Hell on Earth would purify humanity of their sins and make them worthy of Heaven. However, he completely ignored the fact that in practice, it would create a nightmarish dystopia of eternal suffering for much people, since it was likely they would take their own lives in order to escape the atrocious pain and horror, and therefore damn theirs souls to afterlife-Hell. Gabriel was also very snobbish and condescending, and displayed that attitude every time that he met with John Constantoine. His hate of John was so strong that when he lost God's favor and became mortal, Gabriel pressed John to pull the trigger to kill him in order to damn his soul again, only for Constantine to punch him in the face and tell him to get used to pain. 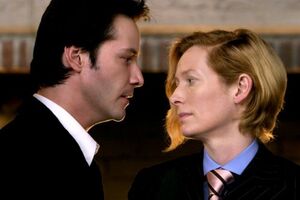 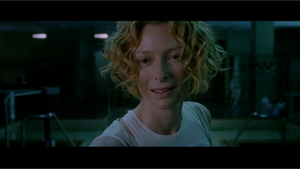 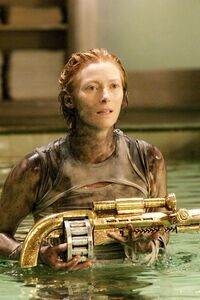