Emperor of the Dark Realm

Assault the Ocean Turtle to obtain the Soul Translator technology

Gabriel Miller, also known as Subtilizer (in Gun Gale Online) and Emperor Vector (in Alicization), is the main antagonist in the second half of Sword Art Online: Alicization, known as the War of the Underworld Arc. He is also the final boss of the series' original web series version.

Gabriel is the Chief Technological Officer of "Glowgen Defense Systems" and son of the founder and former CTO. During the events of the Alicization Arc, he leads a 12-men team of operators, at the request of the National Security Agency, on an assault of the Ocean Turtle.

He is voiced by Akira Ishida in the Japanese version of the anime, and by Greg Chun in the English version.

Gabriel is not only charismatic, manipulative, and wickedly intelligent, even despite his insanity, but also is simultaneously utterly bloodthirsty and utterly devoid of anything remotely resembling empathy. He murdered his fiancée when he was a child to see what the nature of the soul was like, experimented on animals for that same reason also during his youth, and treats his followers either as tools or his own playthings.

Gabriel constantly views everyone else as inferior to him whilst discarding them after being done using them for his own purposes. He also sees Integrity Knights as nothing but artificial intellegence, as he mocked an AI for sacrificing his own life, and then Kirito, Alice, Asuna and Shino for their supposed arrogance.

Gabriel Miller was born in the Pacific Palisades district in the suburbs of Los Angeles, California in March 1998. His father had a hobby of collecting insect specimens. The young Gabriel would seclude himself in the room to observe the multi-colored insects with a magnifying glass.

During such observations, Gabriel began thinking about what powered those creatures. His father then showed him a video about mating praying mantises, where the female would devour the head of her partner during the mating. However, the insect would still continue to move despite no longer having a head. Since then he began thinking where was the soul of the insect housed in.

To find out, Gabriel conduced numerous experiments on insects by demolishing various parts of their bodies in secret. By the outcome of those cruel experiments, he concluded that the insect's soul was spread throughout its body. Gabriel desired to see or even capture this soul. However, no matter how much he experimented, he never fulfill his goal.

Gabriel then began thinking about human souls. As humans could not live on without their heads, he concluded that their soul resided in the brain. He continued his thoughts about the human soul while analyzing his childhood friend, Alicia Klingerman.

Murder of his Friend

Gabriel envisioned marrying Alicia one day to gain a glimpse at her soul. However, because of the Global Financial Crisis of 2008, Alicia's family fell from grace and earned a heavy debt. Alicia and her family were going to move to their kin in Kansas City. However, the 10-year-old Gabriel decided to kill her in case her soul lost its brilliance.

On the day Alicia bid her farewells at school, Gabriel invited her to the forest behind his home where his secret laboratory was hidden. There, when Gabriel and Alicia hugged, he took out the needle, which his father had used on his insects, to pierce through Alicia's left ear while holding her right ear, killing her.

As Alicia died, Gabriel saw a small glittering cloud passing out of her forehead and thought that what he was seeing was her soul. After that, he became more and more obsessed with human souls.

For the next years, Gabriel showed great interest in the FullDive technology created in Japan in his pursuit of souls. He even began studying Japanese and fought against Japanese players in Gun Gale Online as Subtilizer.

Soon, he became a legendary figure amongst GGO players after winning the 1st Bullet of Bullets tournament with just a knife and a handgun. Later, his fame cemented after the 4th BoB tournament, which he won its champion without bringing any weapons of his own, merely using the «Army Combative» skill to grapple to his opponent, steal the player's weapon and use it to kill his target. He was somehow able to predict the moves of his targets to ambush them at extremely close range. After that, he would kill them before they were even able to use their weapons against him.

One day, Gabriel's company was approached by the National Security Agency and they were requested to participate in an operation to assault the Ocean Turtle to obtain the Soul Translator technology secretly developed there. Hearing about the technology to interface with the human soul and that it had already succeeded in duplicating a human's soul, Gabriel volunteered to lead the operation himself. 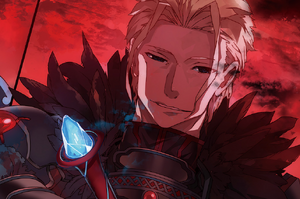 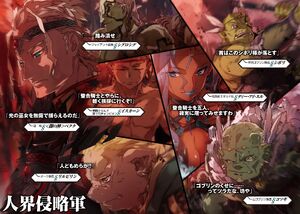 Vector and his intruder army 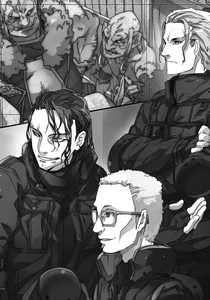 Vector with PoH and Critter watching creatures from the Dark Realms 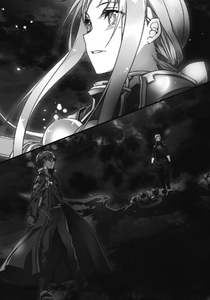 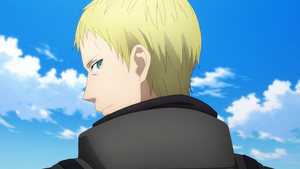 Gabriel Miller in the anime 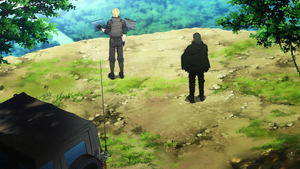 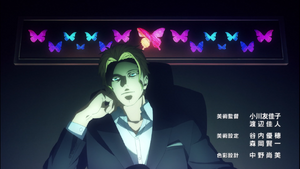 Gabriel Miller in the Resolution opening. 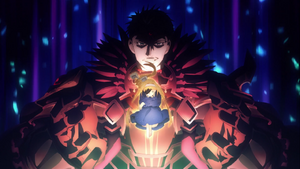 Emperor Vector in the Resolution opening.
Add a photo to this gallery

Retrieved from "https://villains.fandom.com/wiki/Gabriel_Miller?oldid=3632103"
Community content is available under CC-BY-SA unless otherwise noted.