Criticizing those alongside him.

Gabriel Santos is a celebrity super chef who travels the world with a live-streamed food-and-lifestyle program. He was infamous for his demanding and capricious demeanour, and he had driven staff to mental breakdowns many times in the past.

A native of Buenos Aires, Santos was a highly skilled chef and has built himself into a major media celebrity. This cult of personality ensured that no matter how poorly he treated the staff on his team, he could successfully get away with it.

To date, he had committed several physical attacks, beatings and at least two separate (and live-streamed) assaults with a bladed meat tenderizer. Those abusive acts have only added to his status as the ultimate bad boy chef.

Eventually, Santos had evaded any consequences to his career and joined the Sanguine fashion show as its chef of luxury catering for Novikov and Margolis, whilst escorted by social media producers and his assistants.

The client who ordered Santos assassination was a former investor of his production company, who hired the ICA and Agent 47 to kill Santos in the fashion show.

Santos is an unreasonable and wrathful person, who is both aggressive, arrogant and foul-mouthed, even swearing in public and bullying his assistants as he was introducing his catering to the media and press. He tears into everything he approaches and makes many personal attacks on everyone he encounters. 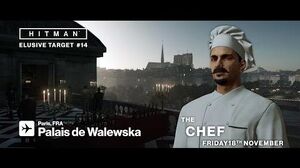