Kill his "father" Peter Parker/Spider-Man and avenging his mother's death. (failed/gave up after finding out the "truth")

Gabriel Stacy is one of the most malevolent villains in Spider-Man comics. He is the cloned "son" of Norman Osborn and Gwen Stacy and the twin brother of Sarah Stacy. He serves as one of two main antagonists of the Kindred Saga (alongside Sarah Stacy) of the Amazing Spider-Man comic series.

Gabriel and his sister, Sarah, were the result of a genetic experiment created by Mendel Stromm, using the genetic DNA of Norman Osborn and Gwen Stacy. Mendel was hired by Harry Osborn to set up the experiment, as he was plotting to torture both his father, Norman and his best friend, Peter.

To ensure his plan worked, Harry hired Mysterio to brainwash and manipulate with Norman and Mary Jane's memories into thinking Norman had fathered twins with Gwen Stacy to whom she gave birth while in France and thus were led to believe Gwen was cheating on Peter. Harry then created an AI in the form of himself and his father, and had it raise both Gabriel and his sister, manipulating them as part of Harry's plans.

Due to Norman's enhanced blood, the twins aged about 2-3 times faster than normal and became adults within the span of a few years. The twins were then lied to by either Norman or the AI, saying that Peter was their real father and was responsible for their mother's death. Once they were old enough, the twins set out to kill Spider-Man. Peter Parker received an unsent letter written years ago by Gwen Stacy. He could tell that there were faint traces of writing on the other side, so he had tests performed on it by a forensics lab. The tests revealed text stating that Gwen had been pregnant and had twins. He collected DNA from Gwen's grave and proved that the twins, Sarah and Gabriel were her children. Mary Jane Watson then revealed that she had known for years that the twin's father was Norman Osborn.

Attempting to set them straight (and stop their assassination attempts), Spider-Man met Sarah and Gabriel at the place of their mother's death on the Brooklyn Bridge, to tell them that their father had been manipulating them. Sarah began to believe Spider-Man, but Gabriel remained convinced that Spider-Man was their father, and became outraged that Spider-Man had abandoned them and was attempting to pawn them off on Norman. Gabriel attacked, but Spider-Man refused to fight back, not wanting to hurt him. Police became involved, shooting at them and wounding Sarah. Gabriel escaped and found a base Norman had told them about. There, he discovered that Peter had been telling the truth and injected himself with the Goblin Formula and donned a gray version of the Green Goblin costume, becoming the "Gray Goblin" in an attempt to gain the strength to finally kill Spider-Man.

Attacking at the hospital where Spider-Man was saving Sarah's life, the Grey Goblin was ready to kill Spider-Man in his weakened state when his twin sister intervened, shooting at her twin brother, causing the Goblin Glider to blow up as well as Gabriel to contract amnesia.

Sarah secretly took him home to Paris where she cared for him. Unfortunately, a drug dealer from their youth came after the both of them for the theft of $1.5 million dollars of drugs Gabriel stole from him. The pressure became too great caring for him and fending off the dealer, and Sarah attempted suicide. While she was in the hospital, he escaped the Osborn estate in a crazed state, and Sarah eventually joined Interpol in an effort to find Gabriel.

Years later, Gabriel Stacy resurfaced and shot his half-brother Harry Osborn in a fit of jealousy over Norman's spoils. Leaving him for dead, Gabriel stole the American Son Armor and fled. Continuing to suffer from the split personality disorder he'd developed as a result of injecting himself with a second dose of the Goblin Serum, Gabriel now committed crimes as himself while his 'American Son' persona undid the damage. The American son persona identified itself as the part of Gabriel that recognized that what he was doing was wrong. Recovering from the injury, Harry was informed by his father that Gabriel was, in fact, his brother.

Gabriel's escapades as both his criminal self and his American Son alter ego continued, often being thwarted by Spider-Man. After kidnapping reporter Norah Winters, Gabriel made another attempt on Harry's life, luring Harry to a vacant warehouse. Harry began to fight Gabriel while attempting to convince him that their father was nothing but evil. Gabriel ignored him and continued to fight his brother, only for Harry to deactivate the American Son armor via remote. Essentially powerless, Gabriel and Harry became trapped in the ensuing fire resulting from the fight, until they were saved by Spider-Man.

Gabriel was taken to a psychiatric hospital to receive treatment for his split personality disorder and criminal past. While there, he received a package containing the American Son helmet and a note from Norman saying that Norman loved and missed him.

Gabriel was born with inherited abilities from his father Norman, including super strength, reflexes, healing, and endurance as well as accelerated aging. He later injected himself with a 'second dose' of the Goblin Formula, and thus increased his existing abilities as well as attained new ones: 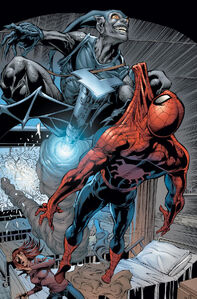 Gabriel as the Grey Goblin. 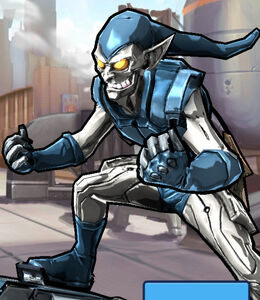 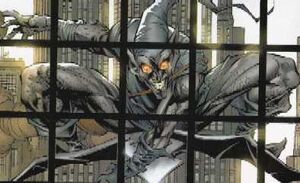 Grey Goblin about to crash through a window. 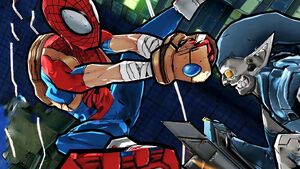 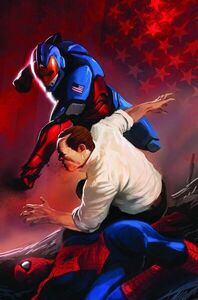 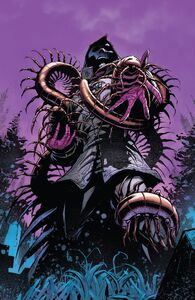 Gabriel as the Kindred.