The Boss (by his subordinates)

Captain of the Marine Corps (formerly)

Abiding and mourning over his tragedy.

Get revenge on Elias Walker (both succeeded).
Aid the Federation in their plans to occupy the United States of America (failed).
Eradicate all members of the Ghosts.
Brainwash Logan Walker into turning against the Ghosts (both ongoing).

Prior to the ODIN strikes, he was the leader of the Ghosts until he and his team were sent to assassinate General Diego Almagro in Caracas and he was left behind due to an unfortunate event. 12 years later, he is the commander of the Federation Armed Forces stationed in the United States while seeking vengeance on his former comrades for abandoning him.

He is also the arch-nemesis of Logan, Hesh and Elias Walker, the latter whom Rorke personally killed for reluctantly leaving him to save the rest of the Ghost team.

He was voiced by Kevin Gage, who also played Waingro in Heat and the titular character in the 2005 film Chaos.

Gabriel Rorke was born in 1974 and once a proud soldier of the United States Armed Forces who fought off hundreds of Middle Eastern soldiers during the Tel Aviv War in an alternate 21st century of the year 2005. Afterwards, Rorke was cleared for duty to lead a new counter stealth unit called Task Force: STALKER, unofficially known as the Ghosts.

In 2015, Rorke convinced the U.S. government to send in the Ghosts to assassinate General Almagro who had been ordering the execution or incarceration of all American citizens in South America and soon the Ghosts were deployed to Caracas, Venezuela to kill Almagro. Upon landing, Rorke and his team had continued to push forward, despite over half of the U.S. forces being decimated, he managed to get Almagro and Elias killed him with a pistol, but he was forced to drop Rorke due to the fact that he couldn't pull him up and dropped him into the flooded streets of Caracas.

After the operation, the Federation found Rorke and sent him to an unknown jungle prison somewhere in South America. The Federation used an ancient torture technique from an Amazon tribe to break him that involving feeding poisonous food to break his body and slowly used unknown methods to break his mind and soul until he was completely brainwashed and pledged full support to the Federation. In one of his files, he expressed his anti-American views and hostility towards the United States when a photo of him during his early career in the U.S. Marine Corps is shown.

Involvement with the Federation

12 years later, Rorke can be seen leading the Federation forces during their invasion of the United States as one of their commanding officers and he has captured, tortured and killed Alex V. "Ajax" Johnson, one of his former teammates from 12 years ago. After the Ghosts return to their Santa Monica base, Rorke is leading a massive invasion of the city and has been known as the Ghost killer for his expert skills in killing Ghost soldiers who are intensely well trained, armed and feared.

On June 15, 2027, during Federation Day, a national holiday in Latin America, Keegan, Hesh, and Logan snuck into Caracas and planned to capture their target: Victor H. Ramos, one of Rorke's associates, in order to obtain information on his location since he travels to different locations every 12 hours to avoid capture and soon Rorke was found and captured at the floating industrial complex in the Gulf of Mexico, only to be rescued hours later by Federation forces stationed in the Yucatan Peninsula and fled the scene. At one point, Federation troops capture Elias, Hesh, Merrick and Logan at their safe house in Las Vegas and after intense interrogation, Rorke pulls out his pistol and shoots Elias in the head as the other three could only watch helplessly.

Later on in the campaign, the "LOKI" Space Station made by the Federation as their own version to ODIN had been preparing to launch a strike on the remaining U.S. major cities as the remnant U.S. military forces launched a massive counter-attack in Chile and the U.S. Air Force astronauts took over LOKI. With the station under their control, they began to use it to destroy the Federation Third Fleet and the ground forces as a major turning point in the war.

During the offensive, Hesh and Logan board the supply train that Rorke is on, intent on killing him to avenge their father's death. When they are overpowered by Rorke, Hesh orders Merrick to attack the train with them still on it by saying the word "Checkmate". This causes the train to crash into the water. While Hesh restrains Rorke, Logan manages to shoot him in the chest as the train floods. Hesh and Logan manage to make it to the surface, leaving Rorke in the water to drown, and report to Merrick that Rorke is dead.

However, as Hesh and Logan wait for the rescue, Rorke appears in front of Logan, alive. He kicks Logan in the face, and as he attempts to stab Rorke, Rorke easily overpowers him and deflects the knife away and breaks his arm. Rorke then kicks Hesh away and knock him out. He shows his anger at Logan for ruining his plans, before showing his admiration for Logan's determination and spirit and vows to continue his mission to kill the Ghosts. He plans to take him to the Federation and tries to brainwash him like Rorke to kill the Ghosts. Logan was then captured and dragged away by Rorke as Hesh was heavily injured and unable to do anything to stop him. In the post-credits scene, Logan was seen held inside a hole within the Amazon, almost certainly about to be tortured the same way Rorke was all those years ago.

Rorke appeared in the comics storyline of Call of Duty: Mobile as one of its main antagonists. While it is currently unconfirmed about whether or not he is brainwashed or if he has any connections to the Federation or the Ghosts, he is confirmed to be one of the leaders of the criminal/terrorist syndicate known as The Five Knights, along with corporate leader Hidora Kai, anarchist Mace, cyberterrorist Raul Menendez and a currently unknown fifth leader. According to former member Vladimir Makarov, the five of them started working together to achieve their goals despite them being completely different, with Rorke's being that he and his mercenaries see war as a means for profit.

As the former Captain and member of the Ghosts and a major ally to the Federation, Rorke is a cold, odious and vindictive man who often played with his former teammates for moments before killing them for good. Rorke is a highly trained professional soldier and uses that as his advantage to strike fear into the enemies of the Federation for being a former Ghost. He appears to have lost all his loyalty towards the U.S., possibly showing a hint of anti-Americanism within him. He is also extremely psychopathic and bitter as he recalls the events of his betrayal and abandonment in Caracas, particularly when speaking with Elias. Although Rorke was largely seen as a sympathetic character by the Ghosts, any sympathy anyone had for him was lost after he shot Elias in the head, causing his sons to vow to kill him. 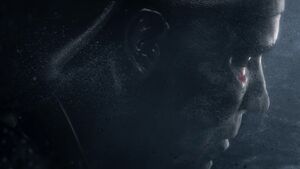 Rorke in the opening cinematic of "Ghost Stories", during the Tel Aviv War. 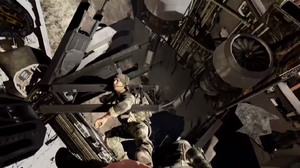 Rorke falls into the water after Elias lets him go. 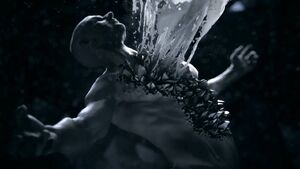 Rorke being tortured by the Federation. 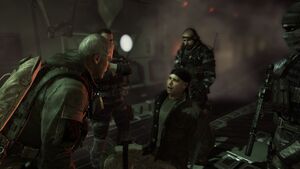 Rorke being interrogated by the Ghosts. 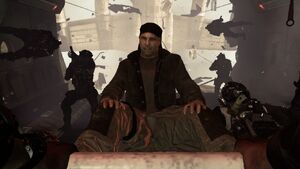 Rorke looking down at Logan during the plane scene. 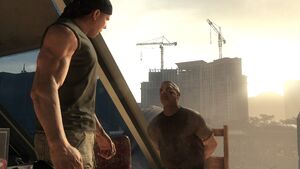 Rorke torturing Elias in front of his sons. 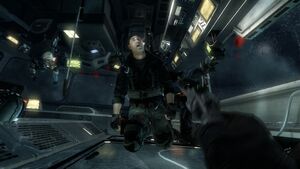 Rorke wounded by Logan with his revolver. 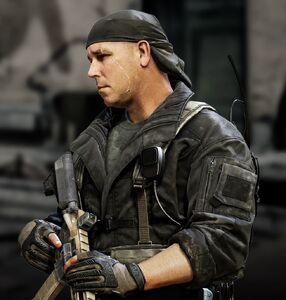 Gabriel Rorke as a special character for Ghosts multiplayer. 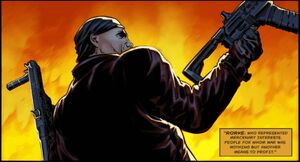 Rorke in the Call of Duty: Mobile comics.
Add a photo to this gallery

Retrieved from "https://villains.fandom.com/wiki/Gabriel_T._Rorke?oldid=4277600"
Community content is available under CC-BY-SA unless otherwise noted.