Protect Sharla and her friends by any means necessary (succeeded).

Carry out Egil's will and restore order (formerly).

Gadolt, also known as Jade Face and Green Face, is a minor antagonist in Xenoblade Chronicles. He was a Homs from Colony 6, where he was in charge of the Defence Force as its colonel. He was also Sharla's fiancé and a father figure to Juju. He was last seen heading towards the battlefield to carry out one more mission to finish off the Mechon, before eventually disappearing entirely.

Believed to have been long deceased, he was actually captured by the Mechon and taken back to Mechonis where he was experimented and heavily modified into a Faced Mechon. He became the newly made Face 20814 and his only goal now was to carry out the will of Mechonis.

Gadolt was an honorable and kind man to his allies. Sharla spoke highly of him in regards to how he put his life on the line of the others and how fair he treated her younger brother, Juju.

Upon being captured by the Mechon, Gadolt's memories were wiped away and was brainwashed by Egil. He was devoid of any kind of emotion and was made to carry out the will of Mechonis and restore order. Despite this, he showed to be quite perceptive and be marvelled at as he noted Shulk's mastery of the Monado and was astonished by it. He also appeared to be quite prideful of his newfound body and powers, believing himself to be an unstoppable force.

Following his defeat and the restoration of his mind and memories, Gadolt was returned to his former self and was grateful to see Sharla well, as well as her companions. His only wish now was for them to stop Egil and hope Sharla would make it alive, entrusting Reyn to keep her safe.

Gadolt was the colonel of the Defence Force in Colony 6. Gadolt remained behind with the Defence Force to fend off against the Mechon, while ordering Sharla and Juju to leave, in order to ensure their survival. This was the last time Sharla's seen and heard of Gadolt. Though there was no confirmation that he was dead, no one was able to find his body.

When Sharla meets with Shulk and Reyn, they enter inside the Ether Mine, in hopes of rescuing Juju, who had been captured by the Faced Mechon, Xord. There, they encounter the current colonel, Otharon, who revealed he had accompanied Gadolt, in hopes they could save the other men that were left behind, before ultimately being captured. When Otharon woke up, the only thing he found was Gadolt's rifle. Despite this, Sharla refused to accept that Gadolt was dead and that he was still alive, waiting for her.

As Shulk and his allies make their way through Mechonis, Egil begins to prepare and deploy his latest Faced Mechon to dispatch the group. He used Gadolt as the Core Unit for this Faced Mechon, though he noticed that Gadolt possessed a strong connection and attachment to his memories, particularly Sharla. Egil viewed this as a hindrance to the effectiveness of Gadolt's performance and proceeded to wipe out his memories, rendering him to an obedient soldier, now under the alias known as Jade Face.

Jade Face appears near the end of Mechonis Field where he stalks on Shulk's party before eventually disappearing. He later reappears in an attempt to assassinate them, but Shulk was able to evade his attacks, much to Jade Face's surprise. Sharla recognizes his voice, however, and calls out for Gadolt to come out. After a battle, Gadolt reveals himself to be alive but he does not answer any of Sharla's questions. Instead, he declares that he is carrying out the task on restoring order to the world. He then attempts to kill Sharla, though Reyn was able to save her and the party were able to escape.

Shulk and his party head out to find Egil and almost reach to him at the Meyneth Shrine, but before they could, they are ambushed by Gadolt once more, who had purposely waited, in order to draw them out. He once again noted Shulk for his mastery of the Monado and for that reason, he cannot afford him to live. Sharla tries to call out for him, but Reyn tells him that he is long gone and under the control of Egil. Sharla refuses to believe this, however.

After some battling, Reyn gets frustrated with Gadolt as he scolds him for trying to lay harm on Sharla. Gadolt dismays this, as he prepares to shoot at the party once more, though his bullets miss Sharla. He claims he doesn't know who Sharla is and that he much prefers having access to the body he was given. Despite this, Shulk noted that Gadolt's bullets were purposely missing Sharla. Sharla then asked if Gadolt remembers her, but he simply tells her and everyone else to die and feel the wrath of Mechonis. Meyneth, taking brief control of Fiora, then reveals that Gadolt's true self is in fact still alive and that remains deep inside hidden, hence why his attacks are not directed towards Sharla. She then explains to them that, if they buy her enough time, she can undo the memory wipe that Egil placed on him and restore his mind. This encourages the team to fight Gadolt once more and save him.

Afterwards, Meyneth proceeds to restore Gadolt's memories by using Final Cross. He is then injected out of his damaged Faced Mechon, in which Sharla then proceeds to rush over to his aid. Gadolt asks Sharla for her forgiveness, but Sharla assures to him that all is well as she's simply glad to have him back. Gadolt then explains to the party that like him, Egil was a good man but he fell under the corruption of fear and loss and is plotting on doing the same to everyone else on Bionis. He begs them to prevent him from doing so, in which everyone agrees rush off to do so. Reyn and Sharla stay behind for a bit, in which Reyn provides him some water for him to drink. Gadolt accepts his kind gesture and asks for his name. Reyn tells him his name, in which Gadolt then asks for him to keep Sharla safe, something that Reyn approved of.

Following the battle with Egil, he begins to blow up Agniratha, causing the party to rush out of the city. The explosion almost consumes them, until they are saved by Gadolt, using his Faced Mechon one last time. As a result, this gives Meyneth enough time to create a shield for the party, but in turn, this led to Gadolt's great sacrifice. Sharla watched in tears, while Gadolt smiled at her, satisfied that he was able to keep her safe.

In Super Smash Bros. For Wii U, Jade Face appears as one of the game's collectible trophies. 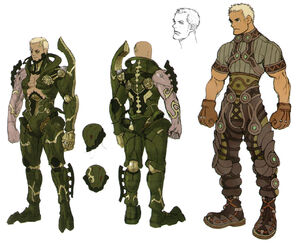 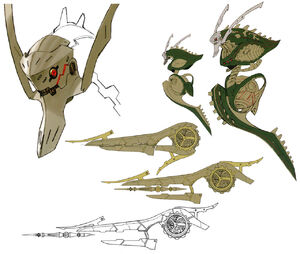 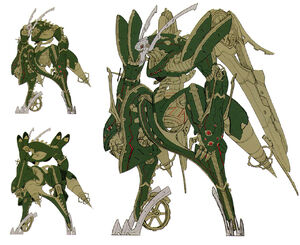