Claim the Kanohi Ignika for itself (partially succeeded, then failed).

Gadunka is a major antagonist in the Lego BIONICLE series and also served as the minor antagonist in the 2007 storyline. It was once a small Rahi before it was unwittingly exposed itself to the Kanohi Ignika's energy, thus transforming into a large, vicious creature.

The Gadunka was created by the Brotherhood of Makuta using Viruses and Liquid Protodermis to be one of the Rahi to populate the Matoran Universe. Later, Gadunka made its home in the Silver Seas surrounding the Pit and Metru Nui.

When the Great Cataclysm shattered the Pit and allowed its occupants to escape from the prison's destruction, it escaped into the Black Water in Mahri Nui.

When Nocturn placed the Kanohi Ignika on the seabed, Gadunka scurried under the mask for shelter. However unknown to it, it unwittingly exposed itself to the Mask of Life's energy, which turned it into the mutated creature. 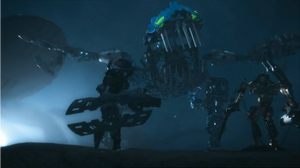 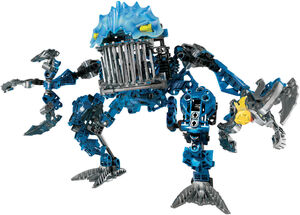 Gadunka in its set form. 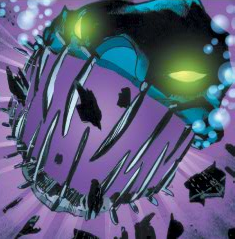 Gadunka, as it appears in the comic.
Add a photo to this gallery

Retrieved from "https://villains.fandom.com/wiki/Gadunka?oldid=3773377"
Community content is available under CC-BY-SA unless otherwise noted.