Carrying out his orders.

Serve the Don Eladio and the Cartel (succeeded for a while).

Gaff is a supporting antagonist in the fourth season of Breaking Bad. He is the lead enforcer and right-hand man of the head of the Juárez Cartel, Don Eladio Vuente, as well as replacing Tuco Salamanca's role of informing the cartel about the activity across the border.

He was portrayed by Maurice Compte.

Gaff and two other assassins are sent by the Cartel to hijack a Los Pollos Hermanos refrigerated truck. They kill the driver and hook up a tube to the exhaust pipe to redirect the exhaust into the truck's ventilation system, suffocated the guards in the process. Gaff and his crew then eat the driver's lunch and break into the truck and take a container of fry batter that was marked.

After the hijacking of the truck, Gus and the Cartel arrange for a negotiation meeting at one of Gus' warehouses. Gaff and two other goons arrive delivering a repeat ultimatum to Gus. However, when Gus doesn't accept or decline the offer, Gaff murders more of Gus' men.

Gaff sets a camp on a hill near one of Gus' warehouses and uses a sniper rifle to kill one of Gus' men. Continuing to terrorizing the crew, Gus comes out and walks right at Gaff and for his huevos, giving Gaff no satisfaction. Gaff ends the attack and leaves.

Gus finally accepts the Cartel's ultimatum and he, Mike, and Jesse head to Mexico to cook the signature blue meth for the Cartel. After Jesse takes the lead and successfully cooks a batch, they celebrate and Gaff tells Jesse he belongs to the Cartel now.

In the countryside, after the celebration, the Juárez Cartel is poisoned by Gus after drinking the Zafiro Añejo tequila that Gus spiked. When Don Eladio stumble, Gaff notices this and is garroted from behind and killed by Mike. 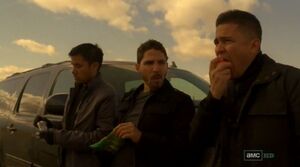 Gaff and his crew. 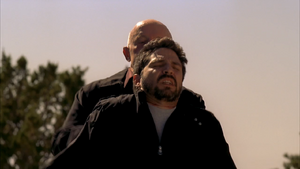 Gaff is garroted by Ehrmantraut.