Defeat BoBoiBoy and his friends (failed).

Help his leader to hunt all the Power Spheres (failed).

Brutal Right Hand
Gaga Naz is the one of the secondary antagonists of the 2016 Malaysian computer-animated film BoBoiBoy: The Movie. He is a member of Tengkotak along with Yoyo Oo and Kiki Ta.

He was voiced by Mohammad Azmir Selamat.

Gaga Naz along with the rest of Tengkotak chasing Klamkabot and tried to capture him, but he used his teleportation power to teleport himself along with the Floating Island.

Later, he, along with Bora Ra and Yoyo Oo arrived at the Earth to capture Ochobot. Gaga Naz fought BoBoiBoy and easily defeated him, but his friends fight with him until Bora Ra used his Blackhole Power to defeat them, leaving them along with captured Ochobot.

After the Tengkotak gang, along with Adu Du and Probe, arrived at their spaceship, Gaga Naz introduced Kiki Ta to Adu Du.

When they are on their way to the Floating Island, Gaga Naz asked Probe if he didn't see what they just did and explained that they already defeated BoBoiBoy and his friends until he and the rest of the gang (minus Kiki Ta) laughed at Adu Du and Probe.

When Yoyo Oo tried to find Klamkabot, Gaga Naz asked if he checked all of the passages leading out of the cave. Yoyo Oo said he did and asked if he think he don't know how to do his job, but Bora Ra break it up.

Later that night, Gaga Naz checked on the map screen and explained to Bora Ra that it's not only Klamkabot captured Ochobot, but he showed the map screen that BoBoiBoy is here too.

The next day, Bora Ra and Gaga Naz chased BoBoiBoy and his friends at the cave, and later Power Sphera factory. He shot Klamkabot and made Gopal fall off. Gaga Naz fought Yaya and got defeated. After commanded by Bora Ra to wipe out the rest of the gang, he transformed into a monstrous giant form and almost deatroyed them. He leave the factory along with Bora Ra and captured Klamkabot.

At the location where their spaceship parked here, he watch Bora Ra and Yoyo Oo suck up Klamkabot's energy. He noticed a sound on the spaceship. When he entered the spaceship, he caught Adu Du, Probe and Papa Zola and sent them to Bora Ra so he can used them as their hostages to make BoBoiBoy surrender Ochobot to him. When the gang planned to escape along with Klamkabot, Gaga Naz tried to stop them, but Yaya used Gravitational Pull on him. When Bora Ra fought BoBoiBoy, Gaga Naz chased Yaya, Ying and Gopal until their powers are upgraded to defeat him.

He, along with Yoyo Oo and Kiki Ta, are only surviving members who were arrested by Koko Ci for their crimes.

Gaga Naz is a really fat and very big alien. He wears a robot claw in his right hand. He wears purple shirt with belt in the middle of it. 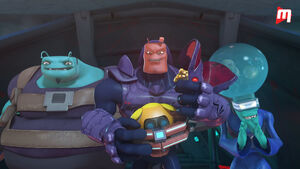 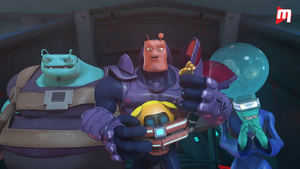 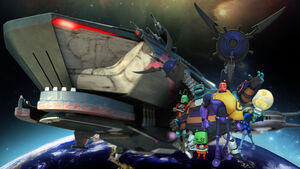