Playing with his family (before death).

Kill everyone he knows (failed).

Gage William Creed (or simply Gage) is the main antagonist from the 1983 book, Pet Sematary by Stephen King, and the 1989 film of the same name but in the 2019 movie Gage is a protagonist instead, as his and his sister Ellie's roles were switched. He was the three-year-old son of Louis and Rachel Creed, and the younger brother of Ellie.

He was portrayed by Miko Hughes in the 1989 version, and twins Hugo and Lucas Lavoie in the 2019 version.

Gage was originally an innocent and sweet little boy. However, he was run over by a truck at Thanksgiving. Gage's death was actually caused by the magic of the Pet Sematary where his father, Louis, buried their cat, Church, some time ago, which caused him to be brought back to life. After Gage's funeral, Louis was still under the corrupt influence of the Pet Sematary. In due to his increasingly instability and grief, Louis dug out Gage's body and foolishly buried his son in the Pet Sematary.

Gage really returned to life, but he was no longer a sweet and innocent child. Although he looked the same as before his death, Gage was possessed by the necromatic force Wendigo infested at Pet Sematary and was full of hatred and cruelty. At first, Gage entered the room where his father was sleeping, stole his scalpel, and walked into their neighbor, Jud Crandall's house along with Church. Jud tried to protect himself with a knife, but Church jumped on him, and forced him to drop it. Gage then jumps on Jud and stabbed him to death.

When Rachel arrived home, she went to Jud's house, as she promised him before. She didn't see Jud's body, as Church and Gage lured her upstairs. When Rachel saw her son alive, she happily hugged him. Gage laughed and said that he had brought something for her. He then stabbed his mother to death violently.

Meanwhile, Louis woke up and immediately found out what happened. He prepared some lethal injections and headed to Jud's house. Firstly, Louis lured Church with a raw steak and pricked him the injection, which killed him for once and all. Louis then entered Jud's house where he found his old friend and wife dead while Gage was giggling wickedly somewhere in the house. Gage then attacked Louis with the scalpel, but he was too clumsy, and Louis managed to flatten him. Louis then pricked his son with two injections and let him go. Gage tried to attack his father again, but the lethal substance started to work already and Gage fell down dead.

Louis then soaked the house in kerosene, set it on fire, and left all of the bodies except Rachel's, inside.

The film actually showed the same scenes of Gage with the scalpel as the book did, but there were also some different moments.

When Gage and Church entered Jud's house, Jud heard them, got a knife, and started to look for them. Gage decided to play a game of hide and seek with Jud and hid under the bed. After Church sidetracked Jud, Gage sliced Jud's Achilles tendon, then slashed his mouth, and ripped his throat out.

After he killed the old man and his mother too, Gage phoned Louis and wanted to play with him, as he did with Jud and Rachel. Frightened, Louis entered Jud's house, only to see that it was completely devastated. After Louis went upstairs, Rachel's corpse suddenly fell from the attic, and was hanging by her neck. Gage, standing above her, jumped on Louis and bit him, tearing his meat. When Louis injected him, Gage stopped attacking, slowly walked away, said: "No fair!" and looked reproachfully at Louis. Gage acted like a normal child again, before succumbing to his death.

Gage plays the same role as he did in the novel and 1989 film, but he is spared from being run over by the truck and becoming a zombie, and it's his sister Ellie who gets struck and dies instead. At the end of the movie, his zombified parents and sister, followed by Church, head to the car Louis had previously locked him in. Louis gestures to Gage to unlock the car. The screen fades to black as Gage unlocks the car. It is heavily implied that Gage is killed and brought back shortly after. 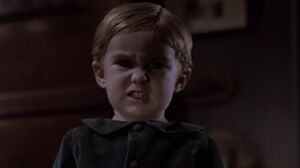 Gage and Louis with an undead Ellie and Rachel in the alternate ending.