To kill Dogs and Wolves

Serial Killers
Gaia is the second antagonist of Ginga Nagareboshi Gin after death of Akakabuto.

He is a black-white Japanese Wolf with gray on the his face and scar on right eye outburst and bushy, white eyebrows

Gaia was a very cruel and tough ruler. He was in the position of a god like his goddess, and did not tolerate failures. He used his special attack on Zetsu Tenrō Battōga but was likely to have many other special attacks.

Gaia's family killed Reima's father, the original king of the underground king of wolves, but Reima himself escaped and began to plan Gaia's outgrowth.

Gaia was aware of this, and like Reima he began to train eight Sirius warriors. His aim was to find Reima's hideout and kill him. When Gaia hears that there's a dog who knows the Zetsu Tenrō Battōga's technique, he sends the Underworld ten fighters to Honshū to find that dog and Reima's palace. Fighters kill some dogs, for example Bill and Bemu, but they will be killed and fail in their actual job.

When Reima and Gin later arrive in the underground kingdom, Gaia and Juga will fight their warriors against these forces. Eventually, Gaia, with his own army, is involved in the battle and during the battle she ripped off the other Reima's other leg. Sirius's eight male dogs challenge Gaia's battle, but Gaia turns out to be a very dangerous and powerful opponent. Gaia kills Raiga, Sakon and Ukon by bowing their heads across. Gin finally succeeds in wounding Gaia deadly with Zetsu Tenrō Battōga.

A sudden, powerful earthquake surprises the dogs, and during the chaos, Gaia sees his chance and attacks Gin, but Reima comes in. Gaia and Reima remain in the duel on the other side of the ramp and die when the falling stones are buried. 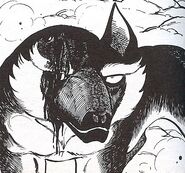 Retrieved from "https://villains.fandom.com/wiki/Gaia_(Ginga_Nagareboshi_Gin)?oldid=3783492"
Community content is available under CC-BY-SA unless otherwise noted.