Enforce the will of Darth Caedus.

The Galactic Alliance Guard (GAG) is a secret police organization from the "Legends" timeline of the Star Wars universe. Their most prominent role is in the Legacy Of The Force series of novels. It was created by Chief of State Cal Omas and placed under the command of Colonel Jacen Solo.

The Galactic Alliance Guard was created by Galactic Alliance Chief of State Cal Omas and Senator G'vli G'Si after a series of terrorist attacks on the Alliance capital of Coruscant. Leadership was originally offered to Jedi Master Mara Jade Skywalker, former Emperor's hand and wife of Grand Master Luke Skywalker, however, she declined due to the Jedi's opposition to the government sanctioning secret police tactics. Jacen Solo then accepted leadership of the GAG along with the military rank of colonel. However, Solo had become the Sith apprentice of the Dark Lady Lumiya and had committed himself to the cause of lasting peace and stability at any cost. He then recruited his cousin, Ben Skywalker, and promoted Skywalker to the rank of lieutenant.

Shortly after its formation, numerous special forces units of the GAG were deployed to Coruscant for antiterrorist operations. Areas with heavy concentrations of Corellian inhabitants were particularly targeted by the Guard. These operations were largely successful, and Jacen Solo was hailed as a hero by many Coruscanti citizens. However, Grand Admiral Gilad Pellaeon distrusted the Guard, viewing it with disgust as an aspect of the Galactic Empire that he abolished in his reforms. Solo's detractors likened the guard to the former Stormtroopers of the Galactic Empire.

To counter the increasing threat Corellia's secessionist movement posed, the GAG was authorized to intern, deport, and interrogate its subjects. They were further authorized to monitor civilians for terrorists, insurgents, and anyone who could be branded as a traitor to the Alliance. The GAG was even authorized by Solo to extrajudicial executions of subjects branded as threats.

As tensions brewed into another civil war, the Guard's role was expanded beyond domestic security. An Imperial Star Destroyer, the Anakin Solo was commissioned to serve as a mobile base of operations for the GAG. The Guard was deployed to numerous missions for the Alliance.

The Guard also spied on government officials, such as Cal Omas. When Jacen Solo and Admiral Cha Niathal seized control over the Alliance government, the Guard supported them, even arresting Omas on the grounds of high treason.

After killing his aunt, Mara Jade Skywalker, in a lightsaber duel, Jacen Solo -now Sith Lord Darth Caedus- led the Galactic Alliance Guard in operations against the Jedi. During his aunt's funeral, Caedus instructed a contingent of GAG troopers to arrest his fugitive parents, Han and Leia Organa Solo, on sight. Furthermore, Caedus deployed a battalion of Galactic Alliance Guard troops led by Major Salle Serpa to the Jedi Praxeum on Ossus. There, the battalion would hold the Jedi students as hostages while Caedus and the rest of the Guard pursued the Jedi on Ossus and Kashyyyk.

During Caedus' attack on the planet Fondor, the GAG fought with Alliance and Imperial forces, bombarding the planet's shipyards and proceeding to wipe out Fondor's major cities as a warning against those who would attempt to resist the Galactic Alliance.  By then, the planet had already surrendered, but Caedus continued bombarding the planet's civilian urban centers. Imperial Admiral Gilad Pellaeon was killed upon order of Caedus by his new apprentice, Lieutenant Tahiri Veila when he disapproved of Caedus' methods and tried to turn against him. Following this, Caedus returned to Coruscant, proclaiming himself publicly as Darth Caedus and taking complete control of the Galactic Alliance with the help of the Galactic Alliance Guard.

After the death of Darth Caedus, the Galactic Alliance Guard was disbanded. The remaining troopers who accompanied Caedus before his death were forced to submit themselves to the victorious Jedi Coalition. 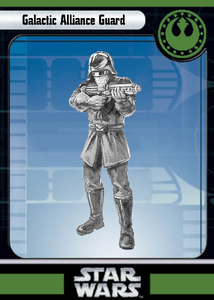 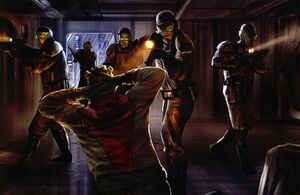