Defeat the Rebel Alliance.
Establish peace with the New Republic (all failed).

The Galactic Empire, often simply referred to as the Empire, is the central antagonistic faction of the Star Wars franchise.

It was originally the Galactic Republic before it was rebuilt into an autocratic dictatorship by Emperor Palpatine who was secretly the Supreme Chancellor of the Galactic Republic and Darth Vader. They ruled most of the galaxy until they were defeated and overthrown by the Rebel Alliance, which was reorganized into the New Republic after the Battle of Endor, one of the Empire's greatest defeats and, subsequently, the beginning of the Empire's collapse.

The Galactic Empire, which was the first to be an interplanetary empire, was founded in 19 BBY, the final year and final days of the Galactic Republic and the Jedi Order, as well as the Clone Wars, after Clone Order 66 was enacted by Supreme Chancellor Sheev Palpatine, which ordered all clone troopers to turn on their Jedi Generals and execute them. Order 66 took place immediately after Jedi Master Mace Windu and three other Jedi Masters went and attempted to arrest the now-revealed Darth Sidious but were killed by the Sith Lord with the help of Jedi Knight now-turned Sith apprentice Darth Vader. Sidious ordered his new apprentice to go to the Jedi Temple with a great many of the 501st Clone Battalion and kill all Jedi within the Temple, including the younglings.

To ensure "Peace and Security" to the galaxy, the Republic was reorganized into an oppressive Empire based on tyranny and brutality. Funds were diverted from social programs into a massive military buildup, most notably the Stormtroopers. The Empire was also the creator of the Death Star, which they used to destroy Alderaan.

After the destruction of their second Death Star, and the death of Galactic Emperor Palpatine at the hands of Darth Vader, though the latter had been converted from the dark side back to the light side due to the actions of his son Luke Skywalker, the Empire had begun to collapse into smaller fragments of what it used to be, and the Rebellion had reorganized into the New Republic to protect the galaxy, just as its predecessor did before the rise of the Empire.

Palpatine had not planned for succession and instead planned a last vindictive strike against not only Rebel worlds but the Empire as well for failing to protect him. Called Operation Cinder part of the Contingency, worlds such as Naboo and Vardos were targeted for destruction. The Imperial forces carrying out this mission were defeated by the Rebels.

In 5 ABY, a year after the Battle of Endor, the rest of the Imperial remnant forces in the Anoat sector, Kashyyyk, Velcar sector, Malastare, and Jakku were defeated by the New Republic after attempting a final stand at Counselor Rax's home desert planet Jakku. The Imperials were dealt a decisive blow at Jakku, with the remains of many of their star destroyers crashed in the deserts of that world. A short time after the Battle of Jakku, Grand Vizier Mas Amedda signed a peace treaty called the Galactic Concordance and a document called Imperial Instruments of Surrender with the New Republic that imposed harsh terms on what was left of the Galactic Empire.

After the signing of the concordance, a couple of Imperial remnants: the Cold War Imperial remnant and the Queluhan Nebula Imperial remnant jumps into hyperspace to the Unknown Regions except for the Core Worlds and Inner Rim Imperial remnant. There, Snoke began to reestablish the remnants of the Galactic Empire into the First Order and took leadership.

The deaths of Emperor Palpatine and Darth Vader, caused the downfall of the Empire, as Palpatine did not plan for succession of rule. Various imperial figures became warlords in an attempt to claim the Empire for themselves, while the rebels grew into the New Republic. By the time the Empire had been restructured, its economy was weak, and it only ruled a small handful of planets, reducing the Empire to the Imperial Remnant. The Remnant signed a peace treaty with the New Republic ending the Galactic Civil War. The Remnant was not a dictatorship, but a confederacy that did not enlist in xenophobia or slavery as the Galactic Empire historically had. When the Yuuzhan Vong invaded the Galaxy, the Remnant fought alongside the New Republic and defeated the invaders.

When Jagged Fel became the Head of State for the Imperial Remnant, the Remnant began to grow once more. Eventually, the Remnant was once again an Empire, but the new Empire was quite sympathetic. Aliens were treated just as humans were treated, funds went to social programs and its military protected the innocent. It even trained its own branch of Force-sensitives, the Imperial Knights. At the same time, the One Sith lead by Darth Krayt began manipulating events throughout the Galaxy. They sabotaged the Ossus recovery project, which would help worlds devastated by the Yuuzhan Vong. The Galactic Alliance blamed the Vong and soon the Alliance was in chaos. As the Galactic Alliance threatened the lives of the people of the Fel Empire, the Empire reluctantly declared war on its former ally. The Fel Empire emerged victoriously and briefly ruled the Galaxy.

The reign of the Fel Empire was short. Darth Krayt staged a coup against Emperor Roan Fel and crowned himself Emperor. The Fel Empire then became Darth Krayt's Galactic Empire. Emperor Krayt waged a genocidal war against the planet, Mon Cala. This rendered the planet was uninhabitable, and millions of life-forms became extinct.

But Roan Fel was not dead and formed the Empire-in-Exile, a rebel faction determined to restore the Glory of the Fel Empire. They were joined by the Alliance Remnant, another rebel faction determined to restore the Galactic Alliance. After a long war, the two factions emerged victoriously, but Fel died in the final battle (He fell to the dark side and was killed by Antares Draco). In the end, the Empire merged with the Alliance and the Jedi Order to form the Galactic Federation Triumvirate, a peaceful government that united every single planet in the galaxy.

The Galactic Empire's Imperial Army was the successor of the Republic military was responsible for carrying out military operations and maintaining control over the Empire's planets and outposts. It is divided into 4 sections.

Glory to the Empire

With the end of the Clone Wars, Darth Sidious became Emperor of the First Galactic Empire. 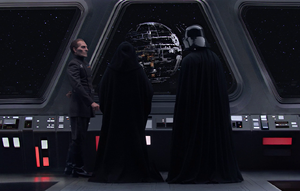 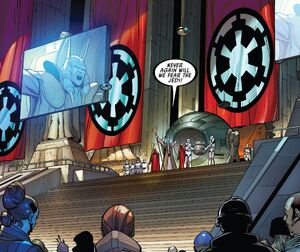 A celebration of the demise of the Jedi led by Grand Vizier Mas Amedda. 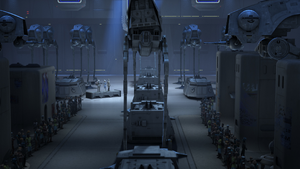 "Glory of the Empire" was played during the yearly Empire Day celebrations across Imperial space. 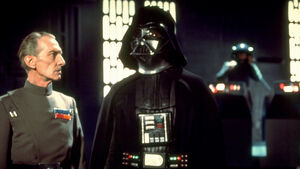 The Empire's forces assembled for the Emperor's arrival. 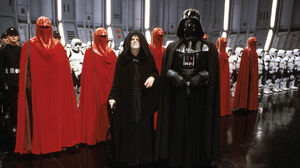 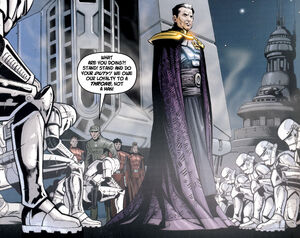 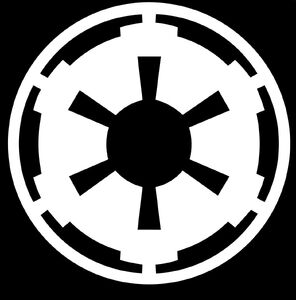 The New Galactic Empire.
Add a photo to this gallery

Retrieved from "https://villains.fandom.com/wiki/Galactic_Empire?oldid=4280955"
Community content is available under CC-BY-SA unless otherwise noted.