Watching over her subordinates.

Destroy 1,000 planets so she may obtain immortality and rule the Milky Way.

Prevent anyone from learning her true identity.

Galactic Empress Meadow is the mysterious ruler of the Galactic Imperial Army Zone and the main antagonist of Chikyuu Sentai Fiveman. She appears as the head of a woman in the sky with a colorful rainbow mane when giving orders to her subordinates. Her goal is to kill all life on 1000 inhabited planets across the universe in order to complete a ritual that will grant her eternal life.

She is later revealed to be an illusion created by Zone's flagship, Vulgyre.

She was portrayed by Chika Matsui and voiced by Keiko Konno.

Meadow was based upon an humanoid alien whom Vulgyre desired to make his queen. She refused and, in the process of trying to run away from him, fell off a cliff and died. Vulgyre took her body and stored it away within himself, using her visage to serve as the leader of Zone while he controlled it in secret.

Meadow's angelic visage soon attracted many aliens from across the universe to the Zone, all of them deeply and fanatically devoted to their Galactic Empress. With a vast array of forces at her command, Meadow led the Zone in the conquest and destruction of inhabited planets across the universe, seeking to destroy 1000 of them in order to complete a ritual that would grant her immortality and enable her to rule over the Milky Way.

One of the planets destroyed by Zone was the planet Sidon. After life to the planet was restored by the Hoshikawa family, Meadow had the Zone return to Sidon and wipe out its remaining inhabitants. The Hoshikawa children managed to escape Zone's wrath, but were separated from their parents before they could return to Earth with them.

Eventually, after destroying 999 worlds across the galaxy, the Zone arrived at Earth, which Meadow had selected to be the 1000th and final planet destroyed in order to complete the ritual. However, as the Zone began their advance attack, they were met by the five Hoshikawa children that had narrowly escaped them years ago. In the 20 years since Zone attacked Sidon, the Hoshikawa siblings had trained to become the Fivemen so they would be ready to defend the Earth should Zone ever come for it.

After the Fivemen repelled Zone's invasion, Meadow ordered Captain Garoa to focus on destroying them so there would be nobody left to stand in their way. However, Meadow would quickly grow dissatisfied with Garoa's continued defeats against the Fivemen, eventually leading her to replace Garoa as captain of Galactic Battleship Vulgyre with Captain Chevalier after the latter returned. Garoa meanwhile was eventually demoted to janitor.

Though Chevalier handed the Fivemen some very serious defeats, Zone was still little closer to conquering the planet. Zone's continued defeats against the Fivemen, as well as Garoa's accidental yet almost discovery which will reveal both the entombed corpse of the real Meadow and Vulgyre as a sentient spacecraft would eventually lead the illusioned Meadow to adopt a more fiery, angrier visage as she grew frustrated with her subordinates' continued failures, including telling them not to discover what was in that secret chamber.

Not long after though, as Meadow rewards Garoa back as Captain for destroying the Five Robo, Chevalier was able to successfully defeat the Fivemen using a Galactic Warrior with the power to trap things in stone. After trapping four out of the five Fivemen in stone, Chevalier captured Gaku and brought him to Vulgyre so he could personally seal him in front of Meadow.

However, Gaku was able to escape thanks to Gunther and soon discovered that the Vulgyre battleship was actually alive. Gaku revealed this to the Zone commanders, slicing off a portion of the wall to reveal large veins running alongside it. It was at that point that Meadow revealed that the Zone's conquests were actually to power up and nurture Vulgyre, and that Vulgyre would be an ally they need to assist them in destroying Earth and conquering the universe. Meadow then announced that she had no more use for her henchmen and had Vulgyre take off from the North Pole and go on a rampage through a city in Japan.

However, during the attack Vulgyre was exposed to the scent of the flowers of Sidon, which the Hoshikawa siblings had been growing at New Town High school, causing it to crash. It was then that Meadow's visage was revealed to be an illusion projected from Vulgyre, which promptly shattered before the Galactic Commanders' very eyes. It was then that Vulgyre himself spoke up and revealed that Galactic Empress Meadow was really just a projection of sorts created by him. As the truth had now been revealed, Vulgyre decided to take direct command of Zone.

After the Fiveman break into Vulgyre to use the flowers of Sidon to destroy him, they discover the body of Meadow entombed within Vulgyre. Her spirit then awakens and reveals to the Fivemen that she was once a normal girl who was coveted by Vulgyre, and that Vulgyre trapped her body within himself after her death, leading the Fivemen use the Sidon Flowers to free her and allow her spirit to rest eternally. 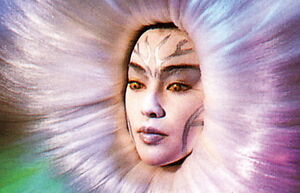 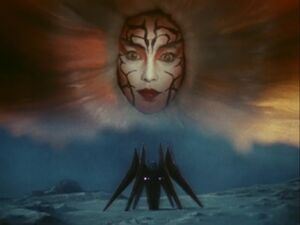 Meadow becomes furious in response to continued failures, as well as her secret being almost discovered by Garoa. 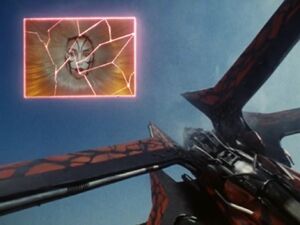