Render all life under its domination.
Crush the Space Pirates (all succeeded)
Capture Samus Aran after disobeying and uncovering their top secrets (presumably ongoing)

The Galactic Federation are the overaching anti-villains in the Metroid franchise. While not open villains, their darker side is revealed more and more as the games progress. By the Metroid Prime trilogy, they seem to be on par with the Space Pirates in their goals, as they will not hesitate to use terrorism, even at one point turning Samus into a human bioweapon by injecting Phazon into her.

The Federation was created in the year 2003 on planet Earth. Most of its primary soldiers, commanders and agents are humans from Earth, or humanoid extraterrestrials such as Samus or Gandrayda. The Federation are very elitist, hence their human origins. A sign of their corruption stems from their origin. They began life as cosmic police, protecting planets and civilizations from external threats. The Space Pirates arose as the ever present threat to the Federation, raiding Federation ships, killing or enslaving crew and raiding ammunition and prizes, but the Federation were not content with simple Galactic skirmishes against the Pirates. The Federation sought complete genocide against the Pirates.

In Samus' first mission, the Federation manipulate her using her hate against the Pirates to hunt down the Pirates and their stolen Metroids and destroy them all. While the Federation are shown as protagonists, there is nothing noble about their goal: genocide.

In the first game in the Metroid Prime trilogy, the Federation does not appear. But they appear behind the scenes. The Federation (off-screen) give Samus her mission to travel to planet Tallon IV and they order her to find the signal and investigate. She ends up finding the Pirates and their new bioweapons, Phazon and Metroid Prime. She furthers the Federation's goal of Pirate genocide by eradicating all Pirate life on Tallon IV.

The first sign of corruption in the Federation was seen in Metroid Prime 2: Echoes, when they experimented with Phazon, despite its destructive qualities. When they left planet Aether they took large amounts of Phazon with them, for bioweaponry purposes, and they set about developing the Phazon Enhancement Device. One of these was later given to Samus turning her into a living weapon.

Another sign of their corruption was their goal to have every system in the Universe controlled by their police. Also, when the first confederate meeting was held, they could only accept humanoid creatures in.

In Metroid Prime 3: Corruption, the Federation were giving full Phazon devices to their soldiers, even causing them to suffer Phazon sickness - one soldier is seen shaking his arm, but brushes it off eventually. The Federation are also revealed to have a shadowy overseer who gives orders. He is never seen, but his goal of using Phazon against the Pirates seems questionable.

In the events of Metroid: Other M, the Federation were using full biological experiments to make an army of Zebesian Space Pirates; their original enemy, they had cloned them and also cloned Mother Brain herself, and were planning on amassing an army. Samus and Adam Malkovich found this out and planned to destroy the research. Adam blew up the station and Samus destroyed the bosses which the Federation had  cloned; thus severely angering the Galactic Federation.

Samus is recruited by The Galactic Federation to protect researchers on Planet SR388 where Samus is attacked and unknowingly infected by an X-Parasite. On the way back to HQ Samus falls unconscious and her ship is destroyed, though her escape pod saved her. The federation surgically dismantled Samus' suit to save her but were unable to remove the X-Parasite from her safely. They found a cure using Metroid DNA and gave her a new ship under the condition of following the orders of the ship's computer, whom she nicknames after Adam. They send her to the BSL research station to investigate an explosion only to discover that the X have wiped out the ship and an X mimicking her, known as the SA-X, is loose due to the infected suit parts being sent to the station for examination. The Federation supports her with downloaded weapons data but eventually stops, fearing she will take on the SA-X. After some small disobedience on orders, Samus eventually completely disobeys the federation and discovers that they were cloning metroids. After the SA-X destroys the wing of the ship containing the metroids, Samus learns the truth. The Galactic Federation plans to capture the X-Parasites and the SA-X for use as a bioweapon. Knowing that this will lead to the end of the universe if the X escape, Samus convinces Adam (who had the brain of the original Adam downloaded into him) to let her stop them and wipe out the X. She succeeds, defeating the SA-X and setting the BSL to crash into SR388, destroying both, wiping out the X once and for all. Samus ponders what the Federation will do to her now that she deliberately disobeyed orders but believes one person will understand her actions. What the Galactic Federation plans to do with Samus afterwards is currently unknown.

One day, the Galactic Federation receive a video transmission possibly confirming the existence of X Parasites within a remote planet known as ZDR. They dispatch power killing machines known as the E.M.M.I. to investigate, but have mysteriously lost contact with all of them. These Galactic Federation machines will become an antagonizing force for Samus Aran during her exploration of the planet as these machines will relentlessly hunt her down and attempt to extract the Metroid DNA she contains within her.

The Galactic Federation has a powerful array of advanced technology and machines at their disposal (many of these weapons however fail in comparison to Samus' Advance Chozo-Based weaponry). Possibly around the time of Super Metroid, the Galactic Federation had begun experimenting and researching the use of more Biological weapons at their disposal, specifically the titular creatures known as Metroids. 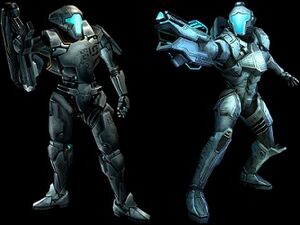 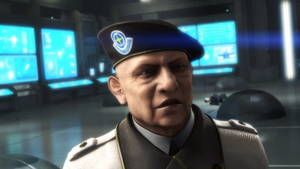 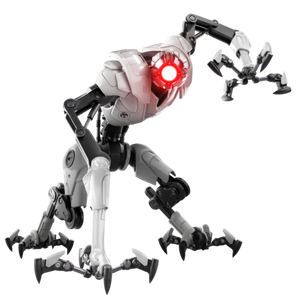 An E.M.M.I., one of the Galactic Federation's inventions.