Defeat the Rebellion.
Claim the Heart of Etheria and use it to wipe out all of Horde Prime's enemies (both failed).

The Galactic Horde was founded by Horde Prime in the distant past. Using vast armies of clones and fleets of starships, they conquered most of the known universe. After receiving Hordak's distress signal, they invade Etheria at the end of the fourth season. During the fifth season, their forces occupy Etheria and blockade the planet.

The Galactic Horde also invaded and destroyed the Star Siblings' planet, forcing the Star Siblings to go on the run from them. They also attacked a crystal planet that had acted as a refugee center for those on the run from the Horde. After conquering the crystal planet, Horde Prime had the planet stripped of all its resources on the surface, rendering the world dangerously unstable.

After being stranded on Etheria, Hordak created a separate faction of the Horde and sought to create a portal to summon the Galactic Horde's armies.

Their existence is revealed in the Season 3 premiere "The Price of Power". During her interrogation at Bright Moon, Shadow Weaver reveals to the Rebellion's leaders that Hordak's plan is to use a portal to summon the Galactic Horde's armies. She describes them as "a force so large, you cannot even comprehend it."

They make their first appearance at the end of Season 3. Their armada is shown heading towards a shattered planet as Horde Prime receives Hordak's distress signal aboard his flagship, the Velvet Glove.

The Horde armada is briefly shown at the end of "Mer-Mysteries". Numerous starships are seen gathering around the Velvet Glove.

The Galactic Horde's fleet arrives at Etheria during the fourth season's finale, "Destiny Part 2". Their starships appear over Etheria's skies immediately after She-Ra's sword is shattered by Adora.

Following the Galactic Horde's arrival, they easily conquered most of Etheria. They forced the Rebellion to abandon its stronghold at Bright Moon and hide in the Whispering Woods under a cloaking spell. They presumably conquered the Kingdom of Plumeria, as Plumeria's citizens are shown evacuating.

Later, a large contingent of Horde robots is sent to attack the Rebellion's camp. They nearly overwhelm the Princesses before being called off by Horde Prime. This enables the Princesses to regroup and work together to destroy the attacking force.

After the episode "Perils of Peekabluee", the Galactic Horde used the brainwashed Princesses to lead their occupations in various towns across Etheria. The town of Erelandia was amongst those taken over by the Galactic Horde.

In the episode "An Ill Wind", a mass revolt breaks out across numerous planets under Horde occupation. According to one of Prime's clones, at least a dozen planets had staged successful uprisings with the Star Siblings acting as the leaders. This makes Horde Prime even more determined to acquire the Heart of Etheria.

The Galactic Horde appears to be a totalitarian absolute monarchy completely under the rule of Horde Prime. Whether the empire has a capital or homeworld is unknown. Horde Prime is shown to rule from his gigantic flagship, the Velvet Glove.

According to Hordak, the Galactic Horde holds dominion over the entirety of the known universe. During Hordak's time as a general, the Horde Empire conquered multiple galaxies as well as countless worlds.

The Galactic Horde's society is based around a cult of personality surrounding their leader, Horde Prime. Everything in the empire is seen as an extension of Prime's will. Clones in the empire are shown to dress uniformly. Individualistic thinking is forbidden as only Prime's thoughts are considered important. Any clones which develop abnormalities are subjected to extreme discrimination and persecution, as Hordak was effectively sent to die due to his genetic defects and independent nature. Racism against other species is embedded in their culture, such that non-clone species are deemed inferior to Horde Prime and his clones. Such peoples who live under Horde Prime are thus regarded as lower class subjects who exist only to be slaves of the empire, tools to be discarded when no longer useful.

The intergalactic Horde is shown to possess technology far more advanced and superior in comparison to its Etherian counterpart, or even the First Ones' technology. They make use of massive spaceships, holograms, mass-produced cloning, and very effective long-range communication systems and scanners. They are implied to possess planet-destroying capabilities as their appearance in the third season's finale suggests that they shattered a moon.

They are later shown to brainwash Etheria's people using control chips that fuse with one's nervous system. These control chips are connected to Horde Prime's hive mind, enabling Prime to see through the eyes of those chipped and even speak through them. 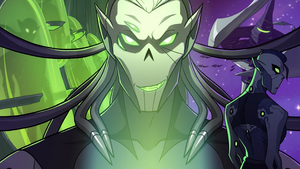 Horde Prime and his forces in the Season 5 intro. 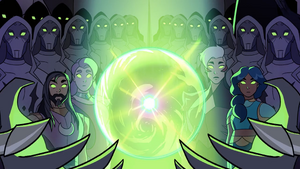 The Galactic Horde in the Season 5 intro. 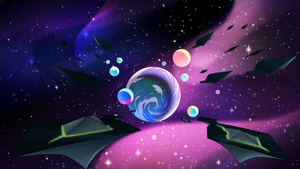 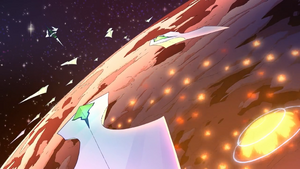 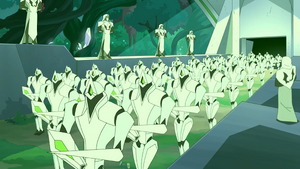 The Horde's armies in Catra's vision. 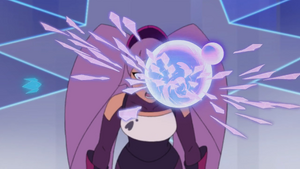 Hologram of the Galactic Horde's blockade around Etheria. 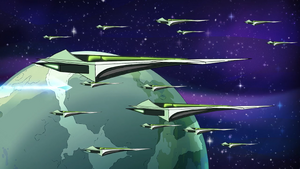 Starships of the Galactic Horde