Destroy the life off 1000 planets in the name of Zone.

Alien Monsters
The Galactic Warriors are creatures used by the Galactic Imperial Army Zone in their conquest of planets and antagonists in Chikyuu Sentai Fiveman.

After a Galactic Warrior is defeated, a Gorlin is summoned to assimilate the Warrior and transform into a giant version of it.

After the Hoshikawa family restored life to the planet Sidon, the Zone brought the Galactic Warrior Gamerugin with them to aid their effort in making the planet lifeless again. They were able to raze the planet, but were unable to stop the Hoshikawa children from escaping back to Earth.

When the Zone targeted Earth as the 1000th planet for them to destroy, they brought along Gamerugin again to assist in their advance attack. However, their attack was repelled by the now-grown up children of the Hoshikawa family, who became the Fivemen to defend the planet from Zone should they ever attack. After Gamerugin was destroyed by Zone, a Gorlin was summoned to copy it, only for the enlarged Gamerugin to be destroyed by the Fivemen in Five Robo.

Eventually, after the many failures of the Galactic Warriors to defeat the Fivemen, Doldora invented a new machine to create Combined Galactic Warriors by combining two Galactic Warriors together. Captain Garoa was pleased, believing it would be enough to solidify his position in Zone against his rival Captain Chevalier, only to be dismayed when he discovered Chevalier had a similar device aboard his personal ship. 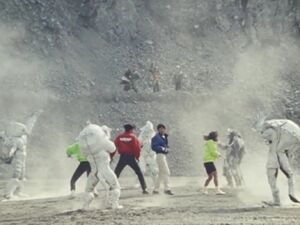 The ghosts of defeated Galactic Warriors summoned by Chamelezarugin to fight the Fivemen.