Destroy Earth as part of their list of crushed planets.

Destroy UGSF, AGAD and their starfighters.

Alien Military Destroyers
Galagans are insectoid alien species from Dark Space, where they inhabit a planet of the same name. Interestingly when they first debuted (Galaxian) their race name is not known until its famous sequel, Galaga. They are obsessed over with attacking planet Earth, only to be thwarted by Earth's agency called United Galaxy Space Force (aka UGSF) and their gifted spacecrafts piloting their powerful spacecrafts.

They still obsess over Earth, and haven't changed their mind about that.

The Galagan race inhabit their home planet, which appears to have had an apocalyptic event at some point. They're military is the Galaga Legions. The Galaga are a strange grey-skined species with red eyes. The wear armor though and, are willing to protect their planet. It doesn't seem like they're naturally evil, but in the aftermath the War of 2288 one alien lost in space stated that the only reason they attacked, was because their ruler. told them that Planet Galaga was in danger. They fly insectoid organic-robotic spacecraft, and are often found in armada.

It seems as if the Planet Galaga had gone through a cataclysmic effect. The Galaga came under a government of dictation at an unknown point in time. The Galaga discovered planet Earth in the 2270 A.D.

In the year 2279 a Galaga armada approached the galaxy. The United Galaxy Space Force (aka UGSF, the players' faction) attempted to be diplomatic but the Galagas were not the type of diplomats, as the UGSF found out the hard way. Before long the UGSF dispatched a group of three squads made up of three fighter types: Galaxip, Galaxy Ships, and Quazar Ships to intercept and destroy the Galaga Vanguard. The mission was successful and the first Galaga wave was wiped out.

When Galaga Armada discovered their Earth had defeated their spearhead, they sent a much bigger and more powerful fleet. Earth then had three-month war with the Galaga fleet before once again driving them into retreat, Galaga then stood by as Earth developed and reinforced itself even more. Earth utilized Gyaraku Starfighter, the most famous starfighter of the Galaga franchise.

While exploring parts of the galaxy Galaxip 79 (the protagonist starfighter from Galaxian) probe ran across an armada of then-unknown alien fleet. Before long the probe received a message saying "We are the Galaxians our mission destroy all aliens." This meant that the alien forces are not friendly. Suddenly a fighter from the alien came zooming towards the probe firing many shots. The probe managed to defend itself by launching an energy beam though. After awhile the probe managed to destroy the whole armada.

Before Galaxip 79 could withdraw an armada of more powerful alien soldiers appeared and started attacking. Just when the starfighter couldn't take any more a UGSF fighter called Gyaraga showed up and defeated the armada but more were coming and the two couldn't hold on forever. After a while the group managed to send out a distress message and the whole of the UGSF showed-up.

After the events of the previous two games(Galaxian and Galaga) the war really kicks into high gear. (Gaplus/Galaga 3) The Galaga armada assembled and attacked but the UGSF waves launch an attack of their own for three months the wars go back and forth until finally the battered and weary UGSF pilots drive the enemy into retreat and chase them to the edge of the Solar System ending one of the first wars. But, they all knew that the Galaga Legions would one day return.

After the events of the two games Galaga races have been evolved into three separate species. The third species, after internecine struggle, subjugated the other two species and rebuilt Galaga Empire as Gaplus Empire. The Gaplus sent another fleet of fighters this time led by their Queen to attack Earth again. In this case they used special mutated soldiers for the war. Earth held out desperately but was losing. When all seemed lost special fighters were designed and modified with the ability to capture and utilize enemies' own troops against them! and sent out. Eventually the Gaplus were driven off, and their mutants were destroyed.

Six years after the last conflict the Galaga perfected special particle technology. These objects, code named Icems usurped power into the Galaga soldiers, allowing them to become stronger and fuse like the special Gyaraku fighter servicing Earth (Galaga 88). However this started separating reality into five zones referred to as dimensions. The Planet Galaga was removed from the first dimension accidentally, but remained in the other four. The United Galaxy, with their newest starfighter called Gyaraku with the ability to triple-merging, assaulted the Galaga, and penetrated the dimensions in four fleets. After ridding the Dimensions of the Galaga they arrived at the planet Galaga defeated the Commander, then left leaving the Galaga to make major repairs.

After the original Galaga conflicts, a squad of Gyaraku starfighters runs across a small fleet of Galaga War Machines. At first the Gyaraku have no problem dealing with the fleet but, then the Galaga bring in their new prototype 'Demon' fighter and outmatch the AGAD squad. After multiple losses the Gyaraku squad retreats from battle and regroups, preparing themselves to fight the new threat.

The Galaga return, more powerful than ever. The war rages on across the whole Solar System.

A fleet of Galagas has amassed nearby. For that reason a group of Gyaraga fighters have been dispatched to the scene to investigate, and destroy any Galagas on sight.

Somewhere in universe a U.G.S.F. ship is flying along but suddenly a group of Galaga fighters attack but the ship has a surprise of it's own... A turret gun on it's back! The Galagas are quickly destroyed but more are coming...

The people of the United Galaxy have so much advanced to the point that they venture beyond their own galaxy. But whenever a convoy would leave the galaxy they would be attacked and annihilated by an Unknown Intellectual Mechanized Species (UIMS). Upon hearing this the United Galaxy Space Force kept tabs on the activities of the UIMS. Not long later they found out that a gravity-cannon, code named Canon-Seed had been built in the galaxy of Epsilon Eridanus. Noticing that it was aimed at Earth, they launched Team Dragoon to destroy the alien threat. Fail to destroy the cannon the Earth will be reduce Earth to chunks smaller than California.

Some years after Project Dragoon mankind is again threatened by the Galagas. On the planet Kornious a sudden and inexplicable disruption of gravity has occurred. Bringing the planet to the brink of extinction. A probe has found that many objects beneath the surface of Kornious, an enhanced version of the UIMS that attacked in Project Dragoon, are syphoning the planet's gravity. High-tech Space-Fortress Gourb is planning to redirect the planet's gravity to a star and destroy the UG. So the United Galaxy Space Force launches Team Dragoon to destroy Gourb and the UIMS. But Gourb has already risen from below the surface of Kornious to unleash this gravity burst. Stop Gourb. Failure to do so will result in destruction of Kornious, moon and the sun (and taking United Galaxy with it).

Years after the last war between the United Galaxy Space Force & Galagas the people of the UG have made colonies across the universe. The story starts on a moon known as Zol, where strange things have been happening. Ships have been having trouble taking-off & landing, because of a strange disturbance in the gravity. Eventually the cause is found: Zolgear. Zolgear is an enormous Space-Monster with several others of his species, after going on a rampage and totalling most of Zol it takes off into space towards the Mother Planet, Exia. If Zolgear attacks Exia he will cause death in the human colonies. The new Team Dragoon must stop this threat.

AEf-7 Blowneedle, AGAD and UGSF's combined fruition of advanced anti-Galaga arsenal, was still in experimental phase when, during a test flight it runs across a small Legion of Galagas. Using it's various weaponry it must do everything it can to survive and get back to Earth.

After the last battle against Galagas humankind enjoy a great time of peace. However they don't know that armadas of Galaga are forming outside the Solar System at that very moment. But the highest ranking officers in the U.G.S.F. do know and not wanting panic to break out, assign AGAD (Basically the futuristic version of the CIA) to send whatever they have off to war. But not a whole army since that would be immediately noticed. AGAD comes up with a solution. The AEf-7 Blowneedle, modify it and send to fight off Galagas.

Although the Galaga Legion has been scattered they still remain in sizes large enough to cause damage. The Blowneedle will confirm it Missions, then go and defeat the remaining enemy Galagas.

Several Galaga fighters have amassed on the outside of the Earth atmosphere and once again are preparing to attack. The AEf-7 Blowneedle is to be dispatched to intercept and destroy them before they reach their primary destination: Earth. 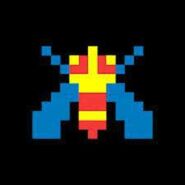 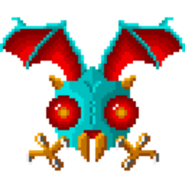 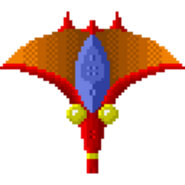 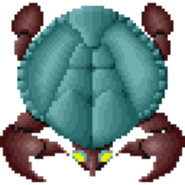 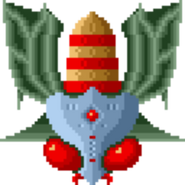 Galagan Commander
Add a photo to this gallery

Retrieved from "https://villains.fandom.com/wiki/Galaga?oldid=3803972"
Community content is available under CC-BY-SA unless otherwise noted.