Member of the Ten Commandments

Truth Commandment (anyone who lies to him or goes back on their word gets turned to stone.)

Galand the Truth, usually simplified as Galand is one of the main antagonists of the anime/manga series The Seven Deadly Sins. He is one of the feared Ten Commandments of the Demon Clan.

Galand has a very destructive, sadistic and battle-crazed attitude. He shows to be somewhat reckless and daring, given that he was eager to fight new enemies despite having all his magical power drained by the Goddess Seal. He had shown to be delighted upon seeing that powerful opponents still existed after being sealed away for 3,000 years.

Out of all races, Galand hates Mages the most, claiming that they always ruin his fun. This is shown when he faced Merlin after the latter tried to attack him with her magic. Aside from this, Galand also shows a fondness for alcohol and was content upon how booze had improved after the millennia he spent away.

Despite his sadistic behavior, Galand does have something of an honorable side to him. He gave Ban a free hit against him to apologise for underestimating him. Galand also offered Escanor to play his Galand Game in exchange for mercy, albeit would've killed him, as well as Ban, Elaine and Jericho had he refused.

After Hendrickson managed to weaken the seal of the Coffin of Eternal Darkness. Galand and his fellow commandments escaped it and appeared alongside Fraudrin (in Dreyfus' body) and the terrified Hendrickson. Zeldris claims they should rest and restore their magical power that had been sapped by the Goddess Seal. The Ten Commandments depart and leave Hendrickson there, after arriving at Edinburgh Hill, they take refuge there. They commented on a powerful magic that had destroyed the castle and the 30,000 foot deep hole which they all concluded to be Meliodas' doing.

Overhearing his comrades state that the Albion was destroyed, Galand becomes content that powerful people still remained and wanted to head into combat. Zeldris stops him however, stating that that pride was the exact same thing that got them sealed in the first place, although Galand just ignores him and proceeds ahead. Galand was then able to leap to Camelot Castle after 72 jumps, which Galand claims that he has lost his edge a bit. Galand soon makes his presence known and the Seven Deadly Sins are unnerved by his mere presence.

Galand reveals that he knows Meliodas and was surprised to see that the latter had not aged at all, he then swings his weapon and destroys a large area around him to make some space. While the Sins and the knights of Camelot fought bravely against Galand, they were ultimately no match for him. Merlin attempts to attack and then trick Galand, but his Truth Commandment comes into effect and ends up petrifying her to stone. While Galand was believed to have killed everyone, it is soon revealed that he was deceived by an illusion from Gowther. After returning, the other commandments do not believe that he was able to kill the Seven Deadly Sins so easily.

Galand and Melascula get drunk.

Galand petrified after trying to flee from Escanor. 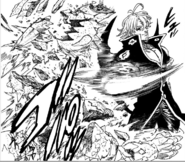 Estarossa destroys Galand.
Add a photo to this gallery

Retrieved from "https://villains.fandom.com/wiki/Galand?oldid=3819568"
Community content is available under CC-BY-SA unless otherwise noted.