Galatea is a recurring antagonist during the second season Justice League Unlimited.

She is a clone of Kara in-Ze aka Supergirl, and was created without her or Superman's knowledge by Professor Emil Hamilton, formerly of STAR Labs, under the aegis of Project Cadmus, a semi-governmental project created to curb and challenge the growing power of meta-humans on Earth, in particular, the Justice League.

She is voiced by Nicholle Tom, who also voiced Supergirl in Justice League Unlimited.

During the final episodes of Superman The Animated Series, the Man Of Steel fell victim to brainwashing by the alien overlord Darkseid, becoming his right hand as he led Apokolips' invasion of Earth. In fighting to stop her cousin, Supergirl was badly injured before bringing him out of Darkseid's control.

Once a close ally of Superman's, Professor Emil Hamilton had been terrified by the power he had used against Earth, and refused to aid Kara in recovering from her injuries. Enraged and with her life on the line, Superman threatened Hamilton into saving Supergirl, and though he quickly apologized, the fear now overwhelmed the Professor.

While saving Kara, Hamilton also retained enough of her DNA to make study of. Shortly after Superman and Supergirl defeated Darkseid and made a ruin of Apokolips, Hamilton sought out forces within the US government deeply fearful and mistrusting of metahumans, taking his research with him. Once there, he supervised the growth of a clone of Kara he named Galatea, after a legendary statue brought to life by the gods (which is, ironically or otherwise, the origin of Wonder Woman as well).

Needing an edge over what he increasingly saw as the enemy Kryptonians, he sped Galatea to full maturity and allowed her to be trained as a killer. The two saw each other as Father and Daughter, and Hamilton took to nicknaming her "Tea".

Hamilton had not counted on the clone and the original sharing dreams based on their activities. This caused pain and confusion to both. Kara saw the murders Galatea was committing and became fearful they were repressed memories of things she herself had done.

Galatea saw much of the simple good Kara did, plus felt her remorse and shame over the killings, something alien to her. In the company of Green Arrow and The Question, Supergirl began to weave together what had happened to her, including having Hamilton twice lie in her face about what he had done. Ultimately, Galatea attacked her and the others, causing her controllers to destroy a training facility to cover up her existence. During the battle, Galatea repeatedly and viciously attacked Kara, resenting her morals and her status as the original. After the battle, Hamilton oversaw her recovery.

Assault On The Watchtower

While Galatea recovered, Cadmus attempted to promote a group of clone heroes known as the Ultimen (homages to the ancillary characters of the 70's Superfriends) but found them harder to control. When Cadmus had been tricked by Lex Luthor into believing the JLU had attacked them, its leader Amanda Waller placed Galatea at the head of an army of Ultimen, all puppets under her will and control, to attack the Watchtower.

With the original seven members having turned themselves in or otherwise seeking to defuse the situation elsewhere, the remaining members stood against the Ultimen, who also moved to sabotage all systems. At the power core, Kara again faced down Galatea, and again was overwhelmed by her greater power, skill and viciousness. At one point, Waller realized Luthor's deception and called off the attack, but Galatea ignored these new orders and moved to ignite and explode the power core.

Kara successfully taunted Tea into sloppiness with taunts about her cloned nature, and status of having been born and bred as nothing more than a weapon. Trapping her enemy between two connective ends of a main power distribution cable, Supergirl brought Galatea down, and with her the Ulltimen army. It seems likely that she died as a result of these injuries, but this is not known for certain, nor is it known if Hamilton tried to seek vengeance for her loss. However, it is shown after her defeat Galatea is still moving as she was left twitching and catatonic, implying she had not been truly killed. 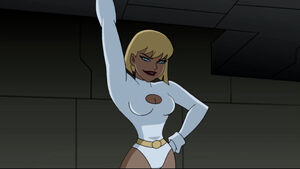 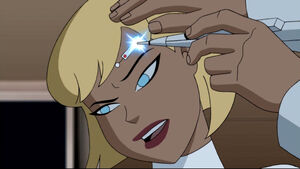 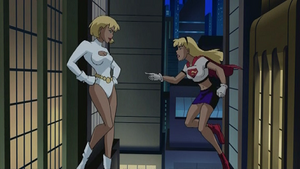 Galatea with her father and creator, Professor Hamilton. 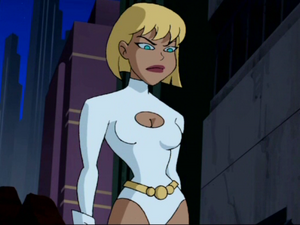 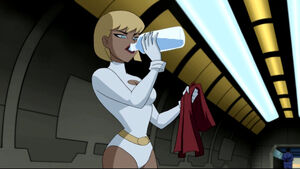 Galatea drinking a bottle of water. 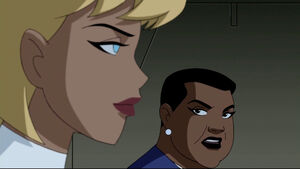 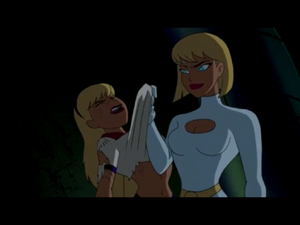 Galatea dominates Supergirl
Add a photo to this gallery

Retrieved from "https://villains.fandom.com/wiki/Galatea_(DC)?oldid=4098246"
Community content is available under CC-BY-SA unless otherwise noted.