Galvatron of the Darklands

Galvatron was the main antagonist of Season 2 of IDW Publishing's Transformers. Unlike previous versions of Galvatron, who was a reincarnated Megatron, this version was a separate entity, being an ancient Cybertronian who was rivals with Nova Prime.

Galvatron was an ancient Cybertronian who was a brutal warrior and had a sibling who would eventually become Acree. He also came from the barbaric age before the rise of the Thirteen [rimes. Galvatron and his sibling Arcee were the slaves of Septimus Prime until Galvatron fought and kill him. Since then, Galvatron rose to power and became a commander of his own squad. He was soon to be called Galvatron of the Darklands and at some point would meet Nova Prime and form a bond with him. They would soon meet up again and be trapped in the Dark universe with his minions Cyclonus and Scourge. In the present time, Galvatron and his group were awakened and revived during the events of the D-void and the Dark Universe. After which he teams up with Nova in an alliance to take over Cybertron and the universe.

After Nova's death, Galvatron would later become the leader of the Decepticons after Megatron quits and becomes an Autobot. He would face conflict within the group due to him not being like Megatron. Soundwave in particular loathes him for not being like Megatron. Galvatron would lead the Decepticons on Earth where he would conflict with Optimus Prime and the Autobots until Optimus was forced to kill him to end his reign of Terror.

Galvatron as a gladiator. 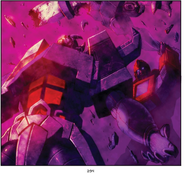 Galvatron is hit by Ironhide.

Galvatron as leader of the Decepticons.