Start a Wiki
Gamao is a large man that resembles a hobo. He is seen to be extremely lazy and often refuses to do any work, even if his survival and duty as a Nightmare depend on it. He transforms into a toad. In his human form he looks very fat.

In Human form he is a medium sized fat man that is something of a lazy bum and is constantly unemployed. In his true form he resembles a humanoid toad who wears somewhat medieval clothing that would not seem out of place in a role playing game. He can grab things with his tongue and sometimes grabs the cures.

His name is from the Japanese "gama", meaning toad. 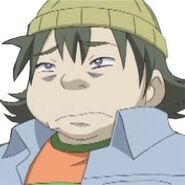 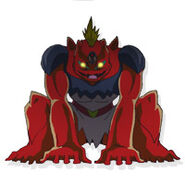 Kawaina Gamao in episode 36
Add a photo to this gallery
Retrieved from "https://villains.fandom.com/wiki/Gamao?oldid=2461986"
Community content is available under CC-BY-SA unless otherwise noted.