The day after his high school graduation, young Steven Sharpe III asked his girlfriend, Helen, to marry him, but she refused until he could prove he was not a habitual gambler like his father and grandfather before him. When Helen ran off with a local boy who had won a fortune gambling on the sweepstakes, Steven quit his job and decided to make a new life for himself. When an armored car crashed right in front of him as a result of a freak accident, Steven decided to help himself to the money that had spilled out of the back of the van, vowing that from then on he would take whatever he could get.

Convinced that the only thing that mattered in his life was luck, and that the lucky people were those who took chances, Steven drank a toast to his grandfather's memory—and to his own new life as the Gambler.

Over the next several years, Steven spent time with a traveling carnival, learning the art of makeup and becoming an expert with throwing knives and pistols. Embarking at last upon his new career of crime, the Gambler quickly became one of the most wanted men in the country.

Sharpe was immediately successful as a criminal. He started off robbing trains and small town banks. Growing bored, he moved East to the big cities. He was spotted in Gotham City by Green Lantern while standing next to his own wanted poster. The Gambler eluded Green Lantern twice using his special Derringer, which could fire ammonia or blackout gas in addition to real bullets. Green Lantern was finally able to catch the Gambler at a horse race where Gambler had turned the horses towards the crowd to cover his escape. Gambler was imprisoned in the Gotham Penitentiary.

Gambler, like most criminals in comics, was extremely adept at escaping from prison. Perhaps his boldest escape was in 1946 when he wrote a note to Green Lantern telling the hero that he would escape prison and then daring the hero to stop him. When the hero arrived to search the prison, he was surprised to see his friend Doiby Dickles in a cell. The Gambler had used his mastery of disguise to confuse Green Lantern. In the confusion, Gambler managed to escape, as well as to free all of the inmates of the prison. He used the real Dickles as a hostage to escape Green Lantern. In another escape, Gambler bribed the executioner at his own electrocution to rig the floor to be electrocuted instead of the chair. This incapacitated the crowd and allowed him to escape.

Gambler clashed with Green Lantern many more times over the years. At one time, he won a gambling vessel and armed it to the teeth. Another time he helped an art collector commit insurance fraud, coming into conflict with Starman and Sandman.

Gambler was one of the original members of the Injustice Society, which planned to kill the Justice Society and control the United States. This group failed miserably and Gambler returned to prison. He escaped from prison again and came into conflict with The Flash and Green Lantern. He even teamed up with the Icicle and the Fiddler in an attempt to kill Starman.

At one point, Gambler married and had a son. He had two grandchildren to whom he imparted much of his criminal knowledge. The last time that Sharpe was paroled, he traveled to Las Vegas. He fell in love with the gambling in the Taj Mahal Casino. What the Gambler did not know was that the games in this casino were rigged, and he soon lost every penny. This final defeat coupled with all of the defeats he had suffered at the hands of costumed heroes was too much for Sharpe. Using his famous Derringer pistol, he shot himself in the head. His suicide was later avenged by his granddaughter, Rebecca, who became the villain known as Hazard. His grandson, Steven V, also became a villain: the second Gambler.

After the death of Steven III, Steven Sharpe V took over his grandfather's mantle as the Gambler. While keeping his identity as the Gambler hidden and masquerading as the Joker, he reorganized and retrofitted the Royal Flush Gang. Under his leadership, the Gang battled the New Titans, but were defeated. (New Titans #68-69)

The Gambler teamed up with Amos Fortune, the Wizard (William Zard), and the second Sportsmaster, created a super-powered "fight club" using members of the Justice Society as combatants. The fight club was broken up by Stargirl, Gypsy, and Vixen. 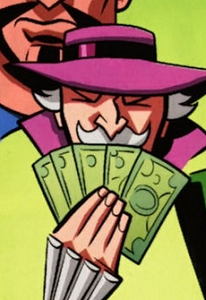 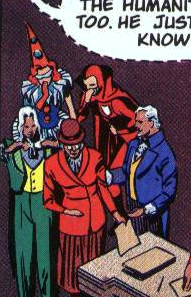