Cosmic Entity
Gamedeus is a Bugster created to serve as the final boss of the video game Kamen Rider Chronicle and a major antagonist in Kamen Rider Ex-Aid.

He was voiced by Masashi Sugiwara.

Gamedeus was created to serve as the ultimate challenge of Kamen Rider Chronicle, with Kamen Rider Cronus being the only one who can stop him, though Gamedeus also has the power to stop Cronus as well.

With this in mind, Parado and Graphite went into the game world of Kamen Rider Chronicle to collect Gamedeus' virus data. Graphite injected the virus into himself in an attempt to replicate it, but it proved too much for him to handle.

When Parado and Graphite faced Cronus, Graphite transmitted the virus into Cronus' Buggle Driver II, resulting in his Pause ability becoming useless. However, Lazer Turbo came in and neutralized the virus within the driver.

As the Gamedeus virus multiplied within his body, Graphite grew ill, but accepted his pain as the price it would take to defeat Cronus and take back Kamen Rider Chronicle. Graphite later used the Gamedeus virus to block Cronus' pause ability in their next confrontation. However, Cronus managed to retain the upper hand by taking control of all the Energy Items.

To prevent the coming of Gamedeus, Cronus initiated aPause before Graphite could be defeated in battle only for Graphite to turn on Cronus due to seeing his move as a "defiling a sacred fight". Graphite allowed himself to be finished off by Ride-Player Nico, thus granting her the last Gashatrophy, Drago Knight Hunter Z.

With all Gashatrophies assembled needed to bring forth Gamedeus, Cronus attempted to initiate Reset but was stopped by the new Energy Item Save developed by Kuroto Dan. With everything in place, Gamedeus finally made his appearance.

After being defeated by the Riders, Gamedeus was finished off by Cronus, who merged with his remains to form Gamedeus Cronus. However, Cronus was separated from Gamedeus by the combined powers of the Kamen Riders. Parado then sacrificed himself to destroy Gamedeus with the Doctor Mighty XX Gashat.

Gamedeus returns as the main antagonist in the stage show set after the conclusion of the TV series. In the battle against the Doctor Riders he transforms into Gamedeus Muteki, a copy of Ex-Aid's Hyper Muteki form.

An A.R. World version of Gamedeus is among five villain leaders summoned by Swartz in the final battle, alongside Evolt, Utopia Dopant, N-Daguva-Zeba and Sagittarius Zodiarts. 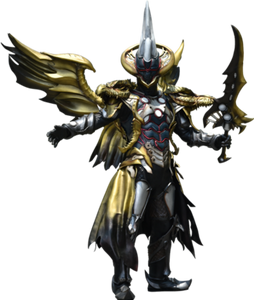 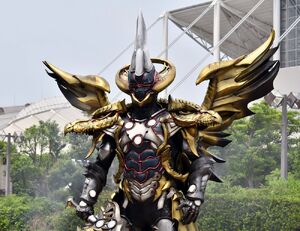 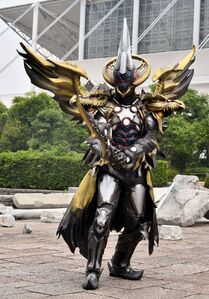 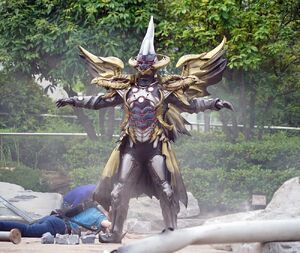 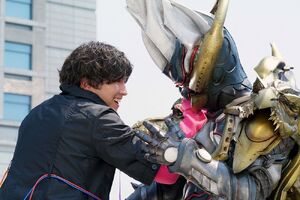