Become a complete being and be with Mezool.

Gamel is one of the five Greeed and a major antagonist in Kamen Rider OOO.

True to his nature as a Greeed, Gamel is extremely greedy, avaricious, materialistic, and full of an unquenchable thirst for possession that leads to consuming the world if unchecked. He is adimwitted and childish creature who is only interested in being by Mezool's side, obeying her without question.

Gamel, like the rest of the Greeed, was created 800 years ago through the Core Medals. Along with the others, Gamel was sealed in a stone coffin until 2010, when Ankh removed the petrified OOO Driver. He battled Kamen Rider OOO a few times prior to being tricked by Kazari for an experiment where he was infused with 7 of Mezool's Core Medals. Though he regains his full form and power, Gamel suffered from an energy overload from having nearly twice the amount of Core Medals in his body as he searches for Mezool. Once finding her, Gamel allows her to absorb him as she attempted to keep their Core Medals' power from going out of control until Kiyoto Maki added Uva's Core Medals into her. After OOO destroys the monster Mezool became, Gamel's Core Medals are divided among Uva and Kazari. While Uva kept his Medals with him, Kazari absorbed Gamel's Core Medals to have his Yummies have a heavy animal element.

Eventually, Uva resolved to revive Mezool and Gamel, the two subsequently betraying him and joining Kazari's side. Some time after Ankh obtains their Core Medals, he enables Mezool and Gamel to assume their complete forms. However, Mezool leaves Gamel to achieve her desire with him finding her by the time she was fatally wounded by OOO. Soon after sending OOO flying, Gamel takes one of Mezool's Unagi Medals out of hope to revive her. After a brief conflict with Maki, who damaged the Sai Medal his mind is in, Gamel proceeds to turn multiple humans and objects into piles of Cell Medals in his attempt to resurrect Mezool. However, Gamel confronted by Kamen Rider Birth and then Birth Proto-Type. Though two Births' Breast Cannons are powerless against him, Gamel fell when the damage his Sai Medal took from Maki takes effect. As his Core Medals begin to shatter, he offers one last piece of candy to the Unagi Medal, and envisions Mezool finally sincerely accepting it. Finally satisfied, Gamel breaks down with only seven of his Core Medals left in existence. 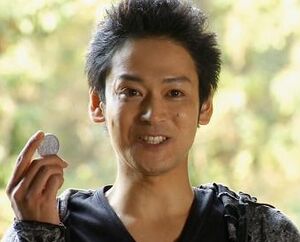 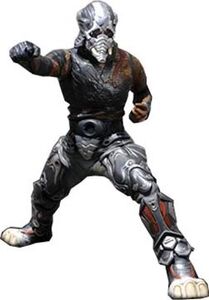 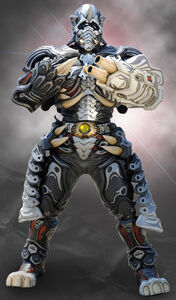